There are very few true highways in Finland where the traffic is separated. Most are located in the south leading from Helsinki.

This is what most roads leading between cities look like; a single lane in each direction where you cross over to the other side to overtake slower traffic. The summer speed limit for these roads is often 100 kilometers an hour. Some of the traffic on these roads is limited to only 80 kilometers and hour. Most are trucks but some are old US station wagons and other similar cars that were imported as trucks and therefore limited to 80 klm/hr for tax purposes. Since nobody wants to drive behind slower traffic, there is lots of passing going on. Some of it is downright dangerous.

Of course, there needs to be no immediate oncoming traffic in order to safely pass. As there is more traffic on the roads there are less valid passing opportunities. That however, does not stop people from passing anyway. This is a typical example, as we are all driving at about 100 kilometers and hour (62 mph): 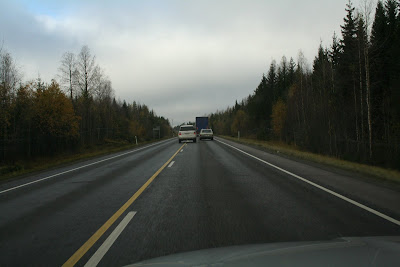 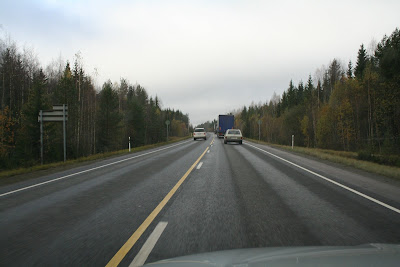 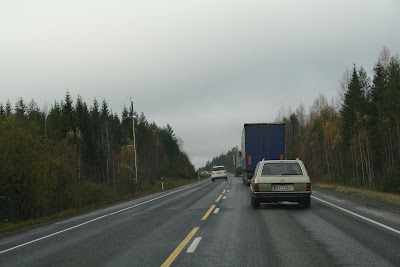 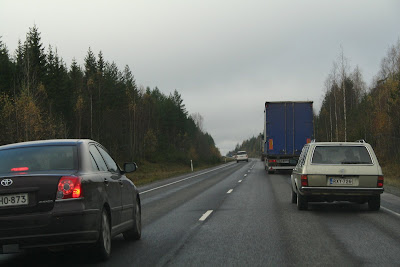 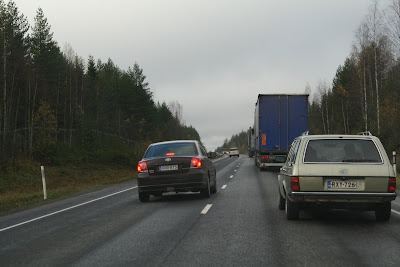 "Where did that oncoming truck come from?!?!?" 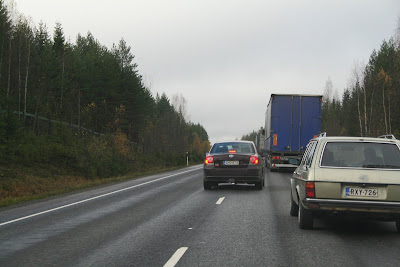 'No problem, I'll just cut this other driver off.' 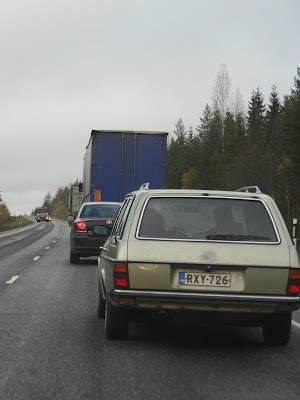 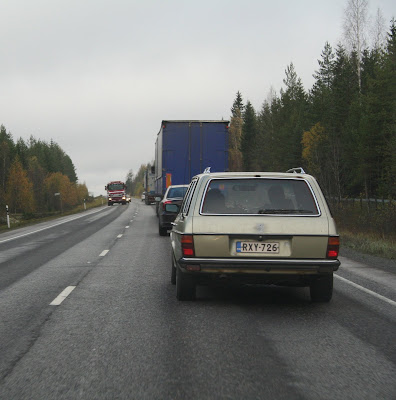 This last passing move below was especially reckless as it was not possible to see what was coming from the other direction due to the hill. As can be seen from the bottom photo, the passing area had ended for that very reason. 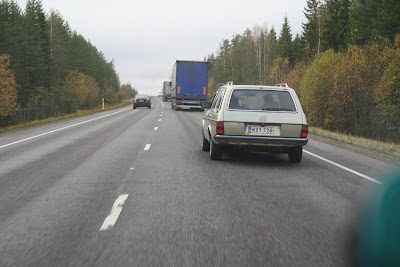 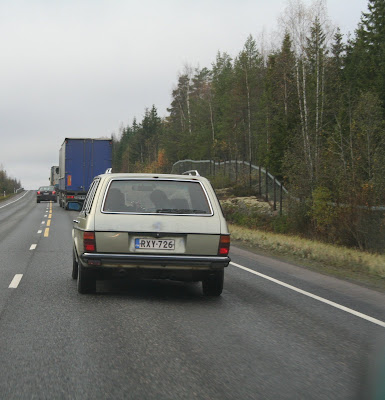 Finland is also experiencing traffic problems in the capital area as well. Driving in Finnish cities is interesting as people will walk into the street without even looking to see if there is oncoming traffic. However, there is good reason to look. See the following story for more details:

One problem in Finland is that cars are seen as the enemy, especially in the cities where people simply refuse to accept that there are valid uses for them. (Such as having two small children and needing to go food shopping.) So they have really pushed to keep speed limits in the cities down in the name of 'safety'.

I lived in Finland for three years, and the one thing I truly missed was not having a car. It was just truly frustrating to go to IKEA or wherever and then try to lug whatever you purchased home on the bus. At least I lived in the Capital and there was good public transport. Still, it took twice as long to get downtown than it would by car, even having to sit in traffic.

Oh, before I forget, try doing the same maneuver above with the road covered in ice! Just make sure that you have good studded tires...
Posted by Fred Fry at Thursday, October 18, 2007

Fred - there is very good reason why cars are "seen as the enemy" in downtown Helsinki by pedestrians and cyclists, and thats because so many people become dicks when they start driving and thoughtlessly risk others safety. There is no respect for zebra crossing in Finland, you can stand there all day waiting for someone to stop but they won't. Until you step or start to cycle onto the crossing whilst trying to make eye contact with the driver they will just ignore you. You have to demand your right, and be ready to jump out the way if the ass is chatting on his phone or otherwise not looking.

I think in the last four years I've cycled about 10-11,000 kms in Helsinki - I average about 100 kms a week so spend a lot of time thinking about traffic and just about every day some idiot driver will make me swerve or brake hard not stopping at a bike path crossing as they should.

I also think your comment that people refuse to see cars as having use is wide of the mark as car ownership is steadily increasing: http://www.hs.fi/english/article/Sharp+increase+in+second+and+third+family+cars/1135227451284

The speed of public transport in comparison to cars depends where you live. Where I used to live near a train station, the train was always quicker to town plus no parking. Nowadays where I live a car will be a bit quicker if not at rush hour, but on busy mornings its no quicker, and some days I can cycle the 20 kms as fast as the bus/car takes. I guess you were living somewhere with crappy connections if the car was twice as fast.

Thanks for the comment. I just spent the day Friday driving to Turku and noticed that while I would give bike riders extra room on the road as I passed them, cars behind me did not bother to extend the same courtesy.

Funny, the thought came to me that as a pedestrian in Helsinki I hated crossing the street where there was high car traffic, but I also found bicyclists just as annoying and dangerous. So while I agree with your concerns, I think all three groups need to make compromises. Cars are not the only ones at fault.

I was living in Siltamaki (Then Hakaniemi) and was going to Haaga and had to go first to the center and then back out again. It is one design flaw of public transport in Helsinki that it is setup for movement to and from the center. I understand that is getting better now. However, I do not consider bikes a valid substitute for transportation. Sure it works for you and for many others, but it is not a realistic substitute for most. For me, I refuse to bike in the winter. Not because of the cold, but because I do not consider it safe with all the ice about. And yes, people do get hurt. Somewhere it was noted that you are five times more likely to get hurt biking in Helsinki that walking.

Thanks for pointing out the HS article about car ownership. I was planning to write about it. Do note that they blame increased car ownership as a reason against improving bus service. This completely ignores the fact that bus service in the countryside is in my opinion poor (once an hour or worse). My mother in law recently got a car because she was tired of being trapped at home. When she was able to get out, she complained about being held prisoner to less than generous time schedules. It is kind of silly really to think that it is an either-or choice. Take the Washington, DC area. Public transport there is as good, if not better than southern Finland. We only own one car, and I am the one who normally has it. However, if my wife decides that she would rather have it, then I am the one taking the bus.