About Those Trillions Being Held In Tax Havens Around The World...

Given that about half of all Americans are not paying taxes and are now receiving benefits from the Government, and with things even worse in other countries, politicians and the press are trying to place blame on the lack of an unlimited supply of money to pay for these social programs on rich people who are somehow hiding assets from taxation in tax havens around the world:

The Tax Justice Network, a campaign group, estimated last weekend that as much as $21 to $32 trillion of financial assets are sheltered in offshore tax havens, representing up to $280 billion in lost income tax. - CNBC

Worse, look at the study's own estimate of lost tax revenue: 'up to $280 billion in lost income tax'. While in itself a large amount, it is still a mere 1% of the total. At the very least this story is just more evidence that the real problem is excess spending and not enough taxation (other than the growing percentage of the population escaping taxation entirely, and that is not the rich who already pay and pay more...).

Even worse, the potential amount of last tax revenue, assuming the 'best case' scenario, is not even 1/4 of the US 2012 budget deficit of 1.2 Trillion dollars. So even if this lost income tax could be recovered AND IF the US got all of the proceeds, it would not even make a difference in stemming the US's march towards bankruptcy. Greece itself would need just about  the whole amount to help dig itself out of their current fiscal crisis.

Here is a grassroots campaign video making the case against re-electing President Obama.

As found on Ace of Spades Blog.

You know, one thing that keeps Americans faith in their legal system is the belief that everyone is treated fairly. That said, the Obama Administration has been busy picking favorites. Americans are being harassed more and more, while at the same time our supposed leaders have been turning a blind eye when it comes to the offenses committed by their supporters and other interest groups, especially illegal aliens. Take the following two stories: Americans threatened with huge fines for daring to import chocolate eggs, available most everywhere else.

Chris Sweeney and his husband were driving home to Seattle after a recent trip to Vancouver when they were stopped at the border for more than two hours and threatened with thousands of dollars in fines for dangerous contraband in the trunk of their car. Their suspicious cargo? Half a dozen Kinder Surprise chocolate eggs, each filled with a tiny plastic toy - a childhood favourite in Canada but an illegal choking hazard in the United States. "I thought (the American border guard) had done his search and hadn't found anything, and he was joking with us," Sweeney, 35, told The Canadian Press in an interview Wednesday. "He wasn't joking." The popular German chocolate eggs are not sold in the U.S. because they are considered a choking hazard. They are also banned because the treats are considered adulterated food by the U.S. Food and Drug Administration. Sweeney said a border guard told him and his husband that they could be fined $2,500 per egg, and then ordered them to head to the port of entry, where they waited for more than two hours. "We really didn't know what was going to happen," he said. "I didn't know if maybe this was some really important thing that I just wasn't aware of and they were going to actually give us the fine of $15,000." But once inside, Sweeney said border staff later brushed off the offence and merely told them never to bring the Kinder Surprise eggs across the border again. - Canada.com


Illegal aliens learning to fly commercial Airplanes. No, not the 9/11 hijackers. This is going on today!

A loophole in U.S. Transportation Security Administration (TSA) regulations allowed the agency to approve flight training for 25 illegal aliens at a Boston-area flight school owned by yet another illegal alien, according to the Government Accountability Office (GAO). Eight of the attendees had entered the United States illegally, while 17 had overstayed their visas, according to a GAO audit, CNSNews.com reports. Six of the illegals obtained pilot’s licenses. The discovery of the flight school issues began when local police — not federal authorities — stopped the school’s owner on a traffic violation and then were able to determine that he was an illegal alien, according to CNSNews. - Newsmax

Are you kidding me? Teaching and issuing pilot certificates to illegal aliens. I thought this lesson was learned after we taught the 9/11 hijackers how to fly. Clearly not. Because after all, heaven forbid we do anything like enforce US immigration law.Maybe the illegal aliens can bring some Kinder Eggs with them.

A couple years ago I had a post 'Helsinki City Apartment Bathroom' noting how small the bathroom in my Helsinki rental apartment was. Well, that bathroom was roomy compared to the closet of a bathroom I have in my current apartment. One thing to keep in mind when looking at these photos - the bathroom is SMALLER than it looks in the photos. It is so small, you can't turn around in the bathroom.

Oddly enough, this is a very roomy apartment. We are in downtown. Have two bedrooms and a large shower room. 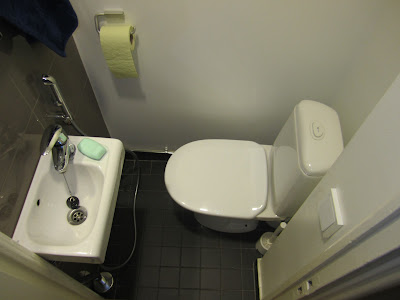 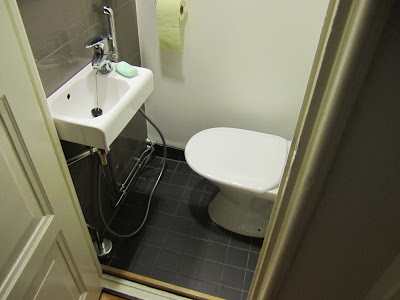 See here 'Helsinki City Rental Apartment - Photos' for photos of my downright favorite rental apartment. I'm not completely sure, but I think this might be the second best rental apartment. Anyway, if you ever plan on staying in Helsinki for a week or more, you should consider rental apartments as an alternative to a hotel, especially if you are traveling with children.