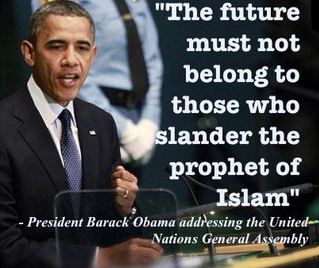 Slowly the facts are coming out about what happened during the Sept 11 attack on the US Consulate in Benghazi. This attacks were initially blamed on some video that muslims rioted over because they were told by their peers that the video insulted Mohammad.

There are no words that excuse the killing of innocents. There is no video that justifies an attack on an Embassy. There is no slander that provides an excuse for people to burn a restaurant in Lebanon, or destroy a school in Tunis, or cause death and destruction in Pakistan. - Link

President Obama's entire UN speech reinforces the lie created by Hilary Clinton and his State Department, that the deaths of 3 Americans were the result of some video that nobody saw. His UN speech only mentions terrorists once, and that is in reference to Iran. Instead, he refers to the terrorist attack on the US Consulate as some mere violent religious outrage. The President was right in that there was no video that justified an attack on a US Embassy. However, terrorists do not have to justify their actions.

This growing scandal might even bring down the Obama Administration. Even better if it ends Hilary's 2016 run for the White House. As it stands, both persons were very likely fully knowledgeable of both the facts and the lies put forward.