Out comes word that the President will not call for raising the Retirement age as part of controlling Government spending:

The direction of Obama's speech became apparent over the weekend, when the White House informed Democratic lawmakers and advocates for the elderly that he would not endorse the commission's recommendation to raise the retirement age and make other cuts to Social Security - the single largest federal program.
Liberals, who have been alarmed by Obama's recent to shift to the center and his effort to court the nation's business community, applauded the decision, arguing that Social Security cuts are neither necessary to reduce current deficits nor a wise move politically. Polls show that large majorities of Americans in both parties - even in households that identify themselves as part of the tea party movement - oppose cutting Social Security benefits. - Washington Post

This is unfortunate, because there is a fair way to explain why the retirement age should be raised. Simply put, most Americans are living longer. In many cases much longer. And as retirees live longer they put a greater strain on Social Security (as well as other parts of the Government). We need to deal with that strain somehow. One way is to raise the retirement age.

Another way to fix Social Security is to raise worker contributions. I am only in favor of that option if we overhaul the entire program, introducing private accounts. (See my post: Democrats Hate the Idea of Private Social Security Accounts - Because They Cannot Steal From Those Accounts...)
-------------------- 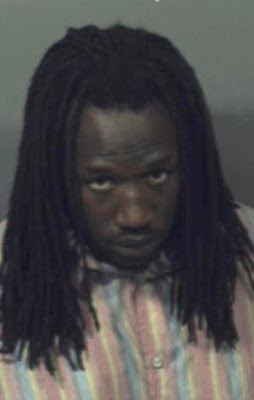 Here's a great idea. Lets take violent criminals with a history of escapes and give them vacations from jail. What can go wrong:

An inmate who had already escaped from authorities once is on the run again after he was given a leave of absence from a federal penitentiary to attend a funeral in the District.
U.S. marshals say Theodore Dewayne Riley failed to report to officials in D.C., and never returned to the Federal Correctional Institution in Memphis, Tenn. A warrant for him was issued Dec. 1. He had been serving a three-year sentence for felony possession of a firearm for an incident that occurred in the District in 2008.
It's not the first time that Riley has escaped from custody, marshals said. He pulled a similar move back in 2000 when he failed to report to a community care facility in D.C. while serving time for a 1999 aggravated assault conviction, said Marshals Deputy Tony Gause.
Now, members of the Capital Area Regional Fugitive Task Force are looking for the 30-year-old Riley again.
"With a long history of violence, Riley is obviously a threat to the community and is to be considered armed and dangerous," Gause said. "We need the community's assistance in locating him before he puts other innocent people in harm's way."
Riley has other arrests for gun and drug charges and for destruction of property.
He is described as a black male with dark complexion, standing 5-feet 9-inches tall and weighing 155 pounds. He is known to hang out in Northwest Washington in the Sursum Corda complex at First and M streets, and has relatives in Southeast D.C.
Anyone with information regarding Riley's whereabouts is urged to call Gause at 202-427-0183 or the U.S. Marshals Service at 301-489-1717 or 800-336-0102.
Tips from readers of The Washington Examiner have led directly to 24 fugitives since 2008. Marshals wants to make Riley the 25th.
The Capital Area Regional Fugitive Task Force, run by the U.S. Marshals Service, is composed of 30 federal, state and local agencies from Baltimore to Norfolk. The unit has captured more than 33,000 wanted fugitives since its creation in 2004. - Prisoner with escape history let out for funeral and gets away - Washington Examiner

This is just one example of how part of our criminal problems are actually brought on us by our own Government. Maybe it's me, but if for some reason these people want to attend funerals, they should keep themselves out of jail. they are not going to let you out if your relatives are sick. So the same policy should be maintained in cases of death as well.
One more thing. The official(s) responsible for letting this criminal out should be held accountable. Maybe they should serve his term until he is returned to his cell. That will be a good incentive to ensure that only those trusty enough will be let out.
--------------------

The MV LEOPARD was recently boarded by pirates. Apparently the crew had managed to disable the vessel which resulted in the pirates taking the crew off the vessel as hostages.

The crew of the coaster Leopard seems to have been kidnapped by the pirates that attacked the ship earlier this week. When a Turkish warship arrived at the Leopard there was no sign of the crew (two Danes and six Filipinos) or the pirates. The Leopard was simply drifting without any crew. Nato forces believe the crew has been transferred to a Taiwanese fishing vessel, which had been seized earlier by pirates and used as a mother vessel for attacking commercial ships.

The ship’s owner, Shipcraft A/S, in Hørsholm has not been available for comment on the situation. - Shipgaz

This is not the first time a Danish-Flag vessel with a crew of six has been taken over by Pirates. The MV DANICA WHITE was captured by pirates back during the summer of 2007. they had a crew of six. Amazingly, the Danish Maritime Administration blamed improper watchkeeping as part of the reason why the vessel ended up in the hands of pirates:

My post on the issue, DANICA WHITE Hijacking - 'Minimum Safe Manning' Partly to Blame, takes issue with this given that the Danes permitted the ship to be crewed with so few seafarers to the point of being impossible for the crew to maintain a proper watch.

Just watch, when this is all over, the crew of the LEOPARD will be blamed for losing control of their ship and being taken hostage by pirates.
Here is a photo from the NATO site showing the amount of barbed wire the vessel had wrapped itself in. This of course does little good if the pirates manage to get the ship to stop for any reason. 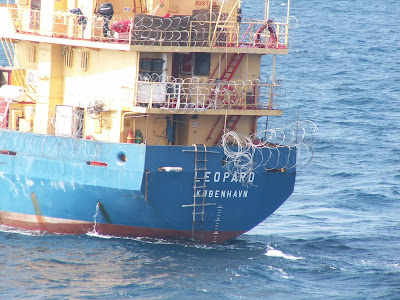 And here is a NATO photo of help arriving too late. 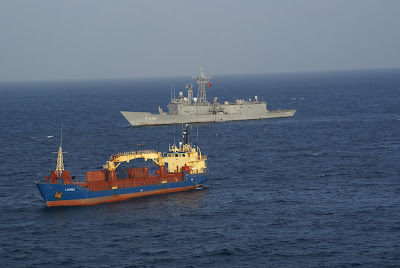 The vessel apparently had a Citadel space. I wonder what happened and how the crew ended up in the hands of pirates if they did indeed have a space and managed to get into it. Of course these spaces are only as good as their ability to keep the pirates out until help arrives. Otherwise the pirates can just wait until you run out of food or water, or worse create a situation where you want to get out, such as setting the vessel on fire or attempting to sink it. NATO does note the following in regards to coming to the rescue of crew under attack by pirates:

The use of a CITADEL DOES NOT guarantee a military response. Before owners, operators and masters commit to a policy that recommends the use of a citadel, it is important to understand the criteria that military forces will apply before a boarding to free the ship can be considered:

The following points should also be taken into consideration when preparing CITADELS:
- PDF Link