Let's try this again. I previously wrote about the pipeline in my post 'Keystone XL Pipeline - You Don't Get a Much Better Example of How Anti-Business (and Petty) This Administration is'. I noted:


There is one thing that really gets me about the battle over whether the Obama Administration will permit the building of a pipeline to carry oil from Canada to oil refineries in the United States. That is that this battle is going on at all. Really, at it's simplest level, the Keystone XL pipeline is a business project. A pipeline. - Link

Today, the President once again came out front and center and killed this business project. Surely, the non-union portion of his Liberal base is celebrating this victory. But be careful what you wish for, because killing this oil pipline is only going to force the Canadians to transport this oil in more environmentally risky ways.

This oil will be moved to market, and by removing the safest and cheapest transport method will merely result in this cargo traveling via other means to get to refineries. The main alternatives to moving liquids by pipeline are moving them by tanker truck, ships, barges and rail cars.

This oil will most likely be sent through existing pipelines to be exported from Canada by tanker. In which case others will benefit for America's stupidity. The Merchant Mariner in me is just fine with killing off any pipeline as pipelines 'steal' cargo from tankers. Mobil Oil used to have a number of gasoline tankers bringing gasoline from Texas to the Port of New York. A pipeline put at least five tankers and their crews out of work. So you can bet that the tanker companies are not complaining about today's decision.

Better yet, some of this Canadian oil may still end up at the same refineries that it was destined for via the pipeline. See the map below to get a reminder of how far oil from the Middle East travels to get to the US. Taking this oil from Canada is a no-brainer, even if it has to travel a more expensive, more dangerous route. Really, just how do they think we get oil pumped out of the ground in Alaska? 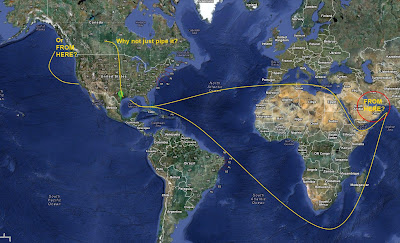 Liberals however like to pretend that this oil will somehow just remain in the ground if they put up enough roadblocks in the way of getting this oil to market. This of course will never happen


As a reminder, the dispute is about whether a pipeline will be built. And it's not like this is a new idea. As the map below illustrates, the United States is already covered by pipelines. Then there is the Trans-Alaska Pipeline, built in one of the world's most sensitive, and environmentally brutal climates. Nor would this be the first oil pipeline from Canada either. The only reason this pipeline is having problems is because this is the first time the US Government was being run by an Administration that is both anti-business, anti-jobs and anti-oil. The President was given the opportunity to kill a project that will bring energy into the US from a friendly neighbor.

Too bad we can't run our cars and heat our homes on hope.

So here we have Congresswoman Nancy Pelosi with her first comments of the year:

Q: Leader Pelosi, one more please. It looks like the Obama reelection campaign may criticize Congress as part of its effort. Would you feel you are being thrown under the bus if they do that?

Leader Pelosi. Well, I think the President has been clear that it is the Republican Congress that has been an obstruction to job creation this year. Just think, for this year, you take me back to the fact that it is one year since they were sworn in as the majority, one year without any major jobs initiative, any jobs agenda; starting the year with the Ryan budget, starting their initiative with the Ryan budget which broke the guarantee for Medicare, which did not create jobs and which did not reduce the deficit. - Link

Not being able to think of anything new, or apparently interested in documenting her (and her party's) failure to do anything about jobs in the years that she held control of the House of Representatives, she has to go and attack Congressman Ryan's budget proposal as was done last year. Any the Democrat's attacks on the Ryan budget proposal were declared the biggest lie of 2012:

It's not as eagerly awaited as Time's "Man of the Year" was back when people paid attention to Time, but PolitiFact's "Lie of the Year" nonetheless manages to generate a lot of chatter, aimed as it is at those who chatter for a living. This year almost all of the chatter was negative, as the St. Petersburg Times's self-styled "fact checking" operation, which usually leans left, tacked to the right, naming as its "Lie" the claim that "Republicans voted to end Medicare." The reference is to Rep. Paul Ryan's reform proposal, which passed the GOP-controlled House as part of a budget resolution before being rejected by the Democratic Senate - Wall Street Journal

And yet, even after the publicity of this story just a couple weeks ago, Pelosi is out there repeating the same lie. And the lies:

• They ignored the fact that the Ryan plan would not affect people currently in Medicare -- or even the people 55 to 65 who would join the program in the next 10 years.

• They used harsh terms such as "end" and "kill" when the program would still exist, although in a privatized system.

• They used pictures and video of elderly people who clearly were too old to be affected by the Ryan plan. The DCCC video that aired four days after the vote featured an elderly man who had to take a job as a stripper to pay his medical bills. - Politifact

And don't forget the video of 'Ryan' pushing Granny over the cliff in her wheelchair. Of course they are doing this to paint the Republicans as the ones who are killing off Medicare. Strangely enough, they do this by resisting any reform that might prevent the system from going bankrupt.
--------------------

I had been thinking this for a while now and John McCain's endorsement of Romney seals it. We ended up with McCain as the Republican nominee in 2008. Nobody wanted him and all that did was help the current president win his job. Now four years later we are looking at going down the very same road with Romney. And for what it's worth, the guy that nobody wanted in 2008 comes out to back the guy that nobody (really) wants in 2012 (other than his strong base). Look, no matter who is the nominee for the Republican party, I'll be voting for him in November. I was asked over Christmas by a liberal cousin of mine who I liked on the Republican side. My response was simple. I like the guy who gets nominated. After all, it doesn't matter while one I support, he'll (and every other Democrat) will have problems with my choice. So, I choose the nominee. It could be Satan (or Ron Paul, God Help us) that's the guy i'll be voting for. Looking back at the 2008 Primaries, it seems that I was all the willing to vote for Romney, for no other reason that he would be better than McCain. Go figure:

I'm left with Romney and McCain.


My first thought is to write in Thompson. No, that's not right. Not unless there is some sort of massive write-in organized, and that will never happen. So I guess I will vote for Romney. Now I just need to get excited about it. Well it will be excitement enough if he beats whoever the Democrats push forward. And when that happens, there will be no shortage of lost marbles on the left. That has to be worth a good laugh.

Rusty at The Jawa Report expresses a strong case for supporting Romney in his post "Fredheads, It's Time to Support Mitt". Thanks Rusty. - 22 Jan 2008

2012 is only just starting. Given that Gingrich has atoned for his ad with Pelosi, he is a very viable option, as is Santorum. So lets see who we line up to support this year. After all, nobody expect McCain in 2008...