I wrote before, it was stupid for President Obama to reject the Canadian oil pipeline. Now comes news that the damage to the country as a result of the President's rejection of the Keystone XL oil pipeline very well might be permanent as Canada has found a willing buyer for their oil in China. 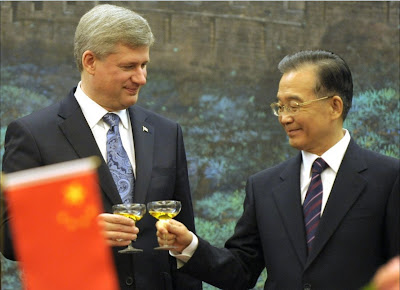 BEIJING — The prospect of Canada entering free-trade talks with China is suddenly being discussed, as Chinese leaders indicated during Prime Minister Stephen Harper's visit that they are prepared to head down that path — even though Canadian officials aren't so sure this country is ready for the jump. The development came as China and Canada declared Thursday that bilateral relations have reached "a new level" following a series of multibillion-dollar trade and business agreements to ship additional Canadian petroleum, uranium and other products to the Asian superpower. - The Province

The Canadian oil was always coming out of the ground. Refusing to approve a pipeline to deliver this oil to US refineries is nothing other than ACTING AGAINST THE BEST INTERESTS OF THE UNITED STATES.