With the President demanding that Congress pass his latest job stimulus bill, keep in mind that there are very few jobs that President Obama and his fellow Democrats actually like. These jobs include:
Of course they like their own job, but they are not going to lift a finger to help you get one of those.

Other than union jobs for private employers, all of the kinds of jobs that the Democrats like require the rest of us to pay taxes to that they have the money to pay the salaries for these workers. This is the heart of the problem. Government needs more private workers so that more tax revenue is collected to pay the salaries of Government employees. So it should be an easy task to pass a bill that will result in stimulating the creation of jobs. One problem, Democrats hate most kinds of private jobs. These jobs include:
Think I am being dramatic? Here is an example of the President and his Democrat allies idea of 'Stimulus':

New documents obtained by Judicial Watch show acting National Labor Relations Board General Counsel Lafe Solomon joking that the NLRB's suit against Boeing would kill jobs in South Carolina. Commenting on a Planet Labor article whose headline suggests Boeing might not be able to open its new plant in South Carolina because of "antiunion behavior," Solomon writes:

The article gave me a new idea. You go to geneva and I get a job with airbus. We screwed up the us economy and now we can tackle europe.

The NLRB is upset that Boeing decided to open a second assembly plant not nearby it's current union-staff plant, but instead in worker friendly South Carolina. The Government's position is that Boeing did not have the right to build a new plant where it wanted. Nancy Pelosi has even declared 'that Boeing should either unionize its production facilities in South Carolina, or shut them down entirely.' (Link) Well, you can bet that Boeing won't union it's production. I suspect that they would first simply decide to move the assembly plant outside the United States. This is a perfect example of how many US jobs are not running overseas, they are in fact being driven overseas, by over-regulation and a Government that is hostile to business.


As for stimulus to encourage more jobs, as I said before, it is easy for the Government to get this started:

The President can easily set in motion a huge business boom. All he need do is get out of the way of energy production of oil, coal and gas and power plant construction, whether it be natural gas, coal, nuclear or hydroelectric. These two things will then spur the demand, and funding, for improved infrastructure, simply to get the supplies to help build the oil, gas and electric businesses. If we can get this moving, lots of other industries that support this will follow. - Fred Fry, Oct 2011

Validation of my comments can be found in this recent Wall Street Journal post:

So President Obama was right all along. Domestic energy production really is a path to prosperity and new job creation. His mistake was predicting that those new jobs would be "green," when the real employment boom is taking place in oil and gas. The Bureau of Labor Statistics reported recently that the U.S. jobless rate remains a dreadful 9%. But look more closely at the data and you can see which industries are bucking the jobless trend. One is oil and gas production, which now employs some 440,000 workers, an 80% increase, or 200,000 more jobs, since 2003. Oil and gas jobs account for more than one in five of all net new private jobs in that period. The ironies here are richer than the shale deposits in North Dakota's Bakken formation. While Washington has tried to force-feed renewable energy with tens of billions in special subsidies, oil and gas production has boomed thanks to private investment. And while renewable technology breakthroughs never seem to arrive, horizontal drilling and hydraulic fracturing have revolutionized oil and gas extraction—with no Energy Department loan guarantees needed. - 'The Non-Green Jobs Boom - Forget 'clean energy.' Oil and gas are boosting U.S. employment.' - Wall Street Journal

This growth in jobs is despite the Government's best efforts to kill 'carbon' jobs. Just image the growth in jobs that could be attained it the Government merely got out of the way and let industry bring these energy sources to market as well as permit utility companies replace their aging power generation equipment with new power plants of their choice. All of this can be done at no cost to the Government. The Democrats will not let it happen though, because to do so will result in lower energy costs, which will surely bankrupt more of their 'Green' pet projects.

Surprise, surprise, a triple murderer with a history of escape, has yet again made a mockery of the Finnish Prison system.

In 2009, Fouganthine was granted a conditional release (Note: from a 'life sentence' for triple murder), but was re-arrested in Finland in June of this year and sentenced to four and a half months in prison for drunken driving and making illegal threats with an air gun. On Wednesday morning, Fouganthine failed to show up for his prison work duty at the minimum security Kerava prison in Finland, the Finnish Daily Ilta Sanomat reported. According to reports in the Finnish media, the escape comes shortly before he was set to be released. - Local.se

A sad fact is that he committed three murders while on conditional release from other crimes. He has a history of escapes as well as ongoing issues regarding theft as well as threats. This is a man who killed three people, one a child, over a bicycle he stole. The man should have been executed for his crimes. However, apparently more sophisticated people think that he should be given an unlimited number of extra chances. The only question I have is just when is he going to kill again. He is already threatening people. It will not take much if someone challenges him. Knowing Finland, there is a pretty good chance that this will happen eventually. Alcohol consumption basically guarantees it.

For a Change - School Encourages Wearing the Flag

There seems to be no shortage of news stories covering what you could call Us 'Flag Hate'. Stories from where students have been sent home for wearing clothing with a US flag on it, to stories of the US flag being removed from classrooms and even replaced with the Mexican flag. But all is not lost. Here is a photo of the message send home today with my child. 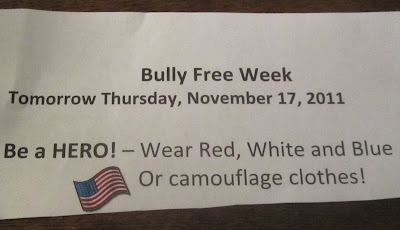 Be a Hero! Wear Red, White and Blue or camouflage clothes!
Keep in mind that I live in a very Democrat-friendly suburb of Northern Virginia. That said, I have never seen anything at the school other than efforts to instill patriotism and pride for the US in the very diverse student body. So there is hope for all of us yet! (And not for anything, I get along very well with all of my neighbors regardless of which way they lean politically)
--------------------