FATCA is a law in the US. The long name is 'Foreign Account Tax Compliance Act'. This law is causing havoc for Americans who either want or need bank and financial accounts in other countries. This is because FACTA requires foreign banks to tell the US Government information on any accounts that may be held by Americans.

The Foreign Account Tax Compliance Act (FATCA), Subtitle A of Title V of the Hiring Incentives to Restore Employment Act (HIRE), enacts Chapter 4 of, and makes other modifications to, the Internal Revenue Code of 1986, the tax law of the United States. FATCA has a few main parts:
The reporting requirements are in addition to reporting of foreign financial assets to the US Treasury Department, particularly the "Report of Foreign Bank and Financial Accounts" (FBAR) for foreign financial accounts exceeding US$10,000 required under Bank Secrecy Act regulations issued by the Financial Crimes Enforcement Network (FinCEN). - Wikipedia

The stated goal of this law is to catch tax evaders. However, this law has turned thousands of law abiding Americans into victims. This is because many banks are deciding that it is better for their business to get rid of all their American customers, than it is to meet the requirements of this new law. This is an example of what Americans living in the US and abroad are receiving:

The termination is due to the changes in the American legislation, which means that U.S. residents or those liable to pay taxes in the U.S. will no longer have the option to remain customers at Nordnet. We regret the need to terminate Your account.

During the period of notice both parties must comply with the general terms and conditions.

The termination means that You need to transfer or sell Your securities at Nordnet and transfer Your cash balance from Nordnet to another service provider. Nordnet does not charge a fee from the transfer of securities or cash. Below You can find further information on how to proceed.

In case our information of Your U.S. residency or taxpayer status is incorrect, we kindly ask You to promptly contact us via asiakaspalvelu@nordnet.fi or by phone +358 20 198 5898. Our customer service is open on weekdays 9–18.30 (Finnish time).

This 'example' is a copy of the termination notice sent to me. I have a dilemma here as the account has barely any money in it and it will probably cost more money for me to close out the account than it is worth. Hell, the biggest asset this account probably has is the potential for me to file a discrimination suit in Finland as this firms action's appears to be based solely on my nationality. I do have other accounts, but combined, they do not add up to an amount requiring me to report these foreign assets to the IRS on my tax return. That said, my other accounts are very useful for me as my wife has relatives there and we spend a good deal of time in Finland each year and having a domestic bank account makes life much easier when paying bills and renting apartments. I am concerned that those banks will also attempt to close our accounts. No matter, I will get by with or without them. As for Nordnet Bank, no grudge against them. I do not need their services. I will use another company. I used to recommend them to my Finnish friends, but now will point them elsewhere. This will however just waste time during my next visit.

There are however many Americans living overseas who simply cannot manage without a local bank account. They are the primary victims here. The US Government should be ashamed of this kind of damage it is doing to law-abiding citizens. Oddly enough, this kind of stupidity is going to result in Americans putting money in bank accounts under the names of others, in effect creating the hidden money that this law was attempting to unearth!

Obama's 'Gutsy Call' - Not Even At The Table

President Obama is once again using the killing of Osama Bin Laden as a prop in his reelection campaign. I have no problem with the President point to this as one of the accomplishments of his Presidency. After all, it is one of the few actual accomplishments that most Americans give him credit for. However, for some reason, the President's campaign staff are now suggesting that Presidential candidate Mitt Romney would not have given the go-ahead to kill Bin Laden, distorting a comment of his as their evidence. Mitt Romney's comment is so taken out of context as his actual statement is that killing any one terrorist is not not a strategy, but a starting point. Basically he is advocating a much stronger response than the assassination of one man.

Lets not forget that the President's 'Gutsy Call'  was given only after sleeping on it, a full 16 hours after being asked. Now maybe Mitt Romney would have said no, but I seriously doubt he's take a nap first. (Mitt Romney in response to the Obama Campaign allegation notes that even Carter would have made the call to take out Osama.) 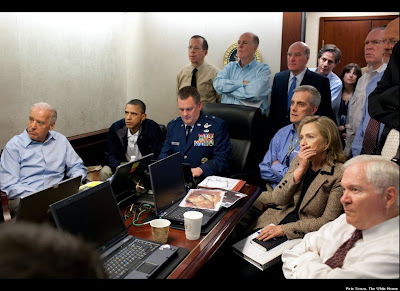 Now take the following story that appeared on the internet shortly after this photo appeared that comments on the situation leading up to the photo, keeping in mind that there is nothing to back up the allegations made in the story:

I have been told by more than one source that Leon Panetta was directing the operation with both his own CIA operatives, as well as direct contacts with military – both entities were reporting to Panetta only at this point, and not the President of the United States. There was not going to be another delay as had happened 24 hour earlier. The operation was at this time effectively unknown to President Barack Obama or Valerie Jarrett and it remained that way until AFTER it had already been initiated. President Obama was literally pulled from a golf outing and escorted back to the White House to be informed of the mission. Upon his arrival there was a briefing held which included Bill Daley, John Brennan, and a high ranking member of the military. When Obama emerged from the briefing, he was described as looking “very confused and uncertain.” The president was then placed in the situation room where several of the players in this event had already been watching the operation unfold. Another interesting tidbit regarding this is that the Vice President was already “up to speed” on the operation. A source indicated they believe Hillary Clinton had personally made certain the Vice President was made aware of that day’s events before the president was. The now famous photo released shows the particulars of that of that room and its occupants. What that photo does not communicate directly is that the military personnel present in that room during the operation unfolding, deferred to either Hillary Clinton or Robert Gates. The president’s role was minimal, including their acknowledging of his presence in the room. - Socyberty (White House Insider: Obama Hesitated – Panetta Issued Order to Kill Osama Bin Laden)

Go read the entire article which notes how much of an obstacle Valerie Jarrett was on behalf of the President and how those interested in actually fighting a war on terrorism managed to work around the President. Providing that there is any truth to this story.


Interestingly enough, the recent Times article on the raid, provides a copy of the mission order Leon Panetta issued (At least his note of it). This part of the official story just happens to fit into the storyline above.

Given that the President's campaign is all interested in discussing the raid on Bin Laden, perhaps they would like to explain why the President is sitting in the corner during one of the most important meetings of his Presidency. Perhaps, this was to give him easy access for the door in case the raid did not end so well. I wonder, are there any photos of this meeting where the President is not seated in the room...

I suspect that we will be returning to this photo before November's Election.