Note for Democrats: Spending Less is Not Extreme - Demanding More is...

It has been clear for a while that the Democrats are not interested at all in trying to win over Tea Party activists or people like myself who agree with the Tea Party goals of cutting spending and limiting Government.

Now it seems that the Democrats are taking a position of open hostility against Tea Party attempts to make out Government Representatives more responsible:

"The main thrust is basically that we want to negotiate and we want to come up with a compromise but the Tea Party is pulling Boehner too far over to the right and so far over that there is no more fruitful negotiations," Schumer said on the call. "The only way we can avoid a shutdown is for Boehner to come up with a reasonable compromise and not just listen to what the Tea Party wants. "

Schumer described Boehner as "in a box," over the budget negotiations.

Some of our politicians simply have no shame at all. Unfortunately, this is a problem on both the left and the right. However, no amount of spin or even flat out slander of a segment of the voting population is going to change a very simple fact that the Government is recklessly borrowing huge amounts of money that they have no intention of ever paying back. And I think with this in mind, they have no problem trying to spend even more huge amounts of money, simply to buy votes. Keep in mind that the deficit for the current year is about $1.5 trillion out of a $3.5 Trillion budget. Republicans were attempting to cut budget spending by less than 2%. This is defined as extreme by Democrats. It might shock Senator Shumer, but many American families have been forced to such 'extreme' measures with their own budgets.
If Shumer wants extreme, I suggest the Republican members of Congress give it to him and the Democrat leadership. The easiest way to do this is by refusing to increase the debt limit.

Refusing to increase the debt limit will force the Government to operate under a balanced budget. Given how Democrats can't even cut frivolous and wasteful Government spending, this is probably the one way to stop this insanity. Is this an extreme way to go? the budget would have to be cut over 30% (Or cuts plus increase Government revenue). The more I listen to Congress bickering on CSPAN, the more I'm starting to think that this is the only way to go. It would be more tough love than extreme. It would surely be painted as the 'Nuclear Option', but hey, we live in a nuclear world.

At the very least, this should be the opening position for the Republicans in the House. Even if they eventually have to meet the Democrats 'half way', that will still be lots better than where we are being driven right now.

One thing that has become quickly clear to me while listening to all the talk inCongress of the Continuing Resolutions to fund the Government and just what to cut in terms of spending, that is it going to be impossible to 'apply a scalpel' to the US Budget and carefully cut spending. there are two problems with such a method. First, most every dollar of spending has some Congressman ready to stand up and speak against cutting it. And second, the sheer amount of overspending, around 40% of all spending is borrowed, there is no way that we will be able to get Congress to selectively cut a tiny fraction of that amount.
Ace of Spades has been covering the budget/debt problem for a while:

With just this year's spending, President Obama, Henry Reid, and Nancy Pelosi have saddled us with debt that we will probably never pay back, and the White House budget (even before the CBO corrections) agrees. It doesn't even try to pay back these deficits - in fact it doesn't even balance the budget. Ever. - Ace of Spades

I think it is time to axe the budget by starting with a new budget where each kind of spending needs to be justified with total spending limited by the amount of expected revenues.
Does this mean that I want to cut Head Start? Damn right it does. I already pay for two children of my own. It is a responsibility of parents. Shame on the Government for deciding that I should also contribute to support children of other parents.
The budget Axe. It's the new scalpel. It needs to be.
--------------------

Homeland Security announced yesterday that it is now possible for people to e-Verify themselves. the idea being that you can check to make sure that your e-Verify information is correct.

On Monday, the U.S. Department of Homeland Security launched E-Verify Self Check, which also is available in Colorado, Idaho, Mississippi, Virginia and the District of Columbia. It will be extended to all states by the end of the year.
"E-Verify is a smart, simple and effective tool that allows us to work with employers to help them maintain a legal workforce," Department of Homeland Security Secretary Janet Napolitano said in a news release. "The E-Verify Self Check service will help protect workers and streamline the E-Verify process for businesses."
The initiative complements E-Verify by limiting bureaucratic hiccups and giving job applicants the opportunity to correct errors in Homeland Security and Social Security Administration databases that the system uses. - Tucson Sentinel

The E-Verify Self Check website is here Link (Not sure why they would use an impossibly long url) and it unsurprisingly confirmed that my information is correct and that I am authorized to work in the US.

So we have one less reason to not have all employers in the US use E-Verify to confirm that people applying for jobs are authorized to work in the US.

Now we just have to get the Government to start deporting illegal aliens are they trip over them. 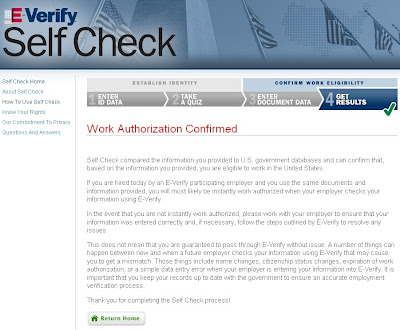 This week the Democrats displayed near unlimited concern that a group of Americans might be unfairly labeled for the actions of a few bad actors within that group:

Republicans criticized their counterparts for cloaking the debate in political correctness by questioning the constitutionality of targeting a specific group. Several Democrats suggested a broader hearing that would look at extremism of all kinds.
“I cannot help but wonder how propaganda about this hearing focusing on the American Muslim community will be used by those who seek to find a new generation of suicide bombers,” said Rep. Bennie Thompson (D-Miss.), the panel’s ranking member.
But Rep. Paul Broun said such arguments miss the point: that al-Qaida and other organizations are successfully radicalizing youth in Muslim American communities.

Personally I think the hearings are needed. After all, all things being equal, which community is most likely to breed terrorists inside the US?
Too bad that the Democrats, who are so quick to come to the defense of one community are as quick to label and slander other groups such as pro-life supporters, gun owners, tea party supporters, anti-illegal immigration advocates, conservatives, Republicans and anyone who does not keep in step with their own radical agenda.

Also, too bad that the Democrats are so complicit with refusing to acknowledge actual cases of violence committed by those they defend while accusing persons on the right of fostering violence that never manifests itself.
--------------------