So on the way home Tuesday evening I caught a couple minutes of Congress debating how to, and how not to cut Government spending. Lucky me caught Boston Congressman Stephen Lynch's attempt to redefine Republican efforts to cut spending while at the same time not raise taxes against the rich as 'Reverse Robin Hood'. You can catch his comments here (Clicking the image will take you to the CSPAN site where his comments start a couple seconds into the video): 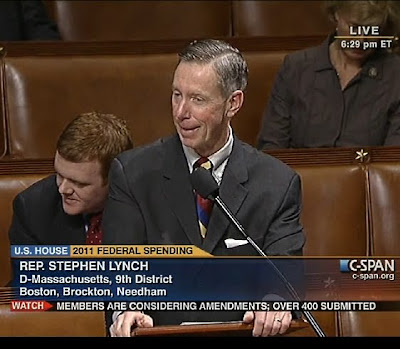 Video Link
I have a couple major issues with his line of thinking.

FIRST, in the case of 'Robin Hood', he was stealing from the rich to give back money that was taken by the Government from the poor. In our present society, the bottom half of income earners currently pay no taxes. In effect the Government is asking/taking nothing from them in the form of contribution as part of a collective payment towards the costs of our society. So what Congressman Lynch is defining as taking from the poor, is in actuality proposals to give less to the poor. There is a huge difference.
Second, he attempts to portray Republicans as evil because he claims that Government giving to the poor could somehow continue if only the Republicans would be big enough to raise taxes on the rich or in his words to ask millionaires 'to give a little more'. This is ridiculous for a number of reasons:
Congressman Lynch asks what about the single mother's and those in need? They are good questions, but there are other good questions that he and his Democrat buddies never bother to ask, such as
As for the single mothers, how about demanding their respective single fathers pitch in? After all, if it is expected that I and other wage earners are expected to substantially support a good percentage of the population, then perhaps we should have a say on how these people are living their lives?

Before you declare this an unreasonable demand, look at how often aid money is wasted and abused. Remember the news of how Katrina aid given to evacuees was used in all sorts of wasteful ways, and now the Drudge Report is highlighting a Colorado Bill that would Ban the use of welfare cards at Strip Club ATMs. California has also be fighting abuse of their welfare funds. When is this all going to stop? The rest of us have to adjust to the current reality, so should the poor.

As for the elderly, I do have sympathies, but now I am starting to wonder about their innocence in all of this. They are the ones who elected the politicians who promised them the social welfare whose cost is now threatening to crush the system. They are the ones who permitted the Government to run deficits year after year for most of their lives. Social Security and Medicare entitlements are going to have to be adjusted. It is just a simple reality and given how people are living much longer, it is a fair adjustment to raise the retirement age, for starters.
Third, given that EVEN IF the Government raised taxes substantially, the budget will still spend more than it takes in in revenue, benefits are going to be cut. So Just who is robbing from who?

Decades of deficits have resulted in a mountain of debt. If Anything, the group that is being robbed is not the poor, but the children of this country. So as Representative Lynch would like to call out that Tea Party supporters are throwing the elderly into the harbor, what he is calling for is for all of us to saddle my generation and my children's generation with their irresponsible spending including their cleaning out of the Social Security Trust fund.

Now you would think that the poor would be concerned about their children having to pay for the support that they are receiving. However, given that they were never asked to pay for the benefits their parents received, why should they consider anything other than the possibility of the Government cutting back the benefits (and in many cases free lunches) that they are receiving.
Another Point. The Federal Government is not the only Government around. States are also responsible for providing public services, such as fire, police and education. If the people of a state want more, they they should be asked to pay more. This is not happening, partly because the Federal government has been footing the bill. For example, why is the Federal Government sending aid to Alaska while at the same time the State collects no income tax? Who considers this fair.

There is much more to this issue. Again last night I heard another Congressman use the Reverse Robin Hood comment. And I suspect that she will not be the last.

News comes out this morning that the Japanese have suspended their whale hunt operations, for now:

AFTER decades of bitterly opposed Antarctic ''research whaling'', Japan has suspended its hunt and is near to formally pulling out only halfway through the season.

Following a sustained pursuit by activists from the anti-whaling group Sea Shepherd, the whalers have had their kills slashed at a time when financial demands are tightening in Tokyo and diplomatic pressure is rising.

The sudden shift has raised hopes that Japan may be moving to end its 23-year program, which has killed about 10,000 Antarctic whales. - The Sydney Morning Herald

I have to say that I am somewhat surprised that the Sea Shepherd activists managed to stop the Japanese from whaling. Simply put, they managed this because they were more willing to endanger their lives than the Japanese were willing to fight back, despite managing to ram and sink a Sea Shepherd vessel last year. I do not think the Japanese were beyond sinking another ship this year, if the right accident opportunity presented itself, like in the photo below. 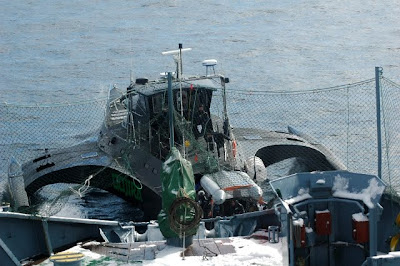 "The Gojira abnormally coming close in front of the Yushin Maru No. 3 bow." - Link
I guess we will just have to see what the Japanese plan next. I would not be surprised if they wait for Sea Shepherd to leave the area and then turn around, or just relocate to some other area. After all, this is a huge loss of face for them, not that killing whales is any better in that respect, but now there is an added level of shame, especially for the sailors who lost to a bunch of mostly disorganized, reckless and poorly trained opponents. Really, it is amazing that none of the Sea Shepherd group has managed to kill themselves all this time. I wonder how they would stack up against pirates...

The BELUGA NOMINATION was recently taken by pirates. One open question was how the pirates managed to get into the ship’s Citadel safe room where the crew was hiding. As it turns out, the safe room was not so safe.

Somali pirates captured Beluga Nomination in the Indian Ocean on January 22. The crew hid in a citadel on board the ship for the first 48 hours, according to Beluga. But then pirates were able to open the ceiling of the safe room and took the crew hostage. – Lloyds List

This sounds like a scene right out of the movie Aliens where the Marines were trying to figure out how the aliens got through the barricades intended to keep them out of the living spaces only to realize too late that they were climbing through the ceiling.

This article also points out that the crew was safe from the pirates for a full 48 hours before the space was breached. So where were the naval forces during that time? An attempt was made to re-take the ship but it was not until after the pirates had gained access to the crew.

The article does not note where in the vessel the safe room was located, but if they managed to enter it from the ceiling, I suspect that it was inside the house. This clearly now was a poor decision. Also, if you watch the video of the South Korean raid on a captured cargo ship last month, you can see that the house was peppered with bullet holes. That is another reason not to place the safe room in the house.

So take the information above and treat it as lessons learned. How safe and secure is your Citadel space?