"DREAM ACT" - Innocent Children? What about their Guilty Parents?

So out of all of the possible things Congress could do to start digging this country out of the mess it is in, the Democrats have decided to work on passing a mass amnesty bill for illegal aliens.

7:19pm ET: If you stepped away from CSPAN just now you missed a quick, stirring, strong speech from Texas Rep. Sheila Jackson Lee in support of the DREAM Act. She said:

These children have not broken they law. These are are not criminals. [Note: Bullshit] The only nightmare I can imagine is the nightmare of violating the rights of these individuals who want an opportunity to serve America. First of all they have to be in the country for five years already. And they cannot change their status for another ten years…Do we violate our rights and our beliefs about we all are created equal?

And so I ask my colleagues to support a DREAM Act that invests in America, that allows people to serve America. It is not amnesty. It is people wanting to serve this country, pledge allegiance to the flag of the United States of America. Stand for what is right. Vote for the DREAM Act. Believe in our values. We are all created equal.

This is a scam, plain and simple. If this was about simply what the Democrats claim it to be, than the bill would would not have been written with some many crappy provisions in it, including the provisions that allow even criminal aliens to become legal under this proposed act, which is why I call BS Congresswoman Lee's comments above.

Also, keep in mind that by calling the children innocent, there is a guilty party the Democrats are ignoring, the parents of these illegal alien parents. The bill does nothing to punish the guilty party. Hell, the Democrats want to legalize them too. Hell, I might be party open to given these so-called victimless children a shot at legal status provided that their guilty parents are deported. After all, it is these parents that put both their children and us as a country in this position. Me, I say send them home. If their home countries are so bad than this is exactly what they need to reform, US-educated young adults to foster reform and improve living conditions back in their parents home. I do not see how we as a country need to be responsible for the bad behavior of others.

This position might seem heartless, however where do we draw the line? There are millions outside the country in need. how about the US instill it's laws and values on those third world countries? See, now I am evil for supporting an imperialistic America. however, look at the bright side if the US took over these countries:
The illegals will become legal residents
Again this bill is a scam. The 'Dream Act' is nothing more that the 'Anchor Baby Creation Act of 2010'.
--------------------

It seems that Liberals are all up in arms about the President agreeing not to raise taxes on all Americans. This goes against the Liberal/Democrat demands that taxes be raised for the richest Americans.
First, one argument that Liberal Democrats were making, and something that Congressman Pelosi was using as an argument to raise taxes, was that all Americans were still going to get a tax cut, up to a certain point. In other works that the richest paid the same taxes as those earning less than them for that same portion of earnings, i.e. under $250,000 for couples. This however is disingenuous and the Democrat's first lie, because not all of the tax breaks are extended to Americans that exceed a certain income level. One of those tax breaks that cuts out is the child tax credit.

If you have children who are under age 17 at of the end of 2009, you can get a $1,000 tax credit per child on your tax return. A tax credit reduces your tax bill dollar-for-dollar, so three qualifying children, for example, can cut what you owe Uncle Sam by $3,000. The credit may be limited if your income exceeds the levels listed below.

And the credit does not affect the exemptions you take for dependents—worth $3,650 each in 2009. The child tax credit is in addition to those exemptions.

Credit is phased out at higher income levels

The argument for higher taxes for the rich made by Liberals also ignores a simple fact that the tax system is progressive and those that earn more pay a higher percentage of tax on their higher earnings with or without keeping the current tax rates. Click on the images below that cover both the current rates (10%, 15%, 25%, 28%, 33% and 35%) and the previous rates (10%, 15%, 27%, 30%, 35% and 38%) and in each case, the rich always pay a higher percentage in tax on their higher earnings. (Tables found here)

Liberals are also complaining that the announced tax deal by the President is unfair in that it extends the tax break for two years but only extends unemployment for 13 months is another weak argument. Simply put, unemployment payment is supposed to be temporary aid in order to help people find replacement work. It is crazy to extend such payments for years. This has the ability to distort behavior against taking other work, especially if the new work does not pay as well as the old job did. Unemployed were never entitled to unlimited unemployment benefits. To offer up another year is doing little more than creating a class of permanently unemployable 'workers'. This needs to stop.

The argument made by Liberals is distorting the actual cost of extending the current tax rates. they are using the cost to extend the current tax rates for the next ten years. Comparatively speaking, this amount is much smaller than any one year deficit during the Obama Administration. It is also about the same cost as the failure known as the 'Stimulus Bill'. As I wrote before:

As for the number that the President is commenting on there above, while being large, they pall in comparison to the actual deficit total. As for the $700 billion cost the President mentions, that is the cost to extend the tax cuts for the rich for the next ten years. In comparison, 'The total deficit for fiscal year 2009 was $1.42 trillion'. - Link

The argument made by the Liberals also ignores that the richest Americans already pay the majority of taxes. the lower half pay next to nothing. Take a look at the mint.com graphic below. The bottom half of the population is paying no Federal income taxes. How is that fair? Everyone should contribute. Many do not and this is distorting rational decision making as they are only looking at the Federal Government in terms of handouts. So it then becomes in their best interest to ensure that the richest are taxed as much as possible. It also perverts the perpetration of fraud among benefit recipients who, instead of reporting fraud, instead also look to benefit by replicating the crime, since it does not cost them anything. 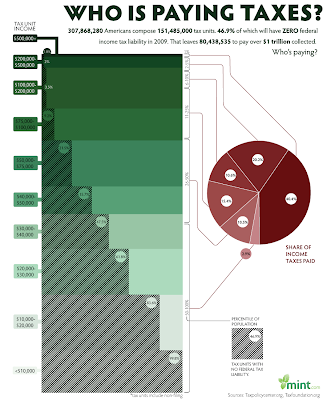 The Democrats in Congress are talking about extending the Tax Cut for the middle class, because the poor don't pay anything. They are also ignoring the real problem which is spending. The Government is addicted to spending. As with any addition, the cure is never more, in this case money, but less. (and do not forget the other problem which is simple waste...)

UPDATE:
OK, I got the additional unemployment time wrong:

Just wanted to point out that the unemployment benefits extension doesn't give the 99ers another 13 months. The 99ers are still done after 99 weeks. This new bill just covers those behind the 99ers who are about to lose benefits.

I won't denigrate these people. I will say that people who can't find work for two years should perhaps move to where the opportunities are. - Lou Minatti

The Maritime Executive has news regarding investigation findings on the Sinking of the Sea Shepherd's ADY GIL:

Both Captains to Blame for Collision Between Activists and Whalers

The January collision between a Japanese whaling ship and a protest boat has now been officially blamed on both sides.

Maritime New Zealand says there is no evidence that either side intentionally caused the collision. The organization has placed blame on both captains saying they both failed in acting properly to avoid the accident. - The Maritime Executive