Don't you hate it when the bad guy gets away? Me too, which is why I love stories like this.

Scott A. Masters, 41, is accused of shoplifting the pastry [Note: a 52 cent doughnut] and pushing a store worker who tried to stop him. The worker was unhurt. But with that shove, his shoplifting turned into a strong-arm robbery. Masters, who appeared in court Friday, is stunned. The prosecutor shows no signs of backing down. In fact, because Masters has a prior record, he could get a sentence of 30 years to life. - STLToday

Of course, Mr. Masters has an extensive record:

Masters, who lives in the nearby town of Park Hills, has been arrested more than a dozen times: for being drunk, for shoplifting, for missed court dates, for marijuana possession. He spent most of the 1990s and a stretch from 2000 to 2004 in state prison for the felonies of torching a car to collect insurance and possessing methamphetamine ingredients. - STLToday

People like this are a menace. This is only what he has been caught doing. Although we can't judge him on suspecting that he is more of a criminal than his arrest record indicates. But really, why must we have to deal with this man over a dozen times. Maybe he has moved from the more serious crimes to petty ones because he knows that he can get away with them. He is certainly shocked that he might be going away to prison for years:

"Strong-arm robbery? Over a doughnut? That's impossible," Masters said, exasperated. "I've never had a violent crime in my life. And there's no way I would've pushed a woman over a doughnut."
After his arrest, he forgot all about the case. He assumed it had been dismissed. He spent the summer in jail on outstanding warrants. Just before he was to get out, he was indicted Sept. 14 in the doughnut case. His bail was set at $25,000 — well beyond his means.
Masters briefly appeared in court Friday. His case was continued until next month. He is shaken by the possibility of a third felony conviction. A prosecutor could pursue an enhanced sentence. As a persistent offender, Masters could face a murderer's term.
"I can't believe this crap," Masters said. - STLToday

See. Even with prior convictions, he still expected the system to go easy on him, simply because he was caught being a petty criminal, this time. This guy should be defined as a persistent offender. The rest of us should not have to put up with him being loose on the streets. There should be a limit on how many times you can break society's trust. Unfortunately, there is no way to limit how many times you can be a victim. That is where three strikes laws come into play to reduce your chances of being a victim of a career criminal. Here is a graph of ten years of three strikes sentences in California. 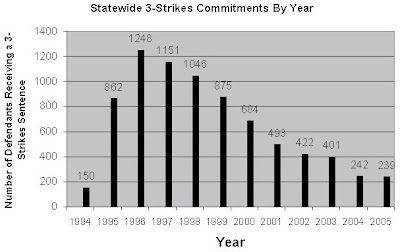 While there is a large number of criminals sentenced under the law at first, which appears to get the message out to others, which results in less serious criminals. The end result is a dramatic reduction in crime.
This can work. You just have to stop feeling sorry for those who are sent to jail. Sure it is hard on their families. He/she should have thought about that beforehand. Then again, where were their families back them to steer them away from trouble?
Link:
52 cent doughnut may cost man 30 years to life - STLToday.com