How not to ask for a reference for your new job 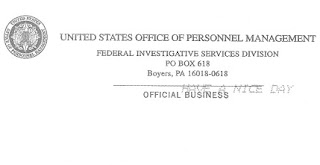 I have been pretty lucky in that staff turnover in my department has been limited to those leaving to either further their education or to take advantage of new diplomas in that they are not able to with the company we work for. Lucky being that it is a real pain to find new qualified employees.
I most recently had one employee give me notice a couple weeks ago at the end of the workday Friday afternoon. She was so quick dropping the resignation letter on my desk while I was on the phone that I was not able to talk to her until Monday morning. Wednesday would be her last day. She had one request in that her coworkers in the department not know that she was leaving until after she was gone. After discussing it, she agreed that it was acceptable to inform her coworkers on Wednesday afternoon before she left out of respect for them. I have no idea why she just wanted to sneak away other than her stating that she did not want to make a big fuss out of it.
I was somewhat surprised when she went to lunch that Tuesday and did not return. She had left her key on her desk. Nobody knew that she was planning to quit and she gave no indication that she would leave prior to the end of the day Wednesday. Strange thing, she was a very good employee, right up until the point she failed to return from lunch. No exit interview. I did not even get the opportunity to discuss the open issues that she would be leaving behind. (She did have the pending files arranged on her desk.)
No matter. Virginia has a right to work law where an employer can fire you without cause and without prior warning. Employees also have the right to quit without prior notice, although the standard custom is to give two weeks notice. I did not get two weeks notice from her, but I did get a notice. I have no idea why she would not live up to it, especially since she picked the ending date herself. She walked out on us and did not look back. So be it. I wish her the best of luck.
However, by leaving as she did, she burnt at least five bridges she could have depended on in the future if it ever turned out that she needed help. That's too bad for her since her new employer, the US Government, needs evaluations from both the company and from me, her former manager.
I would have loved to have supported her in her new job which I understand included training to become a nurse. However, that was before she just walked out as she did. I do wish her the best, but I am not going to waste my time helping her. She must have known that I would receive this evaluation request. She did provide my contact details. Did she expect that I would just fill it out? That was a foolish mistake, especially considering that failing to get this back will cause problems. (I have filled one of these before and the person I did it for told me that it took five months before he was cleared for work and he had no problems getting these returned.)
After her disappearing act, I wondered what kind of problem might I be burdening someone, possibly even a patient, by assisting her get this position. This also reminded me of some valid issues that should be included on the form if I am ever convinced to fill it out in the future.

The first time I read this, I thought you submarined her. Now I realize you just didn't say anything. I think this second response is so much better. I agree in not supporting her or going out of your way to comment either way. She's young (at least in terms of maturity). Hopefully, she'll think about this in the future and perhaps learn something.

I quit one of my early jobs. Looking back, I don't think I handled it well; my resignation was in my desk, already signed, just waiting for a date stamp. My boss gave me some mickey-mouse task or request or something, and I pulled the desk drawer out and with a flourish, I removed the letter, stamped it, and flicked it in his direction all with a fluid motion. I had not practiced the move, but one could have thought that I had. Anyway, I would never do it again; I'm smarter; I've learned: don't ever burn bridges... unless you really can't stand the person. And, in truth there are only two, or maybe three people, that I'd never want to work with again. That's out of every job, every posting with the Coast Guard, every volunteer thing I've ever done.

Anyway, hopefully, she'll learn. And in the mean time, the federal form can turn yellow with age resting comfortably in the desk drawer.