I am currently in Finland and you can read about some of my adventures by going to my homepage and scrolling through some of my recent posts. I will be posting more on Tuesday or Wednesday.

This Weeks Photos:
This weeks photos are from the website of highly creative, progressive-thinking Finnish-Flag shipping company Langh Ship:

Langh Ship is a shipping company whose operations are based on service. We believe that thorough knowledge of the customer’s transport needs and innovative solutions of the highest possible quality create added value in transport services – something that our customers appreciate.

The transport methods we have developed and our first-class vessels, coupled with our expert staff guarantee the reliability of our operations, from the point of view of our customers, safety and our environment. - Langh Ship

Now don't be fooled, they are more than just containers: 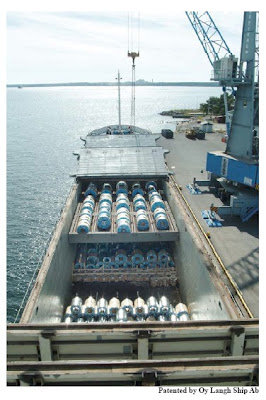 This Weeks Items:
Eagle Speak has "Pirate Attacks Up Worldwide". He also has "Canadian-Russian "Arctic Bridge" - cargo flows to and from the "Polar Bear Capital of the World""

The Monitor wonders why it took Transport Canada over a year to express concern that crewmembers of the QUEEN OF THE NORTH ferry regularly smoked marijuana both at sea and ashore.

For those looking for just a short summary, the Wall Street Journal article "U.S. Shifts Maritime Strategy" is for you.

In the first major revision of U.S. naval strategy in two decades, maritime officials said Wednesday they plan to focus more on humanitarian missions and improving international cooperation as a way to prevent conflicts.

"We believe that preventing wars is as important as winning wars," said the new strategy announced by the Navy, Marine Corps and Coast Guard. - WSJ

I'll go and read the report when I get back from vacation, and I truly hope that it takes into account that any serious conflict we might find ourselves in, will most likely have to be fought with only half our forces, the other half being wiped out by an enemy who completely blindsides us a-la-Pearl Harbor. The comment above is hardly reassuring. Prevent them all you want, but be sure that you can fight one started by the other guy whose strategy takes advantage of yours.

Tims Times brings us the problems of smoking when you are a 'Dunkirk Sea Pilot'. (Some people will smoke anywhere. I sailed on a tanker carrying gasoline for three months and there was no shortage of smokers there either. I took comfort in the fact that the tanker was 30+ years old!)

Tims Times also has more as heard on the VHF, this time taking aim at the French.

Hengineer gets out of the shipyard, only to be visited by people from the home office and the Coast Guard. What joy!

New research suggests that the impact of shipping on climate change has been seriously underestimated and that the industry is currently churning out greenhouse gases at nearly twice the rate of aviation. - The Independent

Maritime Accident Casebook has this great short read "Watch where you bolt your furniture!"

gCaptain covers yet another 'magic pipe' conviction. The vessel in this case is the US-Flag car carrier M/V TANABATA.

Molten Eagle issues a challenge of three questions. One has been answered, but two remain, including "Post Cold War, Molten Eagle has yet to hear of a single sub skipper who did not graduate from the USNA. We all know that there may be exceptions to a general rule. Name at least one (assignment #3)." He also questions if the Naval Academy and other Academies are being stuffed with the wrong type of candidates.

INQUIRER.net (Philippines) has the story "Maritime cops probed for extortion of tuna operators"

Cardiff News (UK) has the ongoing detention (3 months and counting) of the St Vincent and the Grenadines Flag cargo ship AP CROWN for multiple safety deficiencies.

Deputy Dog has "hardcore boat-lifts" which I found via Never Sea Land.

SAILORS, MARINERS & WARRIORS LEAGUE has the shooting of a sailor on the USS BAINBRIDGE and his subsequent helo evac.

Tugster returns to the steamer LILAC and posts more photos.

Kiwi at Sea encounters a Philippine sailor who can think of nothing other than sex. And no, most sailors are not like this one. After all, just where would they get the time.......

Finally, did you know that there is still French Territory in North America? Check out the Wikipedia entry on "Saint Pierre and Miquelon", "the only remnant of the former colonial territory of New France that remains under French control."

The islands are part of France and the European Union but due to special immigration procedures, EU nationals who are not French citizens are not allowed to exercise free movement and business establishment in the archipelago. - Wikipedia 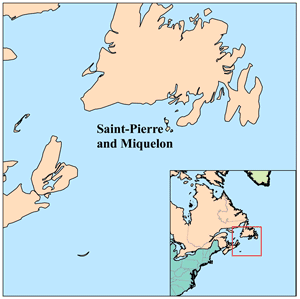 House hearing on mariner education and work force - The Subcommittee on Coast Guard and Maritime Transportation of the House Committee on Transportation and Infrastructure conducted an oversight hearing on Mariner Education and Work Force. As explained in the Summary of Subject Matter, the focus of the hearing was growing shortage of mariners and the challenges facing the maritime work force. Subcommittee Chair Elijah Cummings (D-MD) expressed concern that the maritime industry is no longer attractive for new entrants. Committee Chair James Oberstar (D-MN) discussed the importance of timely and relevant training. Rear Admiral Joel Whitehead, USCG, explained the role of the International Convention on Standards of Training, Certification, and Watchkeeping for Seafarers (STCW Convention) and the Coast Guard’s involvement in maritime employment. Mr. Sean Connaughton, Maritime Administrator, discussed programs of the Maritime Administration (MARAD) intended to increase the size and professionalism of the US maritime workforce. Mr. Michael Rodriguez, International Organization of Masters, Mates & Pilots, complained of the increasing criminalization of mariners, the stringent medical policy adopted by the Coast Guard, and the growing problem with crewmember fatigue on ships. Mr. Carl Annessa, Hornbeck Offshore Services, explained that the way in which some training requirements are enforced makes it very difficult for unlicensed personnel to transition into licensed positions. Ms. Cathy Hammond, Inland Marine Service, explained that the Coast Guard should not conduct routine safety boardings in the same manner as it conducts “for cause” law enforcement boardings. VADM John Craine, USN (ret), State University of New York Maritime College, discussed the role of state maritime academies in training merchant marine officers. Captain William Beacom, US Merchant Marine, expressed his view that the Coast Guard was more concerned with protecting shipping companies than it was with protecting merchant mariners. Mr. Augustin Tellez, Seafarers International Union, discussed the importance of the Maritime Security Fleet Program, the Jones Act, the Ready Reserve Force, and cargo preference. Captain Arthur Sulzer, USN (ret), discussed the role of maritime secondary education institutions in preparing young people for careers at sea. Captain Jeff Slesinger, Western Towboat Company, discussed the innovative Pacific Marine Towing Industry Partners, a cooperative training venture to attract, train, and retain skilled maritime workers. Ms. Berit Eriksson, Pacific Coast Maritime Forum, proposed that Congress enact a program of loans to individuals to fund maritime training, with the loans to be forgiven if the individual completes 36 months of sea time. (10/17/07). - Dennis Bryant Holland & Knight homepage (Used with Permission)

EU proposes integrated policy - BRUSSELS 18 October – The European Commission today presented new proposals to make freight transport in the EU more efficient and sustainable. A new package of measures, proposed by Jacques Barrot, Commissioner for Transport, consists of an action plan concerning logistics, a proposal giving rail network priority to freight, a communication on European ports, as well as two documents on the barrier-free European maritime transport area and the so-called “motorways of the sea”. “The simultaneous adoption of all these measures gives a strong signal demonstrating the close links between logistics and the various modes of transport,” Barrot said. He said the common objective of these initiatives is to promote innovative infrastructure technologies and practices, develop means of transport, improve freight management, facilitate the construction of freight transport chains, simplify the administrative procedures and enhance quality throughout the logistic chain. The Commission is promoting maritime transport, which remains the mode that is the most environment-friendly and energy-efficient, Barrot said. The simplification of administrative procedures for maritime transport within the EU is essential to make this mode of transport more attractive. The documents on the European maritime transport area and the motorways of the sea demonstrate the progress made with the preparation of these two initiatives and invite all stakeholders to give their opinions. The communication on European ports policy is aimed at facilitating the development of an efficient port system in Europe that will be capable of meeting current and future transport needs. It sets out an action plan for the Commission to help European ports address challenges such as the increase in transport demand, technological changes and the need to reduce emissions. - Fairplay Homepage (Used with Permission)

Previous Editions:
Here or click on the label below 'MaritimeMonday'.
.
Posted by Fred Fry at Monday, October 22, 2007