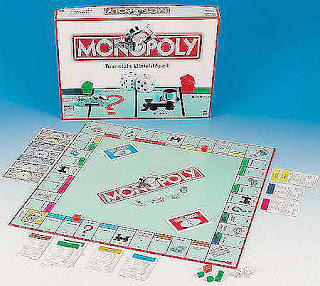 There is all this talk about how the dollar has somehow lost buying power as its value has eroded against the Euro. Well, at least in Finland, this is not an issue, partly because items were unbelievably expensive even when a dollar was exchangeable for a Euro.

Take the classic American game of Monopoly. The game can be found in the US for under ten dollars. ($9.74 at both Target and Walmart.) The game is available for $10.75 on Amazon, but that does not include a $3 rebate if you buy the game before 7 January. ($7.75 + one stamp to mail in the rebate form.)

So how much would you expect to pay for Monopoly in Finland? At the current exchange rate, it will cost you $49. (34.90 Euros (on sale!) times the exchange rate of 1.417 dollars to the Euro.) Now I would expect that the Finnish-language version of the game would cost a little more, but not fives times as much. Really, this game was probably translated decades ago. Any additional cost is probably limited to actually getting the games to Finland. Even if the dollar was worth a Euro, it would still be grossly overpriced at three times the US Price. Finland's tax rate of 22% does not explain away this price difference either.

To make matters worse, salaries in Finland are generally less than they are in the US and income taxes are higher. 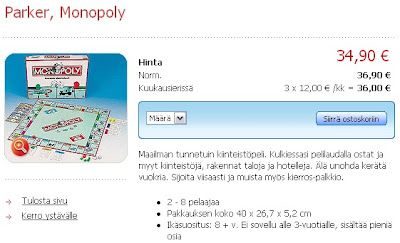 This store will let you pay in three monthly installments, for 1.10 Euros extra. I first noticed this in a store that was selling the game for 39 Euros and was sure it was a mistake, but no.

So don't let anyone kid you in thinking that you can buy less for the dollar. Your buying power in the US is on a wholly different playing field than in Northern Europe.
Posted by Fred Fry at Wednesday, October 17, 2007