This Weeks Photos:
These photos are taken from the accident report of the 1994 grounding of the M/S SALLY ALBATROSS. 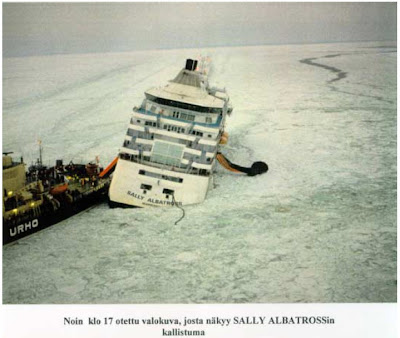 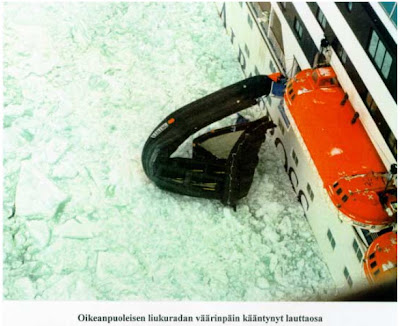 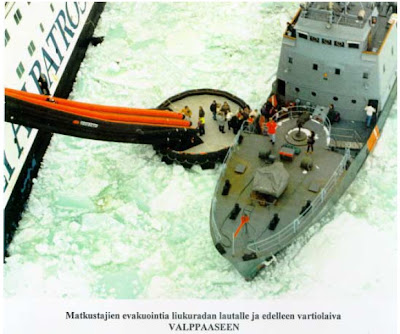 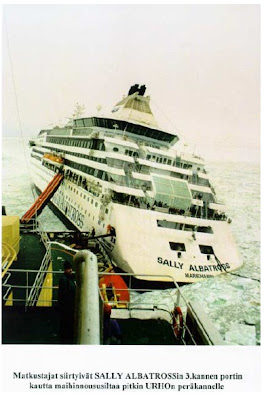 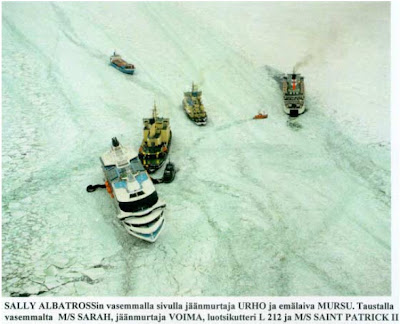 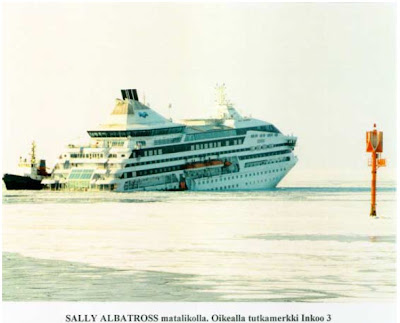 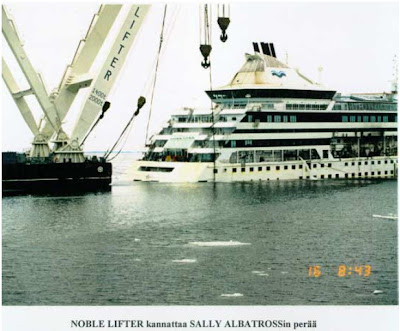 The report is in Finnish, but the photos don't need any explanation. The PDF format report can be downloaded from this page. The Finnish Accident Investigation Board does publish accident reports in English, just not this one. They (including the highly flawed report on the M/V ESTONIA) can be found here.

Live Leak has dramatic video of a collision by the (now ex) SALLY ALBATROSS / SILJA OPERA that appears to destroy all the boats on the port side.

It incorrectly notes that this accident happened in Finland, but Cruise Junkie has the following two accidents events listed for this vessel in 2003:

The Silja Opera, a cruise ship sailing under a Swedish flag, collided with a Yermak icebreaker stationed at the exit of a St. Petersburg port on Wednesday. The Silja Opera's lifeboats were damaged but the ship remained capable of traveling.

Collided with several ships and a crane at St. Petersberg. Damage not sufficient to delay itinerary. - Cruise Junkie

I am not sure which of the incidents above is the one that was recorded. (I would think it was the one noting the damaged lifeboats, but it appears that the vessel struck was a cargo ship and not an icebreaker.) I wonder how much damage a lifeboat needs to be sustained to have a press release note that they were destroyed as is clear in the video. Wikipedia has this comment on the vessel:

The ship already had a reputation as a ship of bad luck amongst the public (she had after all burnt out completely once and partially sunk only a few years later, in addition to smaller mishaps), and this was not helped when in September 2003 she collided with three cargo-ships in St. Petersburg, resulting in minor damage to all parties. - Wikipedia

This vessel is currently named the M/S CRYSTAL as is currently sailing as the replacement vessel for the SEA DIAMOND that sank in Santorini earlier this year.

Cargo Law has the collision between the drilling platform USUMACINTA and the KAB 101 Light-Production Rig, resulting in 21 dead.

Tims Times cleans tanks and then has to deal with idiotic (and reckless) inspectors.

Lifeboats are not the only killer on a ship. Maritime Accident Casebook covers another life ender, the (anchor) Chain Locker, listing some recent accidents.

gCaptain comments on "Are Rising Salaries Enough To Retain Mariners?". Well, rising salaries are a good spot. Just a little too late for me. (Oddly enough, I was asked a week ago about the possibility of getting my license back. If so, there was a job waiting for me. One small problem, the working language on the ship was Swedish, but I was assured that this was only a 'small problem'.)

The Pilot Boat covers the voyage data recorder. How would you like one of these hooked up to your workplace.

Sea * Fever has the effort to save the historic riverboat DELTA QUEEN which will be retired unless the Democrat-Controlled Congress acts to save her. Not likely.

The Sunday Herald has the threat of pirates off Iraq. (How about making piracy a death penalty offense?)

The Stupid Shall Be Punished has the completion of the nine month deployment of the UK's sub HMS SCEPTRE.

Cruise Bruise seems to make the cruise lines out as villains when it comes to extending services to infants, but I think anyone who brings an infant onto a cruise is being somewhat irresponsible. After all, ships are inherently dangerous, including cruise ships. Sure, the cruise lines could set a minimum age for passengers, but at the end of the day, you are responsible for your child.

The Horse's Mouth has a must-see fishing photo.

CDR Salamander has two cases of shameless Congressional pork projects doing their bit to handicap the Navy and Marine Corps. With friends like this...

Telegraph (UK) has good news for some looters/salvagers in that any BMW cargo they hauled off the beach is theirs to keep, provided they declared it in accordance with the law. (Further update on the vessel below.)

Kiwi at Sea thinks that the Russians are a bit ungrateful that they are there helping them, and provides examples. (I know of one guy who tried to leave by train. The conductor collected his ticket and moved on. Then when returning stopped and asked for his ticket again. He politely explained that he already gave them the ticket and that the conductor could confirm that by flipping through the tickets in his hand. Well that never happened. Instead, he endured a good deal of verbal abuse before they lost interest in harassing him.)

Tugster has "Hulls as Flags"

THE PRIVATE ISLANDS BLOG has "Tiny Island Nation of Tokelau & The Internet". Be sure to click through to the story to read just how the internet has changed life on the island.

The Reporter.com has an opinion piece that mothball ships slated for scrapping should be scrapped in California, keeping the jobs in California instead of 'exporting' them to Texas.

Daily Yomiuri Online notes that despite sanctions, exports to North Korea are surging due to simple circumvention of the sanctions by using non-North-Korean Flag vessels.

EC snuff ban not to be sniffed at - MARIEHAMN 26 October – A European Commission ban on selling snuff on Åland Islands-registered ships has caused Eckerö Ferries to review whether it should re-flag its fleet in Sweden, according to a Newsroom Finland report. The islands are an autonomous, Swedish-speaking administrative province of Finland, at the entrance to the Gulf of Bothnia. The Commission announced earlier this week that it would impose a €4,000 ($5,700) retrospective fine for every day that the Åland Islands allowed snuff to be sold on ships registered there. Björn Blomqvist, chief executive of the Åland-based Eckerö Line, pointed out that snuff is an important source of revenue for the company. The EC has threatened to take Finland to the European Court over the snuff issue and what the Commission sees as its inherent health risk. Eckerö Line and its sister company Eckerölinjen are owned by an Åland-based company. The latter operates a two-ship service from Sweden to the Åland Islands while Eckerö Line operates a service between Helsinki and Tallinn. - Fairplay Homepage (Used with Permission)

Actually, there are Finns who take the ferry solely for the purpose of purchasing snuff. More at Helsingin Sanomat which has "EU fines Åland over smokeless tobacco"