Welcome to this Columbus Day edition of Maritime Monday. A depiction of Columbus claiming possession of the New World in a chromolithograph made by the Prang Education Company in 1893. - Wikipedia

This Weeks Photos:
Here are some photos from Turkey's Bayraktar Shipping Group's website.

Bayraktar Shipping Group of Companies was founded 1945 and is one of the oldest and internationally recognised shipping companies in Turkey.

Since from companies foundation date, we are proud to say that the "Bayraktar" name has been a sign of success & quality in shipping both in national and international markets.

Bayraktar headquarters located on the Asian side of Ä°stanbul, serving its customer with modern fleet of MPP / Container and General cargo Vessels with professional and experienced staff in order to ensure customer satisfaction, with competitive and reliable transportation facilities. - Bayraktar Homepage 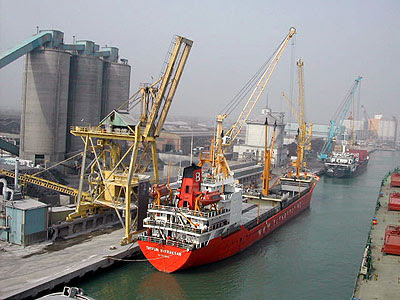 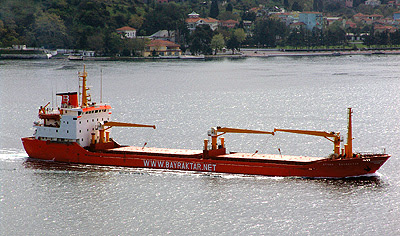 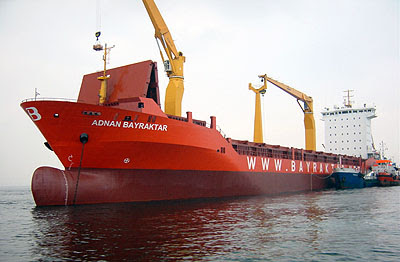 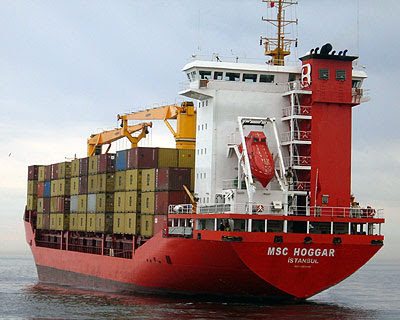 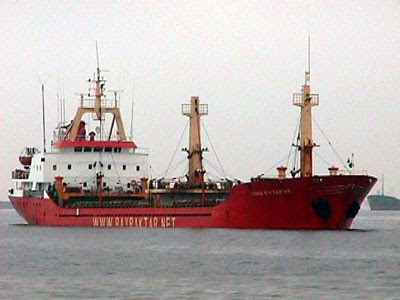 This Weeks Items:
EagleSpeak has the ongoing sad mystery of the "Missing Ships" REEF AZARIA and the INFINITY MARINE 1. Also, be sure to check out his weekly series "Sunday Ship History: USS Enterprise (CV-6)".

The Monitor has "BCFC Report Released on Queen of the North Sinking" which includes shocking declarations made by two people who heard the quartermaster say shortly after the accident "It is not my fault, it was not my fault, I was left alone." this would add a little context to why two officers involved have refused to cooperate with the investigation along with the quartermaster.

(The released documents can be found on the NSA website here. NOTE FOR THE PARANOID: Best not to click the link if you are concerned about the Government spying on you.) The following extracts are from a document named "3106037.pdf" under the title "Chronology of Events Surrounding USS Liberty Incident as Observed and Recorded by ALUSNA Tel Aviv, 15 Jun 1967" which was marked as declassified in December, 2006 and part of the June, 2007 release. These are damaging enough. Feel free to post in the comments other interesting details found in the newly released documents. (See here for a guide as to what was recently added.)

Robin Storm covers the "U. S. Coast Guard Rescue Swimmer Program". (The multi-talented Mr. Storm crosses over into the print world this week with an Op Ed in the Fort Worth Star Telegram about their coverage of the recent mishandling and movement of six nukes across the US in "Nuke transportation story has explosive implications")

The Garden Island covers some bitter anti-Superferry parents angry that they may be investigated for child abuse if their minor children violate any US Coast Guard Security Zone while protesting the Superferry.

Honolulu adviser has defeat for those claiming that the US Coast Guard Security Zone plans for the Superferry violates their right to free speech by preventing them from placing their bodies in the path of the ferry. (Well Duh. We have the right to keep and bear arms, but you still can't take your gun on an airplane.)

Note: There may be a ruling in the Hawaii Superferry case later today.

The Artful Blogger at gCaptain takes aim at fire drills. He promises to follow-up with suggestions on how to make your future fire drills more interesting and I hope that does not mean sounding the steering gear failure alarm at the conclusion of the weekly drill (as a surprise bonus drill) as your standing on the bridge wing with a couple others waiting to draw some cash from the Master, and none of you can figure out why he looks so annoyed. (Maybe it was because the 'failure' was not so obvious...)

gCaptain also has a poll going concerning what do you consider the best work/vacation rotation, so go and vote.

Telegraph (UK) covers Norway's shipowner's plan to ditch Norway for the UK and other more-welcoming jurisdictions in response to their own Government's backtracking on a tonnage tax deal as well as their intent to tax based on market values instead of book values which might double what shipping companies will have to pay back than if they had paid tax all along. --- I have heard that many of the shipowners in Norway are busy actively reviewing their options to reflag out of the two Norwegian Flag programs. I suspect that the first will do so prior to the end of the year.

Intel Center has the following report: "The Threat of Maritime Terrorism to Israel"

Ocra Marine Services has "Paris MoU To Conduct Concentrated Inspection Campaign" They plan to check that the Master and crew are familiar with their vessel's safety management system (SMS).

Don't know what the Paris MOU is? Check out their homepage here. Click on the photo below for a Port State detention summary on the Syrian-Flag 'rustbucket' OSAMA: 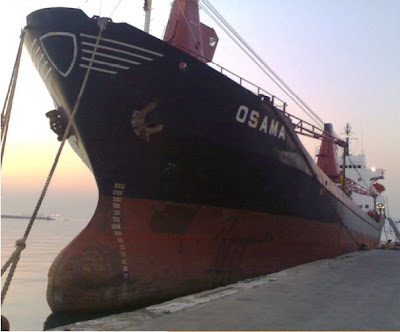 Tugster has floating drydock pictures of the tug STEPHEN-SCOTT. Check out the size of the screws.

The Yankee Sailor's ship plays host (at least that is what it sounds like) in Japan for New Zealand's HMNZS TE KAHA during a port visit. He does a little investigation of the New Zealand Navy's website and discovers that they are recruiting Americans (UK and Canada as well) with relevant experience for appointment from ratings positions right up to Lt. Commander in the Royal New Zealand Navy. (Be sure to check that doing so does not adversely affect your citizenship status.)

Maritime Links Editor's Blog asks "what is the most interesting job you have had since you began shipping- and what would you like to do the most?" So go and tell him.

IMC Brokers has more information on shipbreaking in "Where Ships Go to Die" including the environmental aspect. 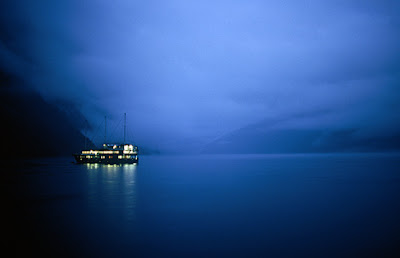 SAILORS, MARINERS & WARRIORS LEAGUE has the rescue by Canada's HMCS TORONTO on one Yemeni soldier who had to flee the island he was on when a volcano erupted forcing those on the island to flee.

The Stupid Shall Be Punished has "Anti-Submarine Protesters Can Be Funny" with examples.

The Perceptive Travel Blog has "Great waterways: the Panama Canal"

The International Congress of Maritime Museums is having their biennial Congress from 8-12 October, in Malta:

Maritime history, by its very nature, crosses oceans and brings nations and peoples together.

The International Congress of Maritime Museums is a professional guild of associations, organizations and individuals in the maritime preservation field, dedicated to international friendship, collegial cooperation & mutual understanding.
- Website

You can find their newsletters here.

Senate hearing on Law of the Sea Convention - The Senate Foreign Relations Committee conducted a hearing into whether the United States should ratify the United Nations Convention on the Law of the Sea. The US signed the Convention in 1984, but ratification pends. Senator Richard Lugar (R-IN) stated his support for ratification. Admiral Vernon Clark, USN (ret) testified that the US Navy is at a disadvantage without the navigational freedoms guaranteed by the Convention. Professor Bernard Oxman discussed the history of the Convention and its importance to US interests. Mr. Frank Gaffney, Center for Security Policy, explained that he thought the Convention was contrary to US national security, sovereignty, and economic interests. Mr. Fred Smith, Competitive Enterprise Institute, stated that the Convention was poorly drafted in 1984 and improvements since then have been insufficient. Mr. Paul Kelly, Gulf of Mexico Foundation, explained the importance of the Convention to the US energy industry. Mr. Joseph Cox, Chamber of Shipping of America, discussed the importance of the Convention to the US merchant marine industry. Mr. Douglas R. Burnett, Holland & Knight LLP, testified regarding the favorable impact of the Convention on the US and international submarine cable industries. (10/4/07). - Dennis Bryant Holland & Knight homepage (Used with Permission)

Windjammer fleet stranded - MIAMI BEACH 3 October – Windjammer Barefoot Cruises is on the brink of bankruptcy, with all cruises halted and crew stranded. After months of cash shortfalls as the company sought a rescue investor, Windjammer cancelled all sailings late last week. The company’s phone line now offers a recorded message referring to “trying times” and the website has gone offline. The company’s tall-ship Polynesia is stranded in Aruba; the Legacy in Costa Rica; Yankee Clipper in Trinidad; and Mandalay in Panama. A high-ranking shipboard source told Fairplay that attempts are being made to find a financial solution in the coming days. In August, it was reported that private equity firm TAG Virgin Islands would come to the rescue, but TAG told the Miami Herald this week that it was only acting as an advisor for Miami investor Jerry Ceder. According to the Herald, Ceder has just filed suit against Windjammer, claiming the line is courting other investors behind his back, contrary to an agreement. Owned by the trust of the Burke family, Windjammer has had a troubled history. Its tall-ship Fantome was lost in Hurricane Mitch in 1998, with all 31 crewmembers killed. Founder Captain Mike Burke was incapacitated by a stroke in 2005. His son Dan, who was appointed president in 2006, died of a drug overdose this March. - Fairplay Homepage (Used with Permission)

Previous Editions:
Here or click on the label below 'MaritimeMonday'.
.
Posted by Fred Fry at Monday, October 08, 2007