This unfortunately is a common sight in Finland. This man is so drunk that he is passed out in the center of the Finnish city of Tampere. Worse yet is that this guy got tanked well before noon. He is probably well-known to these policemen who have the thankless task of collecting him from the street. This will probably not be the last time either. Notice the lack of an ambulance. One would have been called had they suspected a problem other than too much alcohol.

Just remember if you are ever in Finland and your having a heart attack, be sure to not look like your just another drunk. 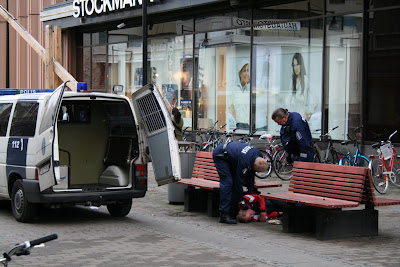 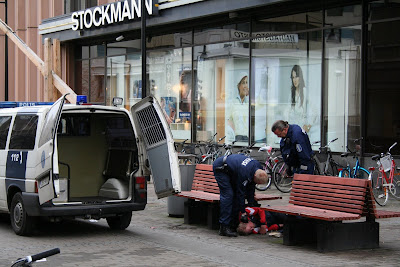 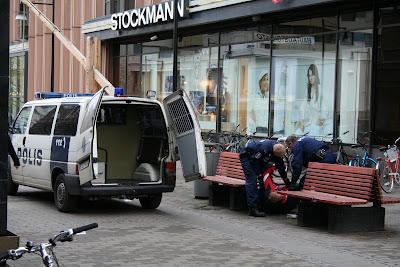 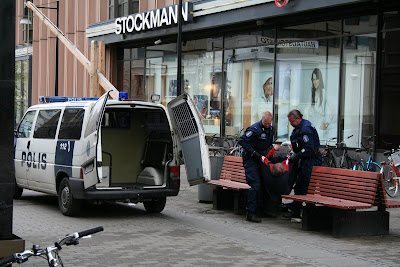 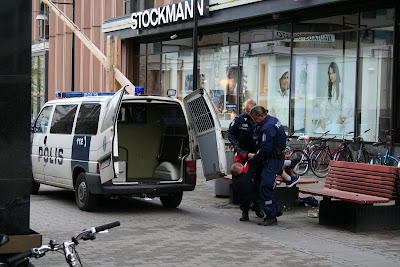 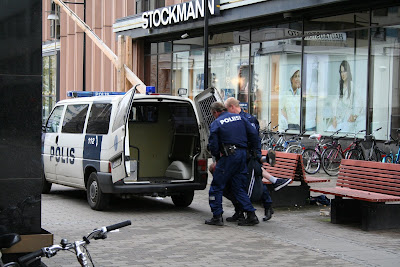 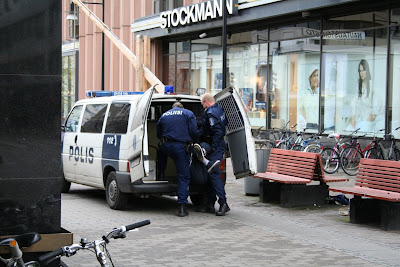 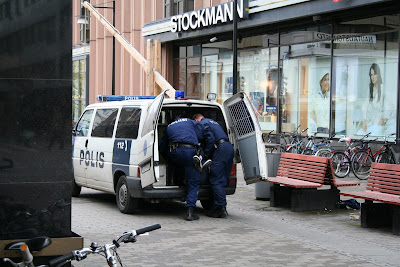 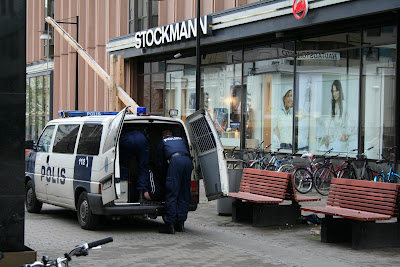 Just to be clear, I was not searching for this, I just ran across it soon after arriving into the city. Sure, you can see this most anywhere else in the western world, but In Finland, this is something you can see right in the center of town, on the busses, trams, wherever. Everywhere.

The Government here does have a solution to combat this problem. It is similar to their solution to solving most every problem. That is to raise taxes. So they plan to raise the tax on alcohol that is levied before levying the VAT (sales tax) on the price of the product and on the alcohol tax. (That is called double-taxation.)

Of course there are other ways to obtain alcohol. Hell, I was told how to make poisonous methanol drinkable by freezing out the 'poison'. Not that I would try such a thing, but then again, I would not be picked up off the sidewalk either.

There is also the issue that Finns, when drinking, tend to continue drinking until their wallet is empty. Higher prices just means that they go out with more money in their wallets.

Wow, out cold in front of Stockmann. By odd coincidence, I used to travel to Tampere on business and live weeks at a time at the Ilves. It is certainly true that when Finns decide to get drunk, they get really really drunk. It's the only place (at Vapuu, May Day) you will see girls so drunk they pull down their pants to have a piss in public. It's also true that everything seems very expensive, yet they manage to have a very good quality of life overall. Salaries are modest and there are taxes, but health care, social security, and higher education are all basically free, which makes a huge difference. Finns often have holiday cottages in the country, drive nice-enough cars, and take nice vacations overseas. I like it there.

Yes, the women issue you mentioned above is truly weird, as is how they will often also use the mens room in bars, even forming a line to take a stall over.

I am not sure what that says about being progressive......