Once again there are news reports that missiles manufactured in Iran are being used in Iraq to target US troops and cause general havoc.

If they are made in Iran, there is a factory. Bomb the sh*t out of it. If we do not have the will to do it, then ask the Israelis to do it for us.

This has been an ongoing issue. Confederate Yankee covered this story already in July. That is long enough to address this issue diplomatically, and this was reportedly discussed when the US met with Iran, only to be met with denials. 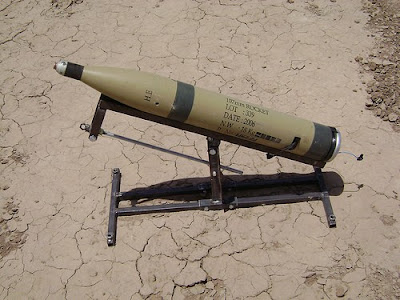 And if we are going to go to the trouble of leveling the missile factory, then we might as well also destroy the factory that is manufacturing the powerful EFPs being used as IEDs coming out of Iran. (PDF Report here.) 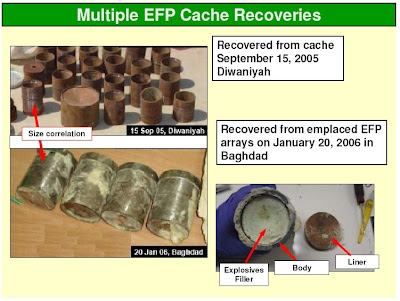 This act will have two immediate effects. One, reduce the flow of these weapons to terrorists as well as send a message to Iran that the US is prepared to act (in addition to sanctions) and that there is still a price to pay for attacking US forces.

So while Congress fights over how to restrict the President's options when it comes to stopping Iran, (reckless behavior in my opinion) it should be taken into account that those actions have the side effect of protecting the manufacture and supply of these weapons. The problem is not that these facilities cannot be targeted; it is a lack of will to use force to do so. The Iranians know this and are taking advantage of it. Do keep in mind that this would not be an attack, but more so a response to being attacked already.

your news on your blog is not supported by any media !? remember when iraq had all those WMD but there was none to go after and 2000 americans died for nothing ! there is no factory to go after in iran !
if there are weapons in iraq is what left over from the money that USA gave to saddam during iran - iraq war ,to but those weapons.
the pictures are fake just as those pictures of the satellites that general Pawel showed to Fox news !!!
you Americans need to open your eyes and see the world instead of keep getting brainwashed!
about the whole WMD in Iran even CIA came out and said listen im not gonna make the same mistake and Iran have not been fallowing the nuclear war head technology for years!

Thanks deranged poster posting from Florida.

Your response makes me think that you need to get your head out of whatever bubble your living in. Everyone, even the French and Russians believed that Saddam had WMD. Even his own generals thought he had the stuff. The general consensus is that it was shipped out of the country. Even so, the US made a report on what they found in Iraq. (Covered here: Those who cannot learn from history are doomed to repeat it.)

Iran is not to be trusted with nuclear material. The fact that the Russians and North Koreans are aiding them is evidence enough. They need nuclear power for what reason? Not enough oil? What?