This Weeks Photos:
This weeks photos are from the photo gallery of the Port Phillip Sea Pilots (Australia), which has been "Providing pilotage services to the ports of Melbourne, Geelong, and Westernport since 1839". 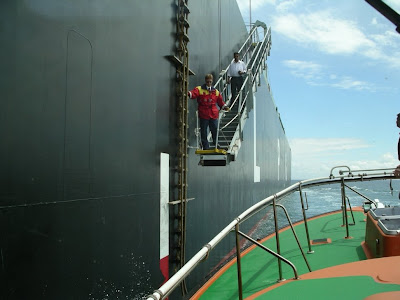 Pilot Launch alongside a vessel - A lot of skill on the coxswain's part is necessary to deliver the pilot safely aboard or take him safely off. 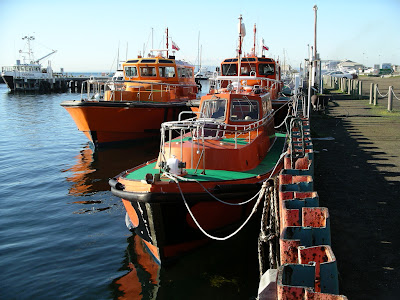 Pilot Launches - A different view of pilot launches at their mooring located adjacent to the Queenscliff Boat Repair Depot. 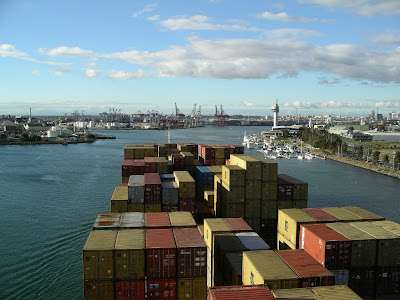 Vessel Arriving in Melbourne - Tremendous skill is needed from the pilot to safely bring the vessels in and out of ports safely. Currents, wind direction and speed can play a major part in navigation. The photo depicts a container vessel coming up the Yarra River. 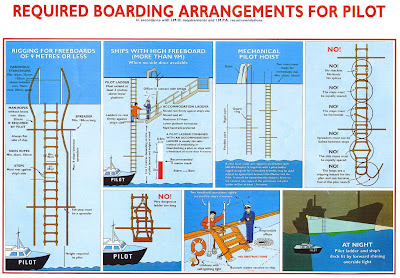 Eagle Speak has "Somalia: France offers to send anti-piracy warship off Somalia" and his weekly series "Sunday Ship History: "The Pathfinder of the Sea""

Hawaii Reporter has "Will the Mob Rule in Superferry Debate?" and "Hawaii Superferry Debate: Breaking Down the Kauai Numbers" which puts the impact of the ferry on Kauai into perspective. The ferry does not seems to amount to much compared to the 150+ flights arriving at the island daily. This comment at gCaptain also puts the issue in perspective on how ferry service transformed travel and the economy in the Canary Islands.

KHNL8 has "'Silent Majority' Speaks Out on Superferry Postponement"

Hengineer take a moment to post some more great photos of the USNS KANAWHA in the shipyard.

Peninsula Daily News covers five near-misses in Puget Sound one morning as ships were forced to maneuver out of the channel due to a small vessel that was traveling in the channel completely oblivious to the mess it was creating all around it. Luckily for those on the vessel, the ships did have enough sea room to leave the channel. It would have been a much different story otherwise.

The Associated Press has the death in the Port of Oakland after a container fell off a stack on the ship, crushing a longshoreman while it was being secured. (The story as reported makes no sense. Containers don't just fall off stacks while in port. Maybe the container was not set on top of the twistlocks properly? Freak wind gust? Tapped by the crane?)

gCaptain has an update to the seafarer tax return fiasco in "U.S. v. Martin Kapp – 10 Mariner Tax Questions Answered" which includes an explanation of the problem and gives some tips as to how you can check to see if your deductions resulted in a unearned tax deduction as well as an offer to review prior tax returns for free, with some very reasonable conditions attached.

Never Sea Land has the UK's search for a new Prison barge (or ship). New York City sold their two prison barges in 1992. It was always a bit odd going past one of them on the East River and having the prisoners shouting greetings at us from the exercise yard on top of the barge. Then there were the two old Staten Island Ferries that were used for housing at the Rikers Island Prison. They eventually were scrapped after failing to find a buyer.

Speaking of the Staten Island Ferry, I have the news that one of them is up for sale. 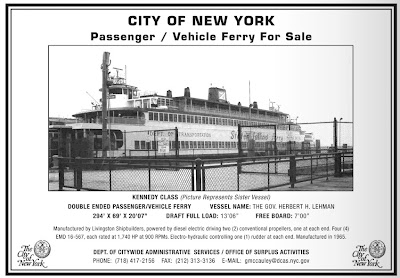 For Sale: THE GOV. HERBERT H. LEHMAN
The September edition of MarineLog is now online: 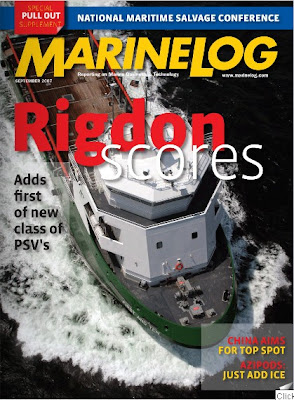 Bellona has "Sunken nuclear submarine K-159 can be lifted"

EU Referendum has two worthy updates on the EU's Galileo GPS System in "Stuffed" noting that yet another reason for creating this EU-controlled system will no longer be relevant by the time the system becomes operational and "It gets better and better" covering the need for €2.4 billion in additional funding to get the project moving since the program's private industry partners pretty much backed out of paying for it.

The Pilot Boat has two must reads: "Crazy bridge officers..." and "DGPS Fault!!!"

Tims Times has photos of the SPLENDOUR OF THE SEAS in Southampton shortly after its launch in 1996.

Kiwi at Sea is 'abused' by one of the MCA's Examiners in Southampton. (Such is a sailors life. Reminds me of a trip to the USCG office in Manhattan. After that, I did all my interaction with the Coast Guard through their wonderful Charleston, South Carolina Office.)

CDR Salamander has "Stupid is as stupid does" noting that there are better things to do with $600,000 than attempt to alter the appearance of some Navy barracks as viewed from space. I agree.

The Monitor covers the revelation that being a passenger on a ship hit by a rogue wave is not a valid excuse for suing the cruiseship's operator.

Maritime Compass has the job posting for an assistant archivist for The Nimitz Library located at the United States Naval Academy. (Note: Apply by 2 October!)

Unlike any other profession in the United States, seamen can be charged with felony manslaughter in cases where the prosecution can prove only simple negligence. In any other industry, it’s manslaughter only if gross negligence occurred.

Helsingin Sanomat covers the detention of the Captain and Chief Engineer of the LETTLANDS on suspicion of dumping oily waste in the Gulf of Finland.

The Daily Telegraph (Australia) has the end of cargo operations at Darling Harbor, and the end of Sydney as a working port.

MarEx Newsletter has the UN's Law of the Sea Convention's Tribunal's decision on the disputed sea border between Guyana and Suriname.

SAILORS, MARINERS & WARRIORS LEAGUE has "Venezuelan Ship Captured Loaded With Cocaine". No word on who owned or operated the vessel.

Shipping Times (UK) covers a record-size shipment of paper pulp offloaded in Aberdeen, Scotland. (The pulp was shipped from the US)

Sea * Fever has "Sea-change in a fishing community"

Sailor Girl has "The oceans: the very foundation of human life."

TSA & USCG – TWIC regulation – amendments - The Transportation Security Administration (TSA) and the US Coast Guard have amended the regulation establishing the Transportation Worker Identification Credential (TWIC) program. Additional non-resident aliens will be allowed to apply for a TWIC if they are working in a job that requires them to have unescorted access to a maritime facility. The fee structure has also been altered. The definition of secure areas at facilities located in the Commonwealth of the Northern Mariana Islands is changed to account for non-resident workers who are not required to obtain US work visas. The changes come into effect immediately. 72 Fed. Reg. 55043 (September 28, 2007). - Dennis Bryant Holland & Knight homepage (Used with Permission)

The regulations will permit holders of C1/D visas to apply for TWIC cards. This will (theoretically) permit seafarers on foreign-flag ships to apply for the cards.

Sinking of the ferry ESTONIA - On September 28, 1994, the ferry ESTONIA sank during a storm in the Baltic Sea. The sinking claimed 852 lives and the exact cause remains controversial. The ferry was engaged in an overnight crossing from Tallinn to Stockholm, carrying 989 passengers and crew. The official report states that the bow visor broke under the strain of the heavy weather, allowing large quantities of water to enter the car deck. The free-surface effect of the water on the open deck caused the ferry to list and rapidly sink. A variety of safety improvements were adopted subsequent to this incident. - Dennis Bryant Holland & Knight homepage (Used with Permission)

Cruise pax tax needs spending - JUNEAU 24 September The State of Alaska collected $26.6M from a controversial head tax on cruise passengers during the first half of this cruise season, but does not know how to spend the money. The funds were generated by a $46 passenger fee approved by Alaska voters in a ballot last year, but the state's Department of Revenue has yet to receive directions from the Alaska Legislature on how to distribute the funds. Johanna Bales, deputy director of the Department of Revenue's Tax Division, told Fairplay that the legislature has made no appropriation. "They're looking at it. They do have ideas on how to spend it. They just want to make sure that there isn't any violation of federal or state laws at the time they make an appropriation," she said. Head taxes collected during August and September have yet to be included in the revenues received during the 2007 cruise season. Alaskan voters approved the tax in August 2006 with the understanding that the funds would go towards state-owned port facilities and services to enhance the safety and efficiency of the cruise industry. The head tax was strongly opposed by the NorthWest Cruise Ship Association, representing all major Alaska cruise lines. - Fairplay Homepage (Used with Permission)

Here is the cover of the latest edition of Fairplay: 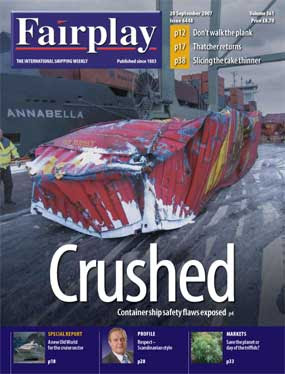 Previous Editions:
Here or click on the label below 'MaritimeMonday'.
.
Posted by Fred Fry at Monday, October 01, 2007

Thank you very much for the link!! It very much honours us! The text I posted I took it from [Oceans and Law of the Sea], a very important site I heard about through your blog!!