This Weeks Photos:
This weeks photos comes from the website of shipping line OOCL.

Orient Overseas Container Line (OOCL) is a wholly-owned subsidiary of Orient Overseas (International) Limited (OOIL), a public company (0316) listed on the Hong Kong Stock Exchange. OOCL is one of the world's largest integrated international container transportation, logistics and terminal companies. As one of Hong Kong's most recognized global brands, OOCL provides customers with fully-integrated logistics and containerized transportation services, with a network that encompasses Asia, Europe, North America and Australasia. OOCL is well respected in the industry with a reputation for providing customer-focused solutions, a quality-through-excellence approach and continual innovation. OOCL pioneered transportation coverage of China and is an industry leader in information technology. - Website 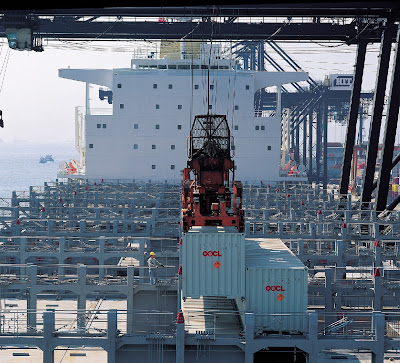 OOCL Containers being operated on board our vessel - OOCL 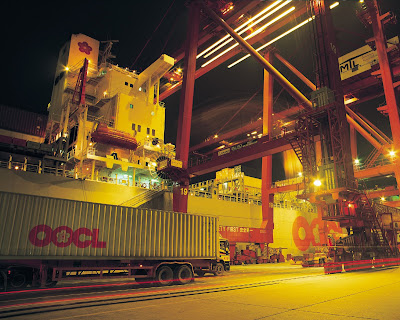 Sydväst Maritime in Turku, Finland is holding a Shipping Fair on the 19th and 20th of October 2007:

Sydväst Maritime organizes the shipping fair in Turku 19th and 20th October 2007. This is the eight shipping fair organized by Sydväst Maritime and provides the exhibitors an opportunity to make their products and services known within the Finnish maritime industry, and especially to meet future professionals in the realm of seafaring – the fair is widely visited by the students of Sydväst Maritime and other seafaring schools in Finland, and it is thus an excellent opportunity to recruit new crew members. The fair is aimed at the maritime industry, seafarers, shipping companies, authorities and maritime trainers.

I will be there sometime on the 19th.

Eagle Speak has the sad, never-ending story of "Somali pirates cruel to captured crews", that is, when they are not killing them. Also, be sure to check his weekly series and this weeks must read: "Sunday Ship History: Sea Escape".

So, my post last week about the Royal New Zealand Navy taking Americans is having you think about joining up? Well, be sure to read this post from Dean's World first to get an idea of how the locals will 'welcome' you. I have always wanted to Visit New Zealand. Not so much anymore. And this is an example of our friends! Thank God it's a big planet.

Neptunus Lex provides the story of Two hundred Marine infantrymen of 2nd Battalion, 5th Marine Regiment who chose to extend their enlistment in order to return to Iraq with the rest of their comrades. Go read their story.

Tims Times overhears radio communication between deck officers of an American-Flag vessel as they dock their vessel and the confusion that ensues when the captain fails to convert a distance from meters, as called by the docking pilot, to feet before passing it on to the deck. It is a very amusing read but this is an example of how accidents happen.

Opinion Journal covers the United Nations Convention on the Law of the Sea and asks (and answers) the question 'What would Reagan do?' concerning whether the US signs it or not in "Another U.N. Power Grab". (I guess the titles gives the tone of the articles away.)

CDR Salamander invites you to download a copy of the Maritime Strategy from 1986.

The LA Times gives some insight into the opposition in Kauai that some have over the Hawaii Superferry service including this comment on the general tone of the protesters: 'Now that I'm on this beautiful rock, let's kick the ladder off so no one else can get on.' Yes, development can be a problem, but as you read the story, much of what has been lost by the long-term residents, has actually been access to property that did not belong to them. Others have since purchased the property. Why didn't they?

MarEx Newsletter has more on the mess in Hawaii in "Profiles in Stupidity: Hawaii Superferry Idled by Courts"

EU Observer has "Faroe islands seek closer EU relations". They are part of Denmark, but oddly enough not part of the EU. This apparently has to do with problems over the EU Fishing Policy.

Cruise Bruise explains why Cuban nationals (still living in Cuba) do not work on foreign-flag cruiseships based in the US. 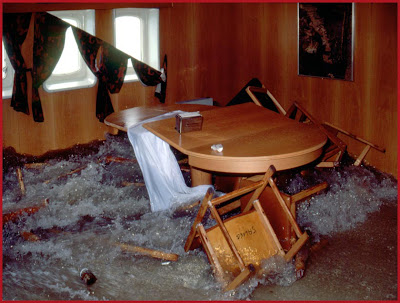 THE PRIVATE ISLANDS BLOG has Nova Scotia under attack as their islands are being marketed for sale on the internet to foreign investors, who are driving prices up.

The Uber-Review reviews "GPS + Mouse = Useless Tech Mish Mash". Yes, you can now buy a computer mouse equipped with a GPS. Not sure why. It might be useful if someone stole your mouse, but then it probably should State "GPS" on the damn thing.

NTSB – marine deaths rose slightly in 2006 - The National Transportation Safety Board (NTSB) issued a news release discussing transportation deaths in the United States during 2006. Marine deaths rose slightly over the figures for 2005 (from 789 to 805). Of these, 710 involved recreational boating. Marine deaths in the commercial sector were virtually unchanged. (10/4/07). - Dennis Bryant Holland & Knight homepage (Used with Permission)

Hijacking of the cruise ship ACHILLE LAURO - On October 7, 1985, four terrorists associated with the Palestine Liberation Front took control of the Italian cruise ship ACHILLE LAURO in the Mediterranean Sea off the coast of Egypt. The terrorists, headed by Abu Abbas, demanded that Israel release 50 detained Palestinians. After the Israelis refused, the terrorists shot American passenger Leon Klinghoffer, who was disabled and wheelchair-bound, and then threw him and his wheelchair into the water. Egypt eventually agreed to give the terrorists safe conduct to Tunisia. US Navy fighter jets intercepted the flight and forced it to land in Italy. Nine years later (November 30, 1994) the ship was destroyed and then sank following a fire off the coast of Somalia. - Dennis Bryant Holland & Knight homepage (Used with Permission)

EU plans integrated maritime policy - BRUSSELS 10 October – The European Commission today proposed a detailed action plan for an integrated maritime policy for the EU. “Scientific discoveries, huge strides in technological development, globalisation, climate change, and marine pollution are rapidly altering Europe’s relationship with the seas and oceans, with all the opportunities and challenges that this presents,” Commission president José Manuel Barroso said today. This plan is grounded in an extensive public consultation that ended last June, and represents the work of a Steering Group of 10 Commissioners chaired by Commissioner Joe Borg (maritime policy), who spoke of “strong stakeholder support” for the Commission’s initiative. The action plan lists a range of actions to be launched during the mandate of this Commission. They include a European “Maritime Transport Space” without barriers, a European Strategy for Marine Research, national integrated maritime policies to be developed by Member States, an integrated network for maritime surveillance, a roadmap towards maritime spatial planning by Member States, elimination of pirate fishing and destructive high seas bottom trawling, promotion of a European network of maritime clusters, a review of EU labour law exemptions for the shipping and fishing sectors, a European Marine Observation and Data Network and a strategy to mitigate the effects of climate change on coastal regions. - Fairplay Homepage (Used with Permission)

Windjammer raises hopes of revival - MIAMI BEACH 9 October – WINDJAMMER Barefoot Cruises hopes to resume operations under new ownership after a severe cash crunch halted service. All cruises were cancelled last week, the cruise line’s website went dead and crew on the line’s four tall ships were temporarily stranded in the Caribbean without support. But the website came back online today, with a posted press release insisting that the company’s “heart is still beating”. According to Danny Walsh, grandson of founder Captain Michael Burke, “We are actively working with several investor groups on a viable plan.” The release also claimed that on Friday “critical payments were made to all shipboard staff and other immediate debt obligations are planned shortly”. Windjammer said that “arrangements are now underway to restart the cruises in the Caribbean and Costa Rica” and that “essential crew and staff are working to continue operations on all ships in the Windjammer inventory”. The cash crunch that halted operations last week left the tall-ship Polynesia stuck in Aruba, the Legacy in Costa Rica, the Yankee Clipper in Trinidad and Mandalay in Panama. Windjammer said today that cruises will be cancelled at least through the week of 21 October. - Fairplay Homepage (Used with Permission)

Previous Editions:
Here or click on the label below 'MaritimeMonday'.
.
Posted by Fred Fry at Monday, October 15, 2007

Thanks for highlighting my post for the Tall Ship Semester for Girls which is the type of powerful maritime education program that we need more of.

Keep up the great work. Already looking forward to next Monday!