From the Press Release:

BOSTON - A Coast Guard rescue crew called upon Sponge Bob Square Pants for help in a tight situation aboard a Gloucester-based vessel sinking near Gloucester Harbor around 7:15 p.m., Saturday.

The Coast Guard launched a 25-foot response boat and rescue crew from Station Gloucester, which arrived on scene within minutes, and removed two crewmembers from the Clam Juice. Two Coast Guard crewmembers boarded the Clam Juice with a dewatering pump and began pumping the estimated 2,000 gallons of water out of the sinking vessel.

Upon dewatering the vessel, a large crack in the vessel's exhaust pipe was revealed as the source of the flooding. The best solution was to plug the exhaust hole externally with a round object, and rescuers began searching the vessel for something that fit the bill.

"I wish we had our football," said Petty Officer Second Class Daniel Bartholomew of the rescue crew. Finally, a crewmember aboard the Clam Juice grabbed a Sponge Bob Nerf football that was down below.

True to Sponge Bob's character, the squishy football sealed the hole perfectly and allowed the Clam Juice to be towed to Browns Yacht Yard for more permanent repairs.
No injuries were reported of the four crewmembers. Sponge Bob served his duty and returned to port without a scratch.

"Luckily, Sponge Bob got a day off so he was available to assist us with this rescue," said Chief Petty Officer Paul Wells, executive petty officer at Station Gloucester. - USCG

This is a perfect example of taking advantage of the materials around you. 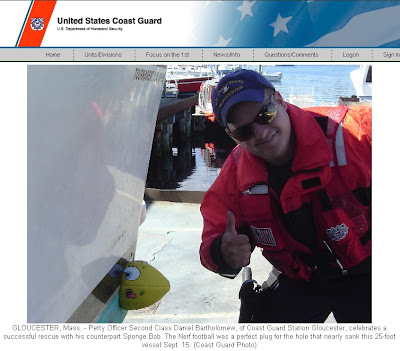