Welcome to this Labor Day edition of Maritime Monday.

You can find last week's edition here.
This Weeks Photos:
The USNS COMFORT is a favorite of Fred Fry. Check out Navy NewStand for the latest press release "Haiti Welcomes Comfort".

Here are some photos from earlier this summer as the vessel went through the Panama Canal: 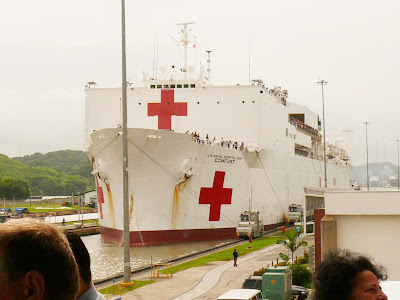 PANAMA CANAL (July 10, 2007) -- The hospital ship USNS Comfort passes through the Panama Canal July 10, traveling from the Atlantic to the Pacific Ocean. Comfort is on a four-month humanitarian deployment to Latin America and the Caribbean to provide medical treatment to patients in a dozen countries. While deployed, Comfort is under the operational control of U.S. Naval Forces Southern Command and tactical control of Destroyer Squadron 24. Photo by U.S. Embassy, Panama - US Southern Command 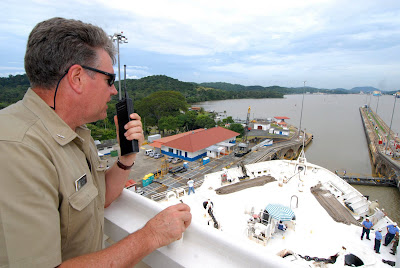 This Weeks Items:
EagleSpeak has "Sea crimes: Illegal migrants abandoned at sea, in need of help". So while the President of the European Union sheds tears for convicted murders about to be executed in the United States, he does nothing to help migrants adrift in the Mediterranean Sea, right in his own backyard. Also, check out his weekly series "Sunday Ship History: USS Finback (SS-230)"

The Malta Independent has the arrests by Italy of seven Tunisian fishermen who rescued 44 African migrants who were in distress at sea. "The seven have been charged with having helped illegal immigrant trafficking"

The MarEx Newsletter has "Malta and Libya Meet to Discuss SAR"

BitterEnd has an update on last years QUEEN OF THE NORTH in which the investigation will be reopened.

Hengineer has some great photos of pieces of (one of?) the main engines as it is taken apart on the USNS Kanawha (T-AO 196).

Cuba Cruising Net has the not very surprising story of what happens when you are unlucky enough to run your sailboat aground in Cuba in "Shipwreck in Cuba". (Seems that the site is having issues, so if you can't initially connect, try again later. It is well worth the read, especially for anyone sailing off Cuba. If you can't get the story, email me for a copy.)

The Washington Post covers the attempts by environmental lunatics to stop the ferry on Environmental grounds. (This is the first alternative to travel between the islands other than by plane.)

Local Station KHNL 8 has "Superferry Employees Caught in the Middle"

Apparently I touched a nerve with one of the protesters with my post "Econuts and Moonbats Stop Hawaii Superferry (For Now)".

Note to protesters: Targeting ships and their crews is the wrong way to win our concern. You are just seen as spoiled brats.

The New Zealand Company of Master Mariners has the interesting story of the Captain, chief Mate and Bosun of the Reefership CORAL SEA who have been sitting in a high security jail in Greece since mid-July after 50+ kilos of cocaine were found in a couple boxes of bananas that were discharged there. Of note was that the ship did not know its destination until almost two weeks after the ship left the loading port so it would have been impossible to stash the drugs with the expectation that it was going to be received by anyone expecting it. The ship has been arrested as well. Go read the story.

The Pilot Boat presents two stories in abuse of the ship's officers, by the vessel operators/owners.

Scandinavian Shipping Gazette has the newest Helsinki-Tallinn ferry, the Tallink STAR. (I wonder what they were thinking when they picked the hull color. It looks like they painted the ship in engine room puke green.)

Read or watch the 60 Minutes episode "The Ship Breakers Of Bangladesh". Very interesting. You can find the related photo essay here. (I had linked to a blog last year that had covered this episode, but now you can watch the program for yourself.)

Marine Log has the steady stream of orders for shipyards in Germany.

The Yankee Sailor has a summary of his last day at work before going on leave. The day included an ingress of water "knee-deep" while servicing some through-hull connections.

Tim at Tims Times still appears to be out of communication range, so enjoy photos from his post of last year from the Russian Port of Kaliningrad.

Shipping Times (UK) has the collision of the new containership JORK RELIANCE with lock gates that has put parts of the Kiel Canal out of operation. (I assume that there are two sets of locks where the accident happened.) Wikipedia has a summary about the canal, claimed to be the world's busiest artificial waterway, here.

Robin Storm has coverage of the accident report for the M/V ARATERE, which suffered damage to ship, cargo and passengers due to heavy rolling. (Two rolls of over 50 degrees. That is more than halfway to turning your floor into a wall.) Here is the 102 page PDF Report. 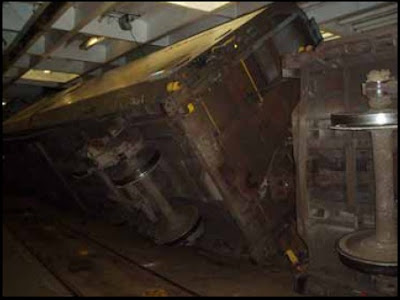 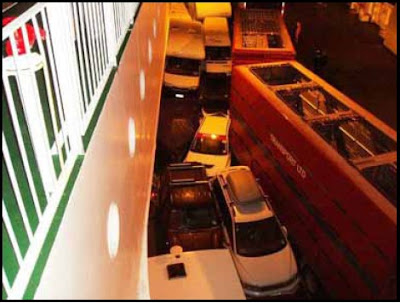 Neptunus Lex debunks some idiotic conspiracy post that the US Navy was getting ready to bomb all corners of Iran any day now that was being passed off as coming from an LSO on a 'Supercarrier'.

Professional Mariner has coverage of the first planned FPSO in the Gulf of Mexico.

American Shipper has coverage of ships in the Great Lakes being forced to light load due to a lack or required dredging.

Kiwi at Sea gives up a ship assignment as too many things are underway ashore.

The Stupid Shall Be Punished asks "Can Submarines Help Enforce Immigration Laws?" covering a recent experience of the USS SAN JUAN.

CDR Salamander has US Naval Academy Midshipman and Navy Football player Jason Tomlinson's decision to pass on graduation in the hopes that the Navy will simply let him go with a $140,000 bill for his education so that he can try his luck with the NFL. (All of the Academies have football programs. Not being a team member, I (and many others) resented how they got out of inspections and countless other activities to 'train' (read sleep) in the locker room. then there was the mandatory attendance at the home games. Nothing like being told that you can't go out sailing at a maritime academy because your expected to go to the football game! Keep the programs, but free the rest of midshipmen/cadets from being forced boosters.) Go read what the Navy is likely to do to him for opting-out.

Tugster has amazing photos of the "NYC Tugboat Race".

The Pilot Boat has some photos of "Fishing vessels in Aveiro".

Fraptor22 has posted this amazing video at YouTube of a Chinook picking up a seal team by dropping it's tail into the water:

I found the video as Dark Roasted Blend in their post "Lords of the Logistics, part 5"

Here is a photo of the recovered hatch cover as posted on the MCA Website, in a press released aptly titled "ANYONE LOST A 25 TONNE HATCH COVER?" 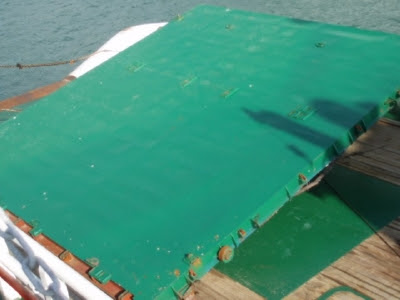 Dockers warn on Puerto Rico plan - SAN JUAN 28 August – Stevedores object to the Puerto Rico government’s plan to shift general cargo terminals from San Juan to Ponce to make way for expanded cruise and tourism facilities at the island’s capital. The International Longshoremen’s Association (ILA) – which represents dockers at both San Juan and Ponce – said in a statement on Friday: “There is a sinister move afoot that will have serious consequences for every Puerto Rican and especially for those in local businesses that are dependent upon goods coming to and from them via the Port of San Juan.” The union warned that Ponce doesn’t have the facilities to handle the cargo and that transport costs to move cargo inland will be much higher from Ponce’s port on the southern coast. Fernando Rivera, president of the Caribbean Shipping Association and vice president of Harbor Bunkering, told Fairplay that the issue is still under discussion by the government – but is supported by both political parties. He said the plan calls for converting San Juan's piers 13 and 14 into cruise and tourist-related sites to include hotels and attractions. While Rivera acknowledged that inland transfer costs for cargo will be higher from Ponce, he also noted that port costs are lower there and the move would reduce road congestion in San Juan. - Fairplay Homepage (Used with Permission)

Ahoy Fred me hearty, I'm back from the deep, good to be able to read Freds blog again!

Welcome back to having an internet connection!

Thanks for the link Fred Fry, glad you enjoyed the pictures, more will be coming soon (including another shot or two of me).

Yes the T-AO class oiler has twin Colt-Pielsticks for main propulsion, and those came out of the Port Main Engine.