Return of the Free Speech Thieves

This was to be expected. The free speech thieves have returned to disrupt Congressional hearings on Iraq. Look at these clowns... 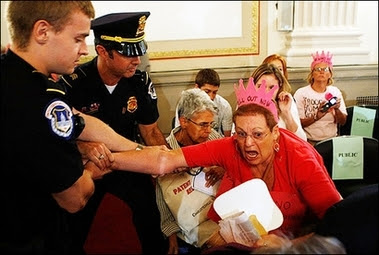 Capitol Hill police officers remove a protester from the crowd during a joint hearing of the House Armed Services Committee and House Foreign Relations Committee featuring Gen. David Petraeus and US Ambassador to Iraq Ryan Crocker in Washington, DC. What was billed as the most electrifying day of testimony in Congress for many years lurched into farce Monday as Petraeus struggled to be heard and members of the anti-war group Code Pink were dragged kicking from the room.(AFP/Getty Images/Alex Wong) - Yahoo News 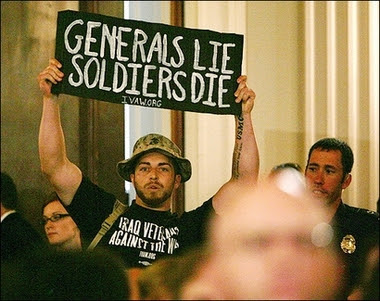 A protester holds up a sign before being escorted out by Capitol Hill Police during testimony from the US Commander in Iraq General David Petraeus before a joint hearing of the House Armed Services and Foreign Affairs committees on the state of the war on Capitol Hill in Washington, DC. What was billed as the most electrifying day of testimony in Congress for many years lurched into farce Monday as Petraeus struggled to be heard and members of the anti-war group Code Pink were dragged kicking from the room.(AFP/Tim Sloan) - Yahoo News 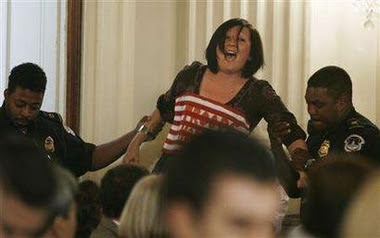 These protesters have the right to protest elsewhere. They also had the right to attend the hearing. They did not have the right to disrupt it. For doing so, it was claimed that they would be arrested and prosecuted to the full extent of the law. Most likely, the harshest penalty they will receive was the rough handling they got as they were escorted out of the room. That is a shame, since there are 300 million of us, and they took seats from others who would not have abused the privilege to attend the meeting.

Let's be clear, disrupting a meeting is not free speech, it is hijacking the meeting for their own purposes, whatever they are. 'Codepink' and all the other protest groups can legally protest outside. However, that does not generate the exposure that they think they deserve so they have to go and interrupt meetings like this one to get some press coverage. This shows complete disrespect for the right of free speech because they are trampling over the free speech of others as well as trampling on the rights of the rest of us to not listen to them. (They also have the right to visit the offices of Congressmen to express their views. Then again, visiting your congressmen does not normally get you into the news.)

How about blogging instead, or perhaps even taking out a full-page ad in the New York Times, like this obscene one by moveon.org: 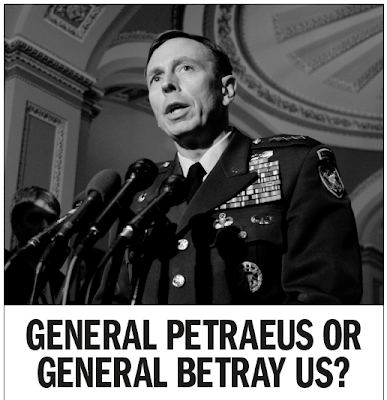 Of course it helps if you have friends at the paper to extend you a discount. Personally, I think the ad is shameful, however, let them waste their money on BS like this. Let them waste all their money on ads that show their true intentions. Then, let them offer to help Democrats in their election campaigns.
Original Post:
Free Speech Thieves - August 2006
Posted by Fred Fry at Tuesday, September 11, 2007