This Weeks Photos:
This week we have the pipe laying vessel/barge ACERGY PIPER

The Acergy Piper, one of the world’s most efficient semi-submersible pipelay barges, has an outstanding track record of achievement in the challenging environmental conditions of the UK and Norwegian sectors of the North Sea.

She has two double-jointing lines for one main firing line with five welding stations, one NDT station and two pipe-coating stations. With the ability to lay pipe of 8'' to 60'' diameter with fully automated welding systems, she is currently laying the world’s longest trunkline between Norway and England. Langeled trunkline is 1200 km long, 44''/42'' diameter and runs between Nyhamna in northern Norway and Easington on the south east coast of England. The route includes crossing the Norwegian trench at water depths of 380 m. Langeled trunkline lay is scheduled for completion in 2006. She has also successfully carried out significant pipe lay and trunkline lay operations in the North Sea, West Africa, the Mediterranean and the Gulf of Mexico. - Acergy (PDF Link)

Once the sections of pipe have been welded together, the whole tube is lowered out from the back of Acergy Piper and onto the seabed at carefully calculated angles. Text and photos: Jorn Madslien. - BBC

There is a related BBC photo slide show here.

This Weeks Items:
Eagle Speak has the severe listing and complete evacuation of the cruise ship DREAM in Rhodes. A number of ships officers have since been arrested.

Also be sure to check out Eagle Speak's weekly series "Sunday Ship History: "I have not yet begun to fight"" covering Captain John Paul Jones.

The BBC has the desperate measure "Europe bans bluefin tuna fishing". Don't worry, they are not really serious as they only banned it for the rest of the year. If they were serious, they would permanently ban fishing for the tuna in the Mediterranean, as they are rounded up literally like 'fish in a barrel' after they migrate there from the Atlantic. If you did not read "Tuna Wars: The ruthless tuna pirates who are driving these majestic creatures to extinction" which I linked to in Maritime Monday 73, here is a second chance. 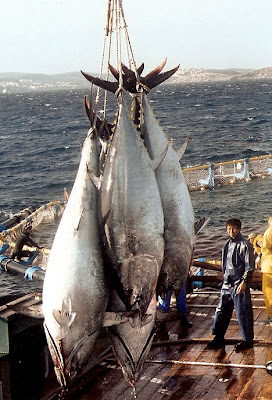 (Sleeping with the fishes: Illegal bluefin tuna ranching has links with the Mafia - Daily Mail, UK)

It is going to take longer than a couple months to grow more tuna like these.

You've heard of dolphin-friendly tuna. Tuna fishing is also very unfriendly - but this time to the tuna populations themselves because supply just cannot keep up with demand. Japan is the world's biggest consumer of fresh and frozen tuna, at 30 percent of global tuna production, while the EU consumes 40 percent of the global canned tuna market. Pacific experts warned at a recent convention (October 2003) that unless urgent action is taken, key tuna populations are likely to begin crashing within 5 years due to the pressure from industrial fishing fleets migrating from collapsed fisheries to the Pacific. Once begun, this scenario will quickly lead to the destruction of Pacific fisheries and a catastrophic collapse of key Pacific Island economies. - Greenpeace

gCaptain has "Like It Or Not; It’s Here - Fighting LNG Ship Fires."
CDR Salamander has the interesting read "The fundamentals of running aground" covering the grounding of the US Navy Destroyer ARLEIGH BURKE and the loss of the Captain's command.
Neptunus Lex has another amazing read in Naval Officer self-destruction. This one claims the career of a command officer for encouraging the crew to drink, including those on watch while in port during a celebration. It probably would not have been a problem, were it not for the fire. He probably would have gotten away with covering it up, were it not for the second fire.
Neptunus Lex also has coverage of a sister of a Naval Academy Midshipmen deal with the surprising discovery that the Naval Academy is really the military. And this coming from an Ivy-league student. I guess she never made it to a mixer, or whatever they call it at the USNA.
Tims Times has "Mark 1 Eyeball Method" with a reminder to get your eyeballs off the bridge electronics and point them out the windows.
The Washington Post:

"New rules that will require the scanning of all cargo containers imported to the United States, a move to stop nuclear weapons being shipped in, are expensive, unnecessary and misguided, industry and security experts said." - Experts say U.S. nuke cargo scan rules "unworkable"

The Ellesworth American covers the fact that you're never too old to join the US Merchant Marine.
Cargo Law has amazing photos of the loss of the M/V DENDEN right off the beach in Mangalore, India.
The Swedish Club (Marine Insurer) has "Study of major accidents highlights “Competence erosion”"
The Monitor (Canada) covers rules changes for the Canadian Navy that will permit it to dump garbage and sewage into the Arctic, basically so that they can patrol the Arctic to ensure that others don't do the same.
Robin Storm has "NATO assets used in survey of sunken Russian submarine"
The Philippines, one of the world's largest sources of maritime labor, is running out of seafarers.
Kiwi at Sea covers his numerous failed attempts to join the New Zealand Seamans Union since 1992. Only now that their membership has been decimated by age are they prepared to open the door.
MarEx Newsletter has "Canada May Ban LNG Supertankers". This will however affect transport to the US, which is most likely to result in a dispute between the two countries over the right of free passage.
The Pilot Boat has a photo of the Portuguese ship TOMAR.

Daily Yomiuri Online covers the UN's resolution expressing support for Japan's Maritime Self-defense Force's refueling operations in the Indian Ocean as part of Operation Enduring Freedom.
Yankee Sailor has the story that Japan's Maritime Self-defense Force 'illegally' transferred fuel to the USS KITTY HAWK, which was headed for operations by Iraq and not acting in part of Operation Enduring Freedom off Afghanistan.
HMS-SOMERSET-CO (Life onboard a Royal Navy Type 23 Frigate - Seen through the eyes of her Commanding Officer) has no shortage of volunteers to drive the target float. (Stupidity is not against the law, but it might improve your chances for a long-life.) Go read the rest and view the other photos of a well-played prank on some naive crewmen. (Found at Yankee Sailor) 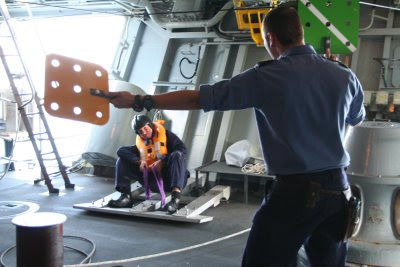 EITB24 has the story of 15 Palestinians from the Gaza strip found in a shipping container when the vessel they were on called Barcelona, Spain. The ship was headed for the UK. No word on where the container was headed.
American Shipper has the story of suspected bribes made by the Shipping Company of India to Indian Customs to clear transshipment cargo. It includes this money quote:

Maybe graft doesn’t seem that unusual, but the unique situation here is that SCI is a state-run entity, meaning that one division of the government was essentially greasing the palms of another division. - American Shipper

Now that is funny.


Sea * Fever has "The maritime adventures of Pete Brown and his barrel of beer"
The Stupid Shall Be Punished has no ordinary UNREP photo. It is the view from a submarine periscope. (On my last ship, back in 1994-95, we were the 'high value target' for the sub to attack in training. Halfway through the exercise I suggested to the Captain that perhaps it would be a good idea for us to turn off the world's only 3.5 kHz sonar transducer, just to make it a little more challenging for the sub. The scientists were really embarrassed, especially considering that my comment was in response to them wanting me to blacken ship by covering over all the portholes. Five minutes later the sub had launched its flare ending the argument.)
Greenpeace has "Alaska Polar Bears Doomed" (Quotes are theirs)
Never Sea Land has a Real mermaid.

English Russia has "Murmansk Military Objects" which gives a Google Earth eye's view of the Naval Wasteland that is now Murmansk. Lots and lots of scuttled ships. (From this last winter.)
Maritime Compass has "The real Jack Aubrey?"

Finally, Norwegian Cruise Lines and Lego are holding a shipbuilding contest. First prize is a cruise for four. There is even a 15 and over category. (Click on the photo for details) 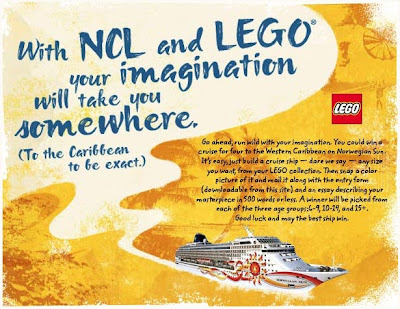 Criminals: beware of Sea Mounties - VANCOUVER 17 September – Criminals attempting to escape by water across the Canada-US border could be in for a surprise when they find themselves pursued by the Royal Canadian Mounted Police into the US, or by the US Coast Guard into Canadian waters. The programme, called Operation Shiprider, has been in operation since September 2005, but became public knowledge only recently when USCG officers were seen operating in Canadian waters. The operation is targeting organised crime on both sides of the border and gives police the authority to act as law enforcement officers in another country. Project Shiprider involves joint patrols off the south coast of British Columbia and on the St Clair River and Windsor/Detroit area in Eastern Canada. In a statement issued at the launch of the scheme, the RCMP said that it will help assess the viability of developing a longer-term Canada-US programme for stronger maritime law enforcement and emergency response. Boats used during Operation Shiprider are clearly marked as police vessels, and according to the statement the joint RCMP-USCG operations include "detection, monitoring, pursuit and boarding of suspect vessels in US and Canadian waters." In February 2004, Jamaica signed a Shiprider agreement with the US, which allows the USCG to board foreign-flag vessels within its territorial waters. - Fairplay Homepage (Used with Permission)