I was taking a friend on a tour of Washington, DC by night and as we walked through the Franklin Delano Roosevelt Memorial she asked "where are the security guards?" I told her to ask the Park Ranger who was right behind her.

I can't find anything in the news about this, so lets call it an ** EXCLUSIVE ** 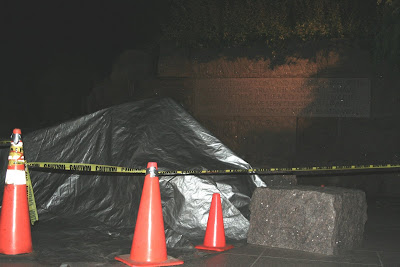 Tarp covers vandalized stones at FDR Memorial - 21 Sept 07
This is just plain shameful behavior. The vandals should be made examples of with stiff jail time and fines to cover the expense of repairing the damage.

P.S.
I asked about the vandalism at the Vietnam Memorial. The Park Ranger mentioned that the opinion is now that the damage was probably the result of an accident. (So pay attention to the signs that say no eating or drinking!)
-
Posted by Fred Fry at Saturday, September 22, 2007