One dream, especially in Europe, is of the future society, a Modern Society. Part of getting there, for them, was the formation of the European Union. The EU would fulfill many goals for getting to this Modern Society, including fostering a healthy growing economy, standardization of all sorts of things, facilitate free trade and eliminate the threat of wars with the eventual benefit of not needing military forces.
The United Nations was also setup for many similar reasons. While maybe not including the Modern Society, surely for the advance of mankind in the lesser-developed parts of the world, which in itself helps the rest of us advance even farther.
The world can easily be on the path to a modern society with the United States around. Most likely, the US will be a major contributor of what is required to get us to the level of a modern society. For all the criticism, the US does way more good that bad. The good being the norm and the bad being the exception. Even with the bad, the US goes to great lengths to correct any wrongs its responsible for.
Then you have these countries here listed below. They are examples of what is wrong with this planet. Some of them are bad actors. Others are taking advantage of the situation by protecting them from sanctions. Nonetheless, the result is Governments that really have no place in a modern society. Good lucking reaching a Utopia with them guys around. So here is a short list on the countries I believe are preventing the World from evolving into a much better place.
The Bad States:

Then you have the countries that Should Know Better:

Spain - Backing Cuba's human rights abuses. Support of Venezuela, ......
China - Backing of Sudan, Burma's Myanmar Government and North Korea. Lack of human rights.
Russia - The Russian mafia is infamous for its ruthlessness. Now we have Putin's Russia acting like mafia thugs. Executing unfriendly media. Sending assassins abroad. Using energy supplies as a weapon. Ignoring their responsibilities to clean up the nuclear waste in their own backyard, instead leaving the West to pay for it. This attitude goes back to the foundation of the post-communist Russia, when they demanded that Poland pay the expense of withdrawing the Russian Army from Poland. Providing Iran with nuclear technology and weapons.
South Africa - Demands that African countries alone should deal with African problems yet does nothing to stop Zimbabwe's downward spiral other then demand that other nations not act.

Two of the countries listed above are permanent members of the United Nations Security Council. When the UN fails to adopt a resolution against a 'rogue' state, it is normally one of these two that stopped the UN from acting. 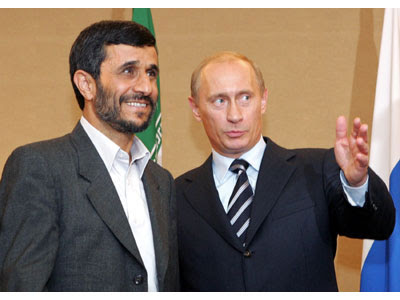 Putin and Ahmadinejad - Each the other's most Useful Idiot

Speaking of the United Nations:
This is the one entity that was supposed to help lift the world towards the modern society. Instead, it is helping countries drift down to the lowest common denominator. This is the Organization that protects the 'rights' of the countries listed above to abuse their own populations (In violation of UN Conventions) as well as abandon them while the leadership sucks the country dry of assets. This is great for the UN, which can then better reinforce its own need by assuming the responsibility to provide for these people, through the World Food Program and UN Development Program. This may even give those causing the tragedy another income source if the aid agencies pay bribes or facilitation fees to get aid to those they wish to help. Worse, a good portion of the aid may never reach those they intend to help, instead being diverted, again to Government authorities.
United Nations Human Rights Council
This council knows of no human rights violation on this planet other than those claimed to be committed by Israel.
The council is so problematic that even the new UN Secretary General has criticized its work.

United Nations Secretary-General Ban Ki-moon joined Western nations on Wednesday in criticizing the world body's own Human Rights Council for "picking on Israel" as part of an agreement on its working rules.
The European Union, Canada and the United States have already attacked the deal reached in Geneva on Monday under which Israel's actions would become a permanent item on the Human Rights Council's agenda.
A UN statement said: "The Secretary-General is disappointed at the council's decision to single out only one specific regional item given the range and scope of allegations of human rights violations throughout the world." (June, 2007) - Haaretz

Now these anchor countries claim that positions like mine above are typical of the Western Nations meddling in their internal affairs while at the same time blaming the Western nations for any problems they might admit to having. Yet as bad and imperialistic as it sounds, the world would be a much better place, if these third-world countries would be a little bit more like the United States. (Or Canada, or Australia, or New Zealand, or the UK, Ireland, Estonia...)

And finally, lets not forget the International Press, which in many cases completely fails to investigate the countries above, or fails to report information damaging to these rogue state. Take this one recent example during an interview with Iranian President Ahmadinejad:

When an Israeli journalist asked him something, he just smiled and said: "Next question."

Then the wife of an Israeli soldier abducted by Hizbullah got up and asked Iran to cooperate with the Red Cross to discover his fate. But her question was ignored, and she was drowned out by more questions. - Guardian (As spotted at LGF)

There would far fewer problems in the world if the press reported the news fairly and accurately, instead of distorting stories and sitting on others. Of course, they would not get such a free pass if it were not for all the moonbats parroting their false messages. The Israeli soldiers held hostage by Hamas and Hizbullah is a perfect example.

We have a far way to go before we reach that Modern society as long as these parties listed above have anything to do with it.

Good post, but you forgot to mention Putin's desire to return to a fascist-form of communism is in the realm of "should know better".

The real problem with international organizations is the qualifications for membership. So much emphasis is placed on the concept of inclusion - if you are a member then we will be able to talk and work things out - that there are no real qualifications.

UN membership should be dependent upon a country adopting basic principles of government.

Does the original charter include such demands? If so they have been thrown by the wayside.

Even if they don't adopt basic principles of government, they could at least sign on to the human rights doctrine.