Lets compare the refugee problems of a couple of troubled countries:

UNHCR estimates that more than 4.2 million Iraqis have left their homes. Of these, some 2.2 million Iraqis are displaced internally, while more than 2 million have fled to neighbouring states, particularly Syria and Jordan. Many were displaced prior to 2003, but an increasing number are fleeing now. In 2006, Iraqis had become the leading nationality seeking asylum in Europe. - UNHCR

Zimbabwe is spiralling out of control with real inflation running at 13,000 per cent, four out of five of the population live in abject poverty and four million others having fled to neighbouring countries, the report said. - The Independent, UK

Almost 30% of the population of Zimbabwe has fled the country, with the US Military nowhere to be seen. There are however calls for the UK to invade. Most likely there will be some foreign intervention within the next year due to the complete destruction of most everything there. (Might this be one reason they are reducing their operations in Iraq?) 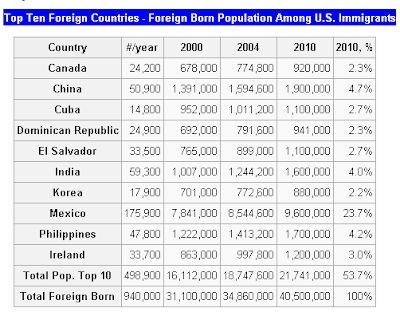 There were an estimated 8.5 million illegal alien Mexicans in the US in 2004.

That comes out to almost 8% of all Mexicans deciding that it was better to live in the US illegally than to stay in Mexico. The total percentage is much higher as some studies state that for every Mexican living in the US illegally, there is one living her legally. That would make the percentage of Mexicans living in the US 15% of the total population. (I think the generally accepted number is 10%, which again is higher than Iraq, and no small feat considering that amounts to about 30% of Iraq's total population in comparison.)

So despite enduring a war and years of instability, Iraq has less of a migrant/refugee problem than Mexico. How bad is it in Mexico? Bad enough for Illegal aliens who give up on living in Florida to flee north to Canada instead to returning to Mexico.

Over the past three weeks, 45 families and 31 individuals -- approximately 200 people -- entered Canada at the Detroit River crossings and applied in Windsor for shelter and social assistance after filing refugee claims with the Canada Border Services Agency. Municipal agencies dealing with the sudden influx of mainly Mexican refugee applicants are renting out hotel rooms and bracing for predicted thousands more to come.

They are expecting thousands more in the coming months. There is a simple solution to this problem. Deny them entry into Canada. They will then be detained as they return to the US border and then shipped back to Mexico. Too heartless? How about speeding up the review process from the current 14 months of taxpayer-supported welfare before an application is rejected. Instead of giving the money away as aid, how about shifting it to employ more resources to quickly deal with the applicants.