Congressional Abuse of a General

OK, I was a sucker for listening to the two days of Congressional hearings on Iraq as our 'favorite' Congressmen grandstanded over the need to evacuate our troops out of Iraq A.S.A.P.

First, I am amazed at General Petraeus's seemingly unlimited ability to maintain Self Discipline. Clearly, this has been honed over years of service to our country.

Second, I found it pretty damn amusing that on both days, the Chairmen of the hearings had trouble controlling the spectator/protesters, who interrupted the hearings multiple times. If Congress cannot control their own hearing room, then it is understandable that the US might have a difficult time controlling all of Iraq, especially considering that terrorists in Iraq try to blend into the local population by not dressing in bright pink to make themselves easily identifiable as the misfits in the Congressional hearings did. Why Code Pink has not been banned from hearings entirely is a complete mystery to me.

Now the General has proposed a reduction in troops and the news is suggesting that the President will announce as reduction as well. The General also provided a draft timeline, as illustrated in the following slide he presented to Congress: 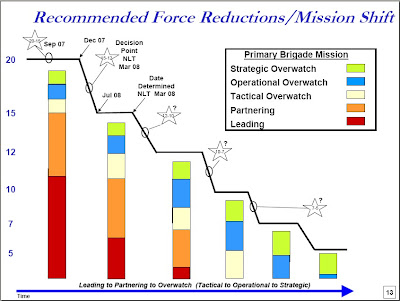 General Petraeus suggested a drawdown of troops up until July, 2008 which as it happens is the latest date mentioned in the timeline. However, by that date, the number of troops appear to be reduced by 25% and possibly more than that. Of note is how the mission the troops are performing changes over time. The graph also provide the template for the rest of the withdrawal. It is just missing the dates, which did not sit well with the Democrats at the hearings.

The Democrats, seemed to be working hard to blunt any mention of any sort of progress being made in Iraq. This was done mainly by highlighting previous failures and using the past as reasoning for getting out as well as failure to comply exactly with plans made up months ago. That is a shame since by recognizing the progress that General Petraeus is claiming, they can push for withdrawals based on the progress made and expected. That path however causes problem for those running for President. (see below)

Sunk costs:
Sunk cost has been a major theme in the Democrat's plan to surrender in Iraq. Basically, we were losing, so we need to pull out to be sure that we lose.

This is how Wikipedia explains 'Sunk Cost':

In economics and in business decision-making, sunk costs are costs that have already been incurred and which cannot be recovered to any significant degree. Sunk costs are sometimes contrasted with variable costs, which are the costs that will change due to the proposed course of action. In microeconomic theory, only variable costs are relevant to a decision. Economics proposes that a rational actor does not let sunk costs influence one's decisions, because doing so would not be assessing a decision exclusively on its own merits. - Wikipedia

So whenever you hear a Democrat discussing how we need to get out of Iraq because we have spent too much money there and that we has lost enough lives, that is an example of basing a decision on sunk costs. With that sort of reasoning, we never should have invaded Afghanistan since nothing we could have done would have brought back the lives lost on that day, nor given us back the twin Towers. They were simply sunk costs. Thankfully, President Bush, and the Congress at that time didn't see it that way.

The 2008 Presidential Election:
There is one sticking point about the July, 2008 date that none of the Congressmen mentioned during the hearings, in that the date is right in the middle of the 2008 Election campaign. That is a serious problem for Democrats. First, Bush, and whoever is campaigning on the Republican side, is surely to benefit from any troop withdraws announced in March 2008 to start in July 2008, especially if they are coming home, leaving a relatively peaceful Iraq. That is the other problem for Democrats in that as time goes on, there is less bloody news footage coming out of Iraq.

So there is the need for the Democrats to force a quick pullout from Iraq. If things continue to get better without troops there, they can claim the credit for having the foresight to do the pullout. If things don't get better, or get worse, they can claim that having the troops there would not have made the country any better, but would have resulted in more US lives lost. Even better, they can blame Bush for keeping the troops there for too long, which resulted in the country becoming dependant on our presence.

Then there is the issue of the moveon.org ad. The Democrats running for President only seem to be bothered by how best to not say anything that might upset moveon members. While Moveon has the right to print something like that in the paper, it is something that every member of Congress as well as everyone in the Government should condemn for the poison that it is.

Out of the whole hearing only one question seems to have great importance, that was of gauging Iran's sincerity at discussions in Iraq over the country's security. The answer was simply that they were to there to give the appearance to be helping, but in reality they were not interested at all in actually doing so. Good luck in having any of the Democrats push to hold Iran to account for its recent actions in Iraq, Syria or Lebanon.

What seems to be missing from the Democrat side as the simple fact in the rebuilding of Iraq and its Government, you just can't fill all the positions with just anybody. You need qualified people to do the jobs. A person becomes qualified to be an Iraqi General by working his way up the ranks. As General Petraeus stated, that is the problem as the lower ranks have a severe shortage of personnel due to a lack of qualified people prior to the US invading Iraq. So they are working quickly to get people the needed skills and experience to move up. The same goes for the rest of the Government positions, which were mostly non-functional under Saddam Hussein.

Now we could do this in a half-assed sort of way, but that is not how we are doing it. We are not trying to rebuld the Iraqi Army into a third-world militia. We are turning their forces into a first-rate professional, voluntary military. That is not small act. We are also trying to help the Iraqis build a first-world Government. That too takes time.

Time the Democrats don't want to give them. Because that will interfere with their goal of taking back the White House. That sounds like no plan to win an election.

Fussy Freddy: Be it a mystery no longer!

The reason that the US congress doesn’t ban US citizens from public hearings based on their organizational affiliations is indeed the same reason they don’t ban anyone: guidance from their own Parliamentary rules.

For the House, the rule reads:

Hearing attendees are only prohibited from bringing in signs, holding raised signs or otherwise being disruptive to the proceedings. If they are disruptive, then, as I am sure you have noticed, they are removed.

While suffering through other people's frivolous “rights of citizenship” is a massive burden for you, Fred, do take heart! Though laughably ineffectual, such antics gives the common folk a sense of what we Policy Wonks like to call “democracy.”

You perhaps know what that is: it’s that thing your knight-in-shinning-armor Monsieur Pertreaus is currently exporting to Iraq.

Just to be clear, I am not advocating the banning of Citizens from Capital Hill. I suggested that CODE PINK, a group that advocates disrupting Government, be banned. As you said, they are prohibited from bringing in signs, so it is not much of a stretch to declare their pink 'uniforms' 'signs' and ban the attire. They do not have the right to practice free speech in the hearing room. They do have the right to visit and sound off at all of these Congressmen by visiting their offices. I am in their offices often enough to know that they are in general pretty open.

Remember, their actions violate the rights of the rest of us. That means that they are wrong. they can go and protest most anywhere else in DC. I should know. I have way to many commutes home disrupted by idiots blockading roads 'in protest'.