Welcome to this weeks edition of Maritime Monday.
Lots to look at this week. The next week or two might be light as the due date for the baby approaches.

You can find Maritime Monday 7 here.

This Weeks Photo:
Frontline is "The world's largest tanker company"

Below is a picture of the OBO FRONT BREAKER. What is an OBO?

OBO - Ore-Bulk-Oil Carrier - As their name suggests, ore-bulk-oil carriers, also known as combination carriers, are designed to be capable of carrying wet or dry cargoes. The idea is to reduce the number of empty (ballast voyages, in which large ships only carry a cargo one way and return empty for another. These are a feature of the larger bulk trades (e.g. crude oil from the Middle East, iron ore and coal from Australia, South Africa and Brazil). In fact, combination carriers found themselves specialising in one trade or the other, and their flexibility went very much unused. Very few were built after the 1980s, and the idea has rather fallen out of fashion. The most famous OBO was the Derbyshire MV Derbyshire of 180,000 deadweight tonnes, which in September 1980 became the largest British ship ever lost at sea. It sank in a Pacific typhoon while carrying a cargo of iron ore from Sept Iles in Canada to Japan. - Wikipedia 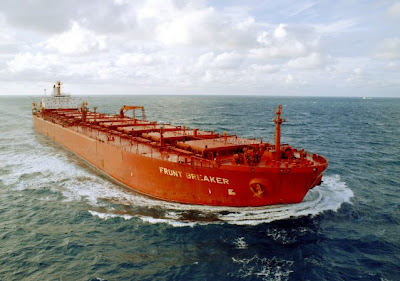 This Weeks Items:
Eagle Speak has Russia's detention/capture of two 'flag of convenience' vessels that happened to be caught in Russian waters. (The latest installment of his Sunday Ship History can be found here.)

Shipping Facts is a website created to provide information about the international shipping industry.

Here are two recent high-profile assignments for US Merchant Marine Academy alumni serving in the US Navy:

American Shipper has news of another delay for the TWIC Program. (Could see this coming a mile away.) See more TWIC info below.

Sailors, Mariners & Warriors League has the explosion of the MT MAULANA in Indonesia resulting in the deaths of four crewmembers.

Yankee Sailor has "Remembering the “Lost Veterans” of the Merchant Marine."

Tims Times (At Sea) posts about something most everyone who has sailed on a merchant ship can relate to: Paranoia (Think your job is stressful? Read this.)

The Pilot Boat has (At Sea) a photo and summary of transiting through the Suez Canal.

Kiwi at Sea (At Sea) is guarding anchors.

YouTube has a successful Coast Guard drug interdiction by the USCGC GALLATIN and a shooting helicopter. (It is unclear how old this video is.)

Cargo Law has a deadly boat accident on the cruise vessel M/V ASTORIA that took the life of Able-Body Seaman Pepito Flores including commentary by a crewmember that the davits were long-known to be in disrepair.

CDR Salamander has posted in his own series 'Fullbore Friday', the amazing WWI story of the German raider SMS EMDEN's exploits in the Indian Ocean.

The North American Maritime Ministry Association has the US Government's proscecutions against seafarers for lying about illegal discharges of oil at sea. (not for the discahrges themselves.) Seems like they need to hand out more copies of "BIMCO's guide to prepare for Port State Control Inspections in the U.S.A."

MarEx Newsletter has a suspicious photographer spotted at a US Port.

Dark Roasted Blend has photos and a summary of stealth ships.

The BBC has the return of Royal Navy cargo ship boarding operations in the Gulf.

Asia Times has "Flags that hide the dirty truth" and they don't mean Liberia or Panama.

The Discovery Channel has video from their series 'Deadliest Catch'.

CBC News has the belief that the massive stowaway search on the containership CALA PUEBLA in Halifax, Canada was nothing more than law-enforcement diversion setup by organized crime.

IMC Brokers has a photo of the Trailing Suction Hopper Dredger MARIEKE.

Blohm+Voss Repair in the Port of Hamburg, Germany has a number of webcams covering their yard. Here is an index view of all of them. 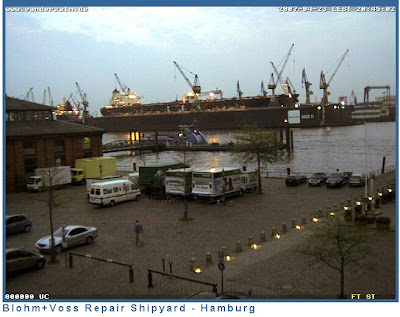 Somerville blasts EU ignorance - NEW YORK 25 April – American Bureau of Shipping chairman Bob Somerville warned yesterday that it is only a matter of time before one of the class societies is brought to its knees by unlimited liability for simple negligence. “That will be the death knell of all societies in the form that we know them today,” he told the annual meeting of ABS members at New York Yacht Club. The danger comes from the “bureaucratic halls” of the European Union where “there is a growing body of increasingly influential opinion that either does not understand class or, even more worryingly, believes that there is a commercial advantage to be gained if class is abolished,” he said. Somerville’s pessimism was occasioned by the Erika III package, and specifically the draft Directive on class which, he notes, takes no account of the improving safety record, or the improvement “to a statistically insignificant level” in the number of Port State detentions of ships for class-related deficiencies. “We continue to be judged by our very occasional failings,” he said, urging maritime safety practitioners to “provide support if rational legislation and regulation of this industry is to continue.” - Fairplay Homepage (Used with Permission)