Now that the full story behind the pay raise for Wolfowitz's girlfriend has come out on the internet, his critics within the World Bank are busy trying to pile more crap charges against him, through leaks, in an attempt to bury any chance of his keeping his job. The new complaint is the high cost of his protection:

Opponents have stepped up pressure by revealing that Mr Wolfowitz is costing the World Bank $5 million a year in personal security because he is such a prominent target for terrorists.
A senior bank source told The Sunday Telegraph: "It's a huge sum. We shouldn't have to be paying to protect him." A former senior employee added: "When his predecessor, Jim Wolfensohn, went on foreign trips, even to the Middle East, he was invariably met by the local country office driver, who would pick him up in a battered Volvo. Now, everywhere Wolfowitz goes he has to be accompanied by personal protection people."
Internal critics say that Mr Wolfowitz's appointment has endangered the security of other bank staff. The former employee said. "His mere presence puts other people at risk." - Telegraph UK

I personally like the comment that the mere fact that Mr. Wolfowitz has been appointed to the bank puts other bank employees at risk. If the Bank truly believes that, then maybe they should move their headquarters from around the corner from the White House.

The 'former employee' above is surely also familiar with the massive protests held each year around the World Bank during their annual meetings. How much are the World Bank's security costs for their annual meeting and who is paying for the large police presence? Now these protests have been going on well before Wolfowitz was president, and attendees are not being driven around in 'battered volvo's. they are moved about in police motorcades. (In the case of the World Bank's annual meetings, those meeting put the citizens of Washington, DC at risk from all the moonbats that come to protest their meetings. They are protected, but we are not.)
To put his $5 million security expense in perspective, the World Bank loaned over $14 billion last year and has over $100 billions in loans outstanding. So $5 million is a drop in their bucket. Surely, the employee rolls at the World Bank can be lightened of some deadwood to recover that amount.
I wonder what else those against Mr. Wolfowitz would be willing to disclose? How about the details of his security? These people have no shame. They are the ones who are damaging the image of the World Bank, not Mr. Wolfowitz.
Now the Wall Street journal managed to find a group that is for Mr. Wolfowitz; The Bank's own customers.

"I would say that Wolfowitz's performance over the last several years and his leadership on African issues should certainly feature prominently in the discussions . . . . In the Liberian case and the case of many forgotten post-conflict fragile countries, he has been a visionary. He has been absolutely supportive, responsive, there for us . . . . We think that he has done a lot to bring Africa in general . . . into the limelight and has certainly championed our cause over the last two years of his leadership, and we look forward to it continuing."
The deputy prime minister for Mauritius, Rama Krishna Sithanen, then piped in that "he has been supportive of reforms in our country . . . . We think that he has done a good job. More specifically, he has apologized for what has happened." - Opinion Journal

So it sounds like Mr. Wolfowitz is appreciated by the people that matters. Hopefully, he will continue to help those who need the World Bank most.

See more on this issue at EU Referendum

- - - - - - -
Oh yes, despite the comment by the former senior World Bank employee that the former World Bank President Wolfensohn was able to roam around freely without security, do note that he was attacked in Helsinki, Finland. Sure it was only a pie (Actually two pies.) But if you can get a whole pie to a target like this, then you can also get something much more dangerous there as well. So how about sending the pie man in the picture a bill for $5 million. 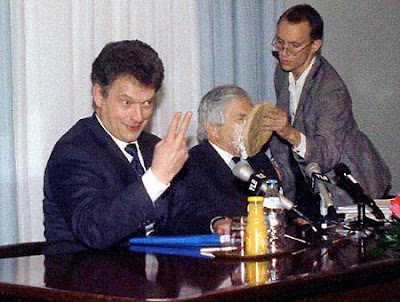 The President of the World Bank James D. Wolfensohn became the first high-profile victim of a public cream-pie attack on Finnish soil on Thursday, when he was smeared twice just before a press conference held with Finnish Finance Minister Sauli Niinistö. - Helsingin Sanomat, 2001

Clearly, some security would have been appreciated.

Previous Post on this subject:
The Shameless Framing of Wolfowitz - FFI 26 April 2007
Posted by Fred Fry at Sunday, April 29, 2007