National Geographic does a photo of the day here. This is the 24 March photo: 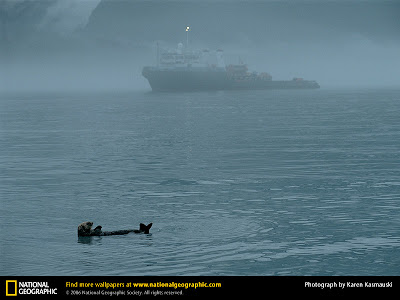 Eagle Speak has Another View of Port Security by some of those who depend on ports.

Eagle Speak also has an edition of his 'Sunday Ship History' dedicated to Liberty Ships. (You can catch up on the series here. Yesterday the USS LIBERTY was covered, including Israel's strike on the vessel during the Six Day War.) 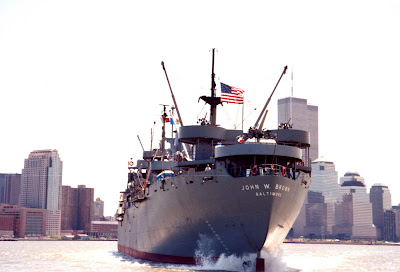 Sailors, Mariners & Warriors League wonders "How Easy (Or Hard) Is It To Fall Overboard On A Ship?"

The UK Ministry of defence's 'Defence News' documents that the Iranians ventured into Iraqi Territory to seize the UK sailors and Marines, in effect violating Iraq's sovereignty, while claiming the reverse was true. (Not that there was any doubt of this.) Clearly, Iran targeted these sailors. The question is, what, if anything will the UK do the next time Iranian Forces sail into Iraqi waters?

EU Referendum has more details on the UK sailor kidnapping by Iran, mentioning that the US might have been asked to assist (this was a coalition Operation) but that it was already too late.

The Yankee Sailor covers what should have been seen a nautical mile away with the rapidly shrinking Royal Navy; News that there will be no officer promotions for the next five years. Understandably, the fleet is not happy.

The Boston Herald has the kidnap of a British oil worker by gunmen in Nigeria as the total of foreigners kidnapped this year approaches 50.

On vacation, Tim at Tims Times does what many merchant sailors do on vacation; He goes to firefighting school. (Yes, you train during your 'off-time'.) 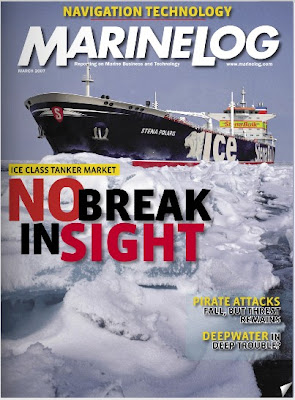 GreenPeace's Ocean Waves Blog has their agent's refusal to help clear their vessel ESPERANZA to enter the Port of Tokyo.

Fogonazos has photos of one of the largest ship graveyards in the world, in Mauritania.

Canada's Ambassador for Fisheries Conservation is off to Europe to explain to them that their "Seal Hunt Is Humane and Sustainable."

The International Herald Tribune has the Japanese arrest of a Chinese Captain, Liu Mingguo, for violating Japan's sanctions against North Korea for attempting to deliver 55 tons of Clams. (As mentioned here last week.)

Mata Star.com has the story of the Bulgarian ship M/V SMOLYAN, bound for Libya, stranded in Malta. This is as a result of Libya's sham sentencing of five Bulgarian Nurses to death for the HIV infections of 400 children. All direct trade between the two nations has been grinding to a halt since the trial.

UPI has the other Iranian hostage story of German Donald Klein, who was just released from serving 15 months in an Iranian prison. He was accused of fishing in Iranian waters. The French skipper Stephane Lherbier was released earlier this year. (See my post on this item.)

"Germany has on repeated occasions tried to free Klein, with German President Horst Koehler intervening unsuccessfully. Iranian diplomats have recently hinted that a release of an Iranian agent in German custody would help Klein's case.

However, it is unclear whether Berlin has accepted that deal; observers say such a move is highly unlikely." - UPI

The Ledger.com has the intentional grounding of the Panama-Flag ANTILES II, as ordered by the Harbor Pilot in response to the vessel losing its main engine as it approached the Tampa Skyway Bridge. (The old Skyway bridge was hit in 1980 resulting in a number of deaths.)

shipping Times (UK) has the launch of the car carrier HOEGH BANGKOK at Croatia's Uljanik shipyard.

Macsmind has the Natural Resources Defense Council's FIFTH lawsuit against the US Navy's use of Sonar.

The Stamford Advocate has an article on the alternative to sailing on a cruise ship by sailing as a passenger on a containership, with one cruiser calling it the "un-cruise".

The Sydney Morning Herald has sailing on cargo vessels as a green alternative to flying. (If you are really concerned about this, then why on earth are you taking a ten-month adventure around the globe? Sure, YOU might conserve a little for the environment, but there is not room enough for more than a handful of passengers each year, so what is really happening is that some seats on the planes are going unused.)

Break.com has video of the cruise ship VOYAGER caught in a cyclone in the Med in 2005.

Canada – QUEEN OF THE NORTH – BC Ferries investigation - BC Ferries released its Divisional Inquiry into the sinking of the ferry QUEEN OF THE NORTH. The ferry sank, with the loss of two lives, on March 22, 2006, after grounding off Gil Island. The 28-page internal investigation reveals that no alterations of speed or course were made during the ship’s transit of Wright Sound until the ship impacted Gil Island at the end of the Sound at a speed of 17.5 knots. Poor watchkeeping was found to be the primary cause of the casualty. The investigation was impeded by the refusal of some crewmembers to participate in the inquiry. BC Ferries also released the Attachments, consisting of 77 pages. (3/26/07). - Dennis Bryant Holland & Knight homepage (Used with Permission)

The Monitor also has comments on the QUEEN OF THE NORTH sinking.

Princess mum on 'double dip' - GULF OF MEXICO - 27 March – Princess Cruises knows why two passengers fell overboard from the Grand Princess early on Sunday morning, but it’s not telling. According to a statement by Princess, “At the request of both passengers, we are not providing any information about the circumstances of the highly unusual incident. We have concluded that their going overboard was an accident, and we consider the matter closed.” Furthermore, a US Coast Guard source told Fairplay today that there will be no investigation, because the ship is Bermuda-flagged and the incident occurred in international waters. The Grand Princess was en route from Galveston to Cozumel when an unidentified 20-year-old woman and 22-year-old man fell from a balcony at around 0130 on Sunday. They were rescued by Princess search boats at around 0530, with a USCG helicopter aiding the search. The woman was found first and the man was subsequently spotted by the USCG copter, which kept a search light on him to aid Princess search boats; according to the USCG source, the male passenger was naked when rescued. Princess said the male was treated in the ship’s medical facilities and is continuing his cruise vacation, while the woman disembarked in Costa Maya to “undergo further precautionary testing at a local hospital before travelling home”. - Fairplay Homepage (Used with Permission)