Take a look at this cover photo from the September 18, 2006 edition of the Finnish business newspaper Kauppalehti. 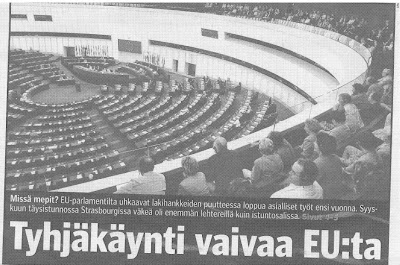 What an odd photo. Parliament appears to be in session, but where are the members of Parliament? (Apologies for the quality. Click to enlarge.)

For those who are not aware, the European Parliament is located most of the time in Brussels, Belgium. However, an EU Agreement (the Treaty of Amsterdam) puts the 'seat' at Strasbourg and requires it to meet there twelve times a year. That is fine, as long as you're not a Member of Parliament who gets bounced around from one location to the other each month, like a cat toy.

So you can image that many of the Members of Parliament are not happy, and the empty seats in the photo show it.

MEPs from all over Europe have today called for an end to the needless cost and waste of having two official seats for the European Parliament.

Few Euro-MPs deny the historic significance of Strasbourg - a city that embodies the spirit of European reconciliation - but many now believe that the waste and expense involved in monthly trips from Brussels to the French city can no longer be justified. They argue that the parliament should give up wandering and make Brussels its permanent home.

The 500 mile round-trip journey represents a huge cost to the European taxpayer. Twelve times a year, 732 MEPs with 2000 assistants and many hundreds more parliament staff take to the road from Brussels to Strasbourg. They are followed by huge lorries that carry 3500 trunks packed full of folders and papers necessary for a week's work. [Note: Can't they put all those documents on an Intranet?] The costs total more than 200 million Euros per year (£140 million). - 22 Feb 2005 - Baroness Sarah Ludford, MEP

Just imagine the contribution to Global warming this monthly trip needlessly contributes too.

There is an organized effort to change the situation, but since it requires all EU Members to approve, it is very likely that the Strasbourg Parliament will have a long future.

Here are some facts and figures from the One Seat Initiative:

European Green Members of Parliament are calling for the end of the traveling to Strasbourg, in the name of being green:

The Green Party, which commissioned the study, says the carbon cost is equal to 4,000 households in London.

The monthly trek is often referred to as the "travelling circus".- BBC