This Weeks Photos:
This is the SSCV THIALF. SSCV stands for Semi-Submersible Crane Vessel.

The SSCV Thialf is a Semi-Submersible Crane Vessel. It was constructed in 1985 as DB-102 for McDermott by Mitsui Engineering & Shipbuilding Co., Ltd.. In 1997 it was taken over by Heerema after discontinuation of their joint venture with McDermott, HeereMac.

The Thialf has two cranes with a maximum lifting capacity of 14,200 metric tons, making it the largest crane vessel in the world. It is equipped with a class III Dynamic Positioning system for position keeping in deep waters. For position keeping, the Thialf is fitted with six 5,500 kW retractable azimuthing thrusters. For shallow waters there are 12 Flipper Delta anchors, 22.5 t, with 2,500 meter, 80 mm mooring wire.

The hull consists of two floaters with four columns each. Transit draught is ± 12 meters. For lifting operations it will normally be ballasted down to 26.6 meters. This way the floaters (with a draught of 13.6 meters) are well submerged to reduce the effect of waves and swell. It is able to accommodate 742 persons. - Wikipedia 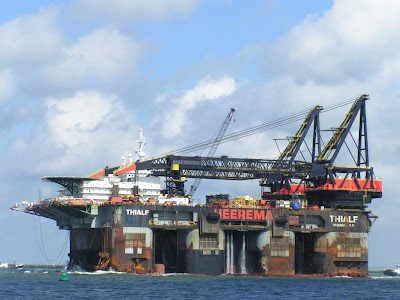 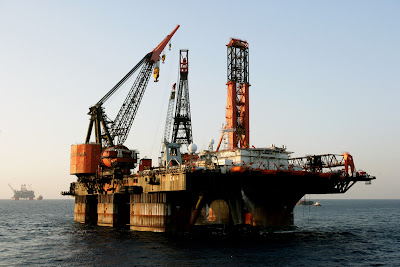 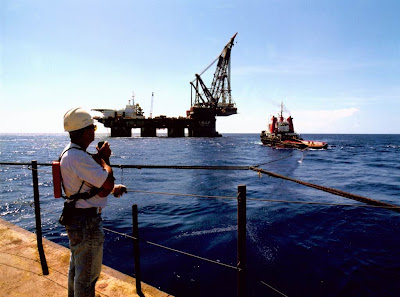 Heerema Marine Contractors is the owner of the THIALF. Home page is here. Photos are from their multimedia page.

Congratulations to (now) Captain Tim at Tims Times for obtaining his Master's License!

Eagle Speak also points to Steeljaw Scribe who remembers the 65th Anniversary of the Doolittle Raid on Japan.

Sailors, Mariners & Warriors League has the planning for the world's largest cruiseship, the PRINCESS KAGUYA, which would be twice as large as the current 'world's largest' titleholder, the FREEDOM OF THE SEAS.

YouTube has an assortment of videos of the SEA DIAMOND sinking.

China Economic Review has COSCO's intent to order 66 ships to add to it's fleet of 740.

Only In Philippines has the first order for a container ship to be built in the Philippines.

Cargo Law has a presentation to the European Parliament on the MSC NAPOLI loss.

Navy Newsstand has filming of the Stargate SG1 movie on the submarine USS ALEXANDRIA up in the Arctic.

Kiwi at Sea is packing his seabag.

The April Digital edition of Marine Log is posted on the net. Click the image to open the magazine: 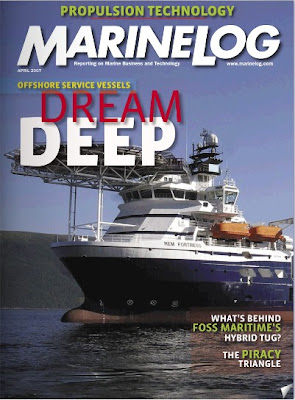 The BBC has the discovery of a 'Ghost Ship' (yacht) off Australia.

Not knowing what is in each imported container is not the only problem. The Boston Globe has the export of stolen US Registered cars out of Montreal, to Africa. (Tip: Get a Canadian rental.)

Boating Spectator has the development of an autonomous mooring buoy system.

Marine Commerce has a daily recap of Maritime sector performance in the stock market. (Among other things.)

Rigzone has the wounding of six oil workers in Nigeria after the workboat they were riding was attacked by gunmen.

Blackpool Today has expansion at the Fleetwood Offshore Survival Centre.

The Age (Australia) has China confronting the problems of rivers running dry.

Professional Mariner has coverage of training programs to counter the shortage of mates for Tugboats.

BoingBoing has an island off Machiasport, Maine offered for sale on eBay.

TWIC hearing - The Senate Committee on Commerce, Science, and Transportation conducted a hearing on implementation of the Transportation Worker Identification Credential (TWIC) program. Chairman Inouye (D-HI) expressed concern about the extended delays in activation of the program. Vice-Chairman Stevens (R-AK) stated that congressional tolerance for further missed deadlines is waning. Mr. Kip Hawley, Administrator, Transportation Security Administration (TSA), provided an update on the TWIC program. He stated that TWIC enrollment will begin at select ports and will proceed throughout the nation over the next 18-24 months. RADM Brian Salerno, USCG discussed the Coast Guard’s efforts in the TWIC program. Mr. Norman J. Rabkin, Government Accountability Office (GAO), discussed the progress made and the challenges remaining for the TWIC program. Ms. Lisa B. Himber, Maritime Exchange for the Delaware River and Bay, discussed the importance of adequate testing prior to full implementation of the TWIC program. She pointed out that there are still a number of unresolved issues. Mr. Paul Kaipo Pomaikai, Sr., Sause Brothers, discussed the barriers to entry posed by the TWIC rulemaking and the negligible security enhancement of having a TWIC card reader on every small commercial vessel. Mr. Michael Rodriquez, International Organization of Masters, Mates, and Pilots, recommended that the TWIC card be made compatible with the proven biometric technology developed by the International Civil Aviation Organization (ICAO), rather than adopting a unique and overly-complex system. (4/12/07). - Dennis Bryant Holland & Knight homepage (Used with Permission)

ICAO has approved one biometric for use on travel documents. That is facial recognition. He was referring to fingerprint biometrics, as intended to be used on the ILO's Seafarer Identity Document standard. The standards for the biometric are actually unique to that document, as at the time, the standard had not been finalized. The ILO just went with a draft of the standard.

Piracy attacks lowest in 10 years - SINGAPORE - 17 April – Reported piracy incidents in Southeast Asia have fallen to the lowest level for 10 years, according to a Singapore research report. Just 12 “armed robbery and piracy incidents” have been reported in Southeast Asia in the first three months of 2007, a drop of 50%, said Jane Chan and Joshua Ho, researchers attached to the Maritime Security Programme at the S Rajaratnam School of International Studies, a Graduate School of Nanyang Technological University, Singapore. “Increased vigilance by authorities has played a major role in cutting down piracy,” Chan told Fairplay. Indonesian ports and anchorages remained the regional hot spots while only three incidents were recorded in the Strait of Malacca. None of the attacks resulted in injuries to crew and were mostly “small scale” operations. The researchers have drawn from incidents compiled by the International Maritime Bureau and local press reports. The news comes as Malaysia is reviving talk of an oil pipeline from the Middle East to northern Malaysia to beat piracy attacks on tankers by avoiding the Malacca strait. - Fairplay Homepage (Used with Permission)