Did Speaker Pelosi Review Classified Material on Syria Prior to her Trip?

So Speaker Pelosi goes off to Syria to offer her own version of Foreign Policy despite objections from the White House, which is the only Branch of Government authorized to conduct Foreign Policy. (OK, the House of Representatives has the power to declare war.)

Clearly, Syria is a bad player in the Middle East. Even the Washington Post calls Syria's President Assad "a corrupt thug". Recently, Syria is responsible for the instability in Lebanon, and provided assistance and shelter to Saddam Hussein's Regime during the post Gulf-War sanctions and as they fled during Gulf-War, Part II. Then there is their long history of supporting terrorists. 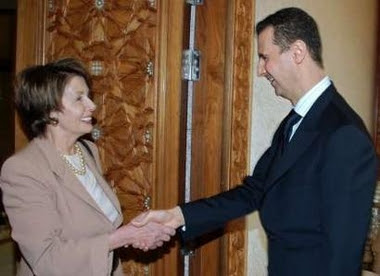 Now there is plenty of information available in the public domain about Syria, it's leadership, and their support of terror groups Hezbollah, Hamas, and others.

Now don't take my word for it, check the facts for yourself. For starters, here is a part of the State Department's background note on Syria:

Syria has been on the U.S. list of state sponsors of terrorism since the list's inception in 1979. Because of its continuing support and safe haven for terrorist organizations, Syria is subject to legislatively mandated penalties, including export sanctions and ineligibility to receive most forms of U.S. aid or to purchase U.S. military equipment. In 1986, the U.S. withdrew its ambassador and imposed additional administrative sanctions on Syria in response to evidence of direct Syrian involvement in an attempt to blow up an Israeli airplane. A U.S. ambassador returned to Damascus in 1987, partially in response to positive Syrian actions against terrorism such as expelling the Abu Nidal Organization from Syria and helping free an American hostage earlier that year.

However, relations since the February 2005 assassination of former Lebanese Prime Minister Hariri have considerably deteriorated. Issues of U.S. concern include the Syrian government’s failure to prevent Syria from becoming a major transit point for foreign fighters entering Iraq, its refusal to deport from Syria former Saddam regime elements who are supporting the insurgency in Iraq, its ongoing interference in Lebanese affairs, its protection of the leadership of Palestinian rejectionist groups in Damascus, its deplorable human rights record, and its pursuit of weapons of mass destruction. In May 2004, the Bush administration, pursuant to the provisions of the Syrian Accountability and Lebanese Sovereignty Restoration Act, imposed sanctions on Syria which banned nearly all exports to Syria except food and medicine. In February 2005, in the wake of the Hariri assassination, the U.S. recalled its Ambassador to Washington.

On 12 September, 2006 the U.S. embassy was attacked by four armed assailants with guns, grenades and a car bomb (which failed to detonate). Syrian Security Forces successfully countered the attack, killing three of the attackers and seriously wounding a fourth in front of the Embassy. The Syrian government publicly stated the attack was a terrorist attack. Given the lack of a formal channel to cooperate on security, the USG has not received an official Syrian Government assessment of the motives or organization behind the attack, but security was upgraded at U.S. facilities. Both the Syrian ambassador to the US, Imad Mushtapha, and president Bashar Asad, however, blamed US foreign policy in the region as contributing to the incident. - US Department of State

I would like to think that Speaker Pelosi was at least given the opportunity to read this. If not, then surely her staff must have. Makes you wonder what they discussed after reading it. After all, Syria does not come out smelling like roses, and this was written by a part of the Government that is not friendly to President Bush and is certainly more open to the idea of What Speaker Pelosi intended. Makes you wonder why they still bothered to visit Syria after reading this. Clearly little good could have come from her visit.

Worse, (if) Syria is meddling in Iraq and Lebanon to the point of assisting in the attacks on US Troops, visits like this do nothing to end the attacks. They only encourage them to attack more, simply because the visit confirms that they are making an impact. After all, the visit is in a way asking them to stop the violence. But why should they? The point is to get the US to quit Iraq and we won't do that if the violence stops.

Anyway, this Public Information is nothing compared to the Classified Information that is available to Speaker Pelosi. Since the goal of the trip was to get Syria onboard as part of stabilizing Iraq, I wonder if she bothered to read the Classified Reports on where Syria fits into Iraq's instability.

If she hasn't reviewed the Classified Information then I too think she should resign. It is her duty to do to review that information, especially when she decides to act as she did. Bloggers surely are willing to review the information, but we have not been the ones entrusted with it. She has. Now President Bush might be labeled as the Cowboy President, but it is Speaker Pelosi who is acting like one.