I have been covering the housing bubble in McLean, VA through covering one house located on Great Falls Street. It has been over a year and the house remains unsold. (The last post on that house can be found here.) The house has not been listed in the MLS for months, but remains unsold.
There is a similar-sized house two doors down also for sale, but about $100,000 cheaper since they reduced the price in February. Also, on the corner of the same block is a house that has been for sale for a month or so. The price was reduced once already after the first weekend's open house and now, it is scheduled to be auctioned this Sunday. 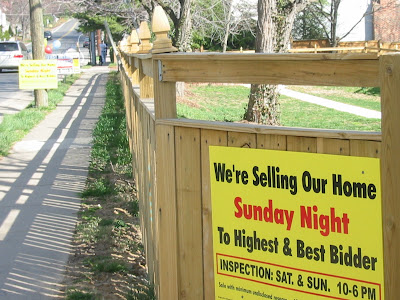 Don't be fooled by the sign. The owners never lived in this 'home'. They bought it a couple of months ago and after doing a quick renovation, are now trying to flip it. I am sure that it does not help having the house next to it up for sale, for less. In fact, the neighbor appears to have reduced their price in response to the auction being held next door. Those familiar with the area will agree that an auction in this area has been until now unheard of.
To their credit, it seems that for good or bad, they are very motivated to exit this property. Lets see if they accept an offer, if anyone bothers to give one.
Posted by Fred Fry at Sunday, April 01, 2007