Speaker Pelosi arrives in Syria with a nice scarf. 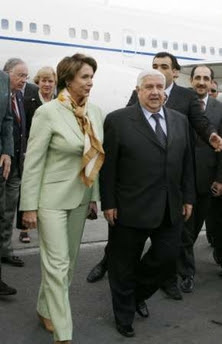 Which can handily 'convert' into an Islam-complaint head covering.

You are looking at the main reason why Syria was looking forward to Speaker Pelosi's Trip: 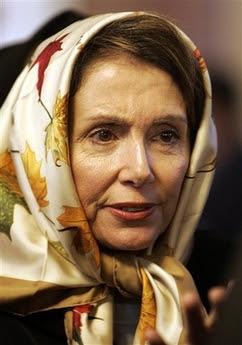 She could have taken a stand for women's rights and stood as an example for all women, but opted to sacrifice her own rights, as to not upset Islam or her guests. It should not have been a problem since Syria has signed the UN's "Convention on the Elimination of All Forms of Discrimination against Women New York, 18 December 1979". Then again, 'All Forms of Discrimintation' does not always mean what the UN had intended:

Pretty handy that Sharia Law. Equal Rights for women as long as it does not conflict with Islam, which essentially exempts the entire Muslim World from this UN Convention. Yet they get to sign it so that the UN can claim it a success.

Now I am advocating that Speaker Pelosi go into a Mosque uncovered if they object to that. More so that she should have explained upfront that she was not wearing a head-covering and that her tour around Damascus should be arranged with that in mind. Better yet, she should have refused to visit Syria as they fail to protect the equal rights of women. How about forcing Assad to visit her in Washington instead.

To tell you the truth, I am surprised that she did this. It all too easily opens her to attacks, like this one.

Photographer Jamal Saidi calls it as he sees it. Pelosi is wearing a veil. 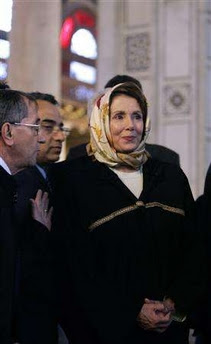 This is how the rest of the Muslim world will see it. It would be useful for Speaker Pelosi to explain how this is going to help in the fight against terro.

One piece of advice, next time, skip the tour of the mosque, or leave it to the men to tour it.

I've included this post in my roundup of this story.
http://amboytimes.typepad.com/the_amboy_times/2007/04/pelosi_seeks_po.html

It wasn't so long ago that all women had to don a chapel veil to enter a Catholic church. And men had to take off their headwear. Do you really think that the tens of millions of Americans who followed those rules were closet jihadists?

How many women were killed for failing to wear a veil in a Catholic Church?

You do understand that Western Women are being raped in Scandinavia (Norway and Sweden) by Muslim men who are using the fact that they were not wearing a head covering as an excuse why it was permitted to rape them.

Then there is the case of the Iman in Australia declaring unveiled women as 'uncovered meat' in respect as to why muslim men attack them. A lack of a veil has even been used in court in western countries as a defense against rape charges.

I suggest you investigate the issue a little further. This is much bigger than simply covering up when entering a church/mosque. Even if you want to say this is an issue of respecting other beliefs, there is an utter failure on their part to respect Western beliefs/values.

As for wearing the veil, why did she discount their religion by not wearing a burka?

My point is that she should not have gone into the mosque to avoid the photo op/ propaganda material.

And no, they are not respecting other's beliefs. Take all those clerks refusing to scan bacon products. It is not that they are afraid of touching the package. It is because they are not going to assist you in breaking their rules. (Although that is a weak excuse since they then take the customer's money, allowing the purchase.)

How strange that all the comments above were made from people in the US.

How many of you have even been to a Muslim country?

Here are two photos of Laura Bush wearing an even more concealing veil:

Does this mean Laura also sacrificed her rights and stood as a poor example for women?

"Does this mean Laura also sacrificed her rights and stood as a poor example for women?"

In the case of the mosque visit, yes.

As I mention in the post, Syria has failed to comply with the UN Convention to eliminate all forms of descrimination against women.

This includes all forms of religious descrimination against women.

No one forced Syria to sign. But since they have, they should be forced to comply.

Thanks for the links to the photos. Very interesting. Surely, they must be from yet another failed attempt to get the Syrians to listen. Maybe these meetings are nothing more than an excuse to visit as tourists.

OK, so Laura Bush was visiting Israel in those photos, not Syria.

Keep in mind one very important point, Laura Bush was not on some trip as a negotiator for the Government, like Speaker Pelosi.

She was also not visiting a State Sponsor of Terrorism, like Speaker Pelosi.

As for Speaker Pelosi, if she wants to fit the profile that Muslim men have for women like her, that is her problem, except when she is representing the US.

Take a look at the Pelosi photographs in the Mosque. Except for one photo, she is the only woman.

I know I'm beyond late on this, but I thought I'd add that you're an idiot.
I've been to islamic countries, and when visiting the mosques I've covered my shoulders (though not always hair) as requested.
After waiting in line for 30 minutes to enter St Peter's in Vatican City, I wasn't allowed to enter for wearing a knee length skirt... out of all the things to get upset about islamic culture, this isn't one of them.

Who is the bigger idiot, me or Mrs. Pelosi, who happened to visit Syria claiming that they were a partner in peace, who actually used her (and other Democrats like John Kerry) as a shield for their secret nuclear project.

Pelosi, Kerry and other Democrats PWNED by Syria

I too have been to Islamic countries. Their treatment of women is outrageous. You seem to miss that point made in this post: They agreed in a UN Convention to treat women equally and then do not. The WOMAN Speaker of the US House should also be willing to be an example for woman's rights in the rest of the world. That is an opportunity she has wasted, mostly for selfish political goals.

Look, I came across this website searching for "white house tour reservations nancy pelosi" (for an upcoming D.C. visit). She is my congressperson, and for you, that should be enough to know my political viewpoint is very different than yours. That Syria should sign a convention and not honor it just isn't a Walter Kronkite moment for me. If you really think we have time to get excited about these unfortunate facts of life, I think you live in a different and nicer world than me. Anyway, sending me to another article of yours as a means of making your argument is pointless.
You equate "discussion" with "negotiation" and I stop reading there as that's enough for me to understand what you have to say. Pelosi went to Syria because we have some very serious issues in the region, and I for one agree that we have some political cards to play with them. They are overwhelmed with Iraqi refugees and no doubt share some basic goals for Iraq with us. You're never going to convince me that refusing to talk to them, regardless of how bad they are, is the right approach. This kind of ignorance is what led an administration hell-bent on an invasion to have such a poor understanding of how to manage the situation when they got there.
Unfortunately, the world is not a black and white place like you would wish it to be. Respecting the traditions of a cultural institution by covering up in a mosque isn't appeasing islamic fundamentalism any more than donning liederhosen for oktoberfest is a sign of sympathy for nazism.
And the nuclear enrichment shield thing... Hilarious.
Now, I'll be the first to criticize the left in some of their more idealistic pursuits, but it's a disparate movement with zero traction in the mainstream. The depressing thing about conservatism these days is that they've been able to distill their messages down for a large group of angry people who are happy to regurgitate a bunch of soundbytes and display absolutely no understanding of what they're supposedly fighting against.
I sincerely wish that the conservative blogosphere would stop taking their cues from Rush Limbaugh and that the political dialog in this country could return to more intellectually honest discussions.