This Weeks Photos:
Here are some photos of the M/T TEMPERA, which is an oil tanker that has the ability to travel through ice without the need for an icebreaker escort.

The 105,000 dwt M/T Tempera, built in Japan for Fortum Shipping, which has now arrived to its home waters for the first time, as well as M/T Mastera that will be completed later, are the first cargo ships of this double-acting type in the world. In open water, they can reach a speed of 17 knots, and thanks to their efficient icebreaking capacity that can be achieved while running with stern first, they are entitled to the highest IA Super Ice Class with their engine power of 16 MW. Using conventional technology they would require as much as 25 MW. These vessels are able to navigate independently in the Baltic Sea area. - Marine Link, November, 2002

Click on the link above to read about the vessel's Azipod Propulsion system. 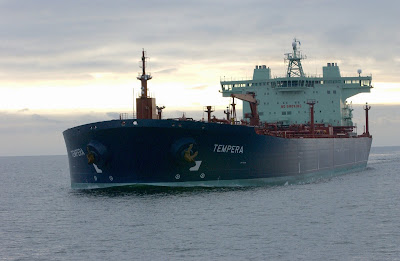 (Bow-first. Notice the shape of the bow.) 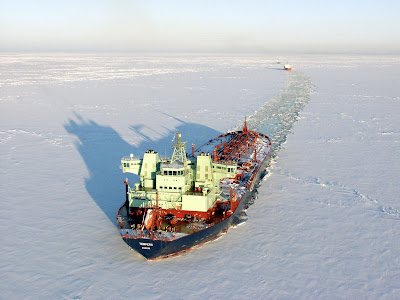 The images can be found at Neste Oil, here.

Millard Fillmore's Bathtub has the 60th anniversary of the Texas City disaster when ammonium nitrate fertilizer cargo on the SS GRANDCHAMP and then the SS HIGH FLYER exploded causing the worst industrial accident in the US, resulting in the deaths of hundreds.

Sailors, Mariners & Warriors League has the fire and abandon ship of the Argentine-Flag icebreaker ALMIRANTE IRIZAR.

Lawhawk at A Blog For All has the WWII Aircraft Carrier USS ENTERPRISE entering drydock for the first time in nearly 40 years.

Alaska Report has questions over why some beaches still have oil from the EXXON VALDEZ spill that happened 18 years ago.

The Space Review has a critical look at the EU's Galileo satellite Navigation System, knocking the 'official' reasons brought forward for building it. (And points out the similarities to the (initially) failed Iridium Satellite Communication System.)

RigZone has the discovery of oil off the coast of Vietnam.

American Shipper has the promise that the Port of New York and New Jersey will be one of the ports to test TWIC readers. There is no mention if these card readers will also be checking the card-holder's biometrics. (I hope this is not true. You test in small ports and deploy in big ones. Anyway, rule #1, never be a guinea pig!)

Julie has a great photo album with commentary of the accident and her evacuation of the SEA DIAMOND in Santorini. (Be sure to click through them.) 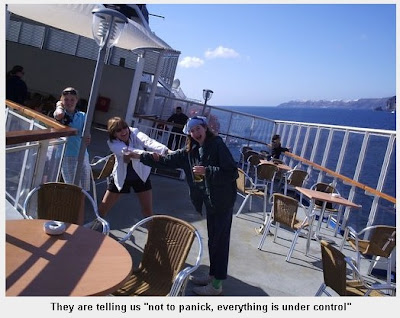 Cruise Bruise has the nightmare of cruise vessel calls on the small town of Bar Harbor, Maine.

The International Herald Tribune has the start of construction on the world's largest LNG Carrier at Samsung Heavy Industries in Korea.

National Geographic has as 'photo of the day' for 9 April: "Arctic Ocean, Northwest Territories, Canada, 1983 - Photograph by Emory Kristof"

PilotOnline.com has serious problems for the US Navy's new amphibious ship SAN ANTONIO.

The Blog of Big Boss Lee has the US Postal Service ending the international shipment of mail, by sea and the substantial impact on US-based booksellers.

Helsingin Sanomat has the secret collision in 1963 of the Soviet Nuclear Submarine K-33 and the freighter FINNCLIPPER, only being made public now. (Dear Finland, what other secrets might you be holding about one of the worst regimes to ever see the light of day?)

Hundreds of Fathoms has Submarine Crew Retention Problems for Australia.

The Japan Times has the extension of Japanese Sanctions including a ban on port calls for North Korean Vessels for another 6 months.

Japan Probe has Japan's spending of hundreds of millions of dollars to keep islands above the waves, in order to protect territorial claims.

The Stupid Shall be Punished has Diego Garcia: "A Crappy Place To Do A Crew Swap", for submarines. (I would think that having all those ships concentrated there would be of interest to other navy's submarines, making the waters off Diego prime hunting grounds. Swapping out there would give more time to hunt them, which I would think is the fun part.)

The European Commission has the new Fisheries Partnership Agreement with the Ivory Coast, noting "an overall reduction in fishing possibilities."

Think sinking is the only danger faced on a cruise ship? The Arizona Daily Star has a warning concerning onboard 'art' auctions.

Ships & The Sea has a scheduled drydocking for THE WORLD, an Apartment Cruise Liner, at the Lisnave shipyard at Setubal.

Freaque Waves has a lighthouse keeper's account of a freak wave at the Mucle Flugga Lighthouse in Scotland.

JT's Gallery has photos of the CAP MELVILLE.

Sinking of the TITANIC - On April 15, 1912, the British luxury liner RMS TITANIC sank in the North Atlantic off Newfoundland, Canada, less than three hours after striking an iceberg. Approximately 1,500 people died. The sinking led to establishment of the International Ice Patrol (operated by the US Coast Guard), to the Safety of Life at Sea (SOLAS) Convention, and to requirements for radio communications on ships. (4/15/06). - Dennis Bryant Holland & Knight homepage (Used with Permission)

Australian queues hit headlines - BRISBANE 11 April – The huge queues of coal carriers off Australia's east coast today attracted national media attention and renewed calls for the federal government to take control of the nation's ports. Local news indicated that 153 bulk carriers were waiting to load off New South Wales and Queensland coal ports. A total of 71 vessels were waiting to load at Newcastle alone late today. Prime minister John Howard blamed the port bottlenecks on the strength of Australia's commodity exports. He said that co-operation between the federal government and the individual states was preferable, "but if co-operation doesn't work we have to look at some alternative.” A meeting between the state and federal governments on Friday is reportedly due to discuss the issue of a single national regulator for the country's ports. Mining companies have complained bitterly about the demurrage they are paying, although some experts claim they are largely to blame for over-ordering ships. However, federal transport minister Mark Vaile today accused the state governments for failing to invest in port infrastructure to ensure they keep pace with the minerals boom. - Fairplay Homepage (Used with Permission)

Sea Diamond rescue plan 'overruled' - SANTORINI 12 April – Louis Hellenic Cruises, owner of the cruise ship Sea Diamond which sank off the Greek island of Santorini on 5 April, claimed yesterday that the ship could have been saved if the master had been allowed to implement the company's rescue plan. Speaking at a press conference, Louis superintendent George Koubenas revealed that Capt Yannis Marinos had been instructed to secure the vessel at a nearby floating dock as soon as the last passenger had disembarked. "But the ship was towed to the place where it sank contrary to the master's orders," he asserted. Koubenas did not name the authority that decided on the ship's final move, saying the investigation of the accident will reveal that. Vital evidence in this respect, he said, was the ship's voyage data recorder, which now lies inside the wreck at a depth of 120m. "The last crew team on board the sinking vessel was instructed to retrieve the VDR before disembarking, but at the time that was beyond their reach," he said. A Louis announcement to the Cyprus Stock Exchange says the company's financial results will not be affected by the loss of the Sea Diamond. The ship's itineraries have been taken up by the Cyprus-flagged Thomson Spirit. - Fairplay Homepage (Used with Permission)