The Shameless Framing of Wolfowitz

I have to admit, when I first saw the headlines on Mr. Paul Wolfowitz, I too came to the conclusion that he should resign immediately. I thought that the issue was so clear-cut from the title, that I never bothered to actually read any of the stories, until I read "The Wolfowitz Files" posted on the Wall Street Journal's Opinion Journal editorial page:

Based on this paper trail, Mr. Wolfowitz's only real mistake was in assuming that everyone else was acting in good faith. Yet when some of these details leaked to the media, nearly everyone else at the bank dodged responsibility and let Mr. Wolfowitz twist in the wind. Mr. Melkert, a Dutch politician now at the U.N., seems to have played an especially cowardly role.

In an October 24, 2005 letter to Mr. Wolfowitz, he averred that "because the outcome is consistent with the Committee's findings and advice above, the Committee concurs with your view that this matter can be treated as closed." A month later, on November 25, Mr. Melkert even sent Mr. Wolfowitz a personal, hand-written note saying, "I would like to thank you for the very open and constructive spirit of our discussions, knowing in particular the sensitivity to Shaha, who I hope will be happy in her new assignment."

And when anonymous World Bank staffers began to circulate emails making nasty allegations about Ms. Shaha's job transfer and pay in early 2006, Mr. Melkert dismissed them in a letter to Mr. Wolfowitz on February 28, 2006, because they "did not contain new information warranting any further review by the Committee." Yet amid the recent media smears, Mr. Melkert has minimized his own crucial role. - Opinion Journal

If you are not familiar with the details of this sham incident, in that he tried to recuse himself of the conflict of interest that his girlfriend already worked at the bank, then you should read the entire article linked above.

If you are a rational person this one article clearly documents that this scandal is nothing more that something created by politicians and the press.

A couple of years ago the politicians and the press would have gotten away with it. But now we have the internet and a means for 'alternative' (unbiased) versions of the story to see the light of day. But the system is not perfect. Take this story. The hit piece comes out first and gets the most attention. Then someone has to go and investigate the situation and publish their version. This of course gets nowhere near the circulation as the fraudulent version, partly because so many people want to believe in the lie. This belief in the lie explains the recent vote by the European Parliament to damand Wolfowitz's Resignation, in complete disregard that he has done nothing wrong:

THE European Parliament on Wednesday called for the resignation of World Bank President Paul Wolfowitz, adding to the pressure on the head of the poverty-fighting institution to step down.

Wolfowitz, a former member of the Bush administration, has already faced calls to give up his post after revelations that he approved a promotion and pay raise for his bank-employee girlfriend before she was assigned to work at the US State Department. [Yes, that is a true statement, completely omitting how this happened and his initial attempts to be removed from any dealings concerning his girlfriend.]

Lawmakers asked EU leaders to press the White House over the subject at a EU-US summit in Washington on Monday.

They voted 333-251 with 31 abstentions to include a paragraph in a resolution on transatlantic relations calling on Germany, holder of the 27-nation bloc's rotating presidency, and the United States to ask Wolfowitz to stand down.

They should "signal to the president of the World Bank, Paul Wolfowitz, that his withdrawal from the post would be a welcome step towards preventing the bank's anti-corruption policy from being undermined," the paragraph said. - The Scotsman

There are two amazing items in this story. One, that so many members of Parliament would vote for his removal, either not knowing the facts, or completely disregarding them. The World Bank has not even come out with any determination that he did something wrong, and is not likely to do so, since his actions at the time, were approved by the World Bank's ethics committee. The other amazing thing is that 250+ MEPs voted against calling for him to resign. That is pretty sizable support coming from that group.

It seems that we are still a week away from finding out if Mr. Wolfowitz will manage to keep his job. If not, maybe President Bush can send in John Bolton as a replacement. Better yet, maybe we should keep the position of Presient to Europe and let them take over filling the position as well as filling the Bank's coffers to the amount that we do now.
Personally, I hope Mr. Wolfowitz manages to keep his position. And once this issue is behind him, that he works double hard doing whatever it is that the employees of the bank are against. Clearly, this is an organization that needs cleaning from top to bottom. Too bad if he does stay, the press and the politicians will report in such a way as to marginalize his effectiveness.
The last thing the world needs, other than the lying/biased media, is lying bankers. From the framing of Wolfowitz, it seems that the World Banks has a number of liers.
The Real World Bank Scandal - Opinion Journal
A Tale of Two Scandals - Opinion Journal

Update: 26 April 2007
I have never seen anything like this. Is anyone working over there at the World Bank? 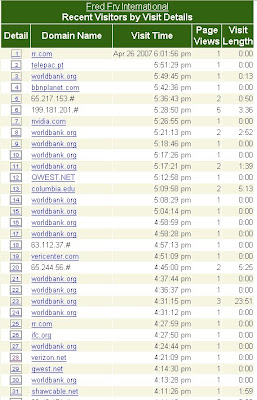 Are they all looking to see if their boss has been booted yet? While your he, be sure to click on the UN label.
Posted by Fred Fry at Thursday, April 26, 2007

Boy, are you gullible.

Read the docs again. Wolfowitz, and no one else, dictated the level of the pay raise. When she left, she wasn't actually at the State Department (the explicitly stated that she was not seconded to them) raising the question of who was supervising her and what she was doing. There's also the issue of how she got a security clearance and free access to secured areas of Foggy Bottom, with none of the usual protocols followed.

Besides the fact that there is merit in the pay raise story, the more important point is that's not the whole story. Wolfowitz rode roughshod over procedures in bringing in his personal aides, giving them salaries outside the pay scales and evading the HR process. Other Wolfowitz appointees have been busy trying to slip changes into Bank policy on population growth. Then there is his management style, which, to put it kindly, is lacking. Add it all up, and he's lost the confidence of everyone involved but George Bush. While shutting the bank down might indeed be a good result, it is clear to everyone, including Wolfowitz, that it can't move forward with him at the helm.

Not that he cares about that - his hiring of Robert Bennett, in my opinion, is just a move in a chess game aimed at ensuring that Wolfowitz leaves the bank with as much of the bank's money - money contributed to alleviate the suffering the world's poorest people - in his own pockets. He will take the bank to the wall of destruction, even though he knows he's not staying, just to get as fat a severance check as he can when his head finally rolls.

If you want to root for a guy like that, go ahead, but don't go thinking there's some principle involved other Wolfowitz's personal aggrandizement.

Thank you commentator from Spain.

Take this from the WSJ:

--------------
The paper trail shows that Mr. Wolfowitz had asked to recuse himself from matters related to his girlfriend, a longtime World Bank employee, before he signed his own employment contract. The bank's general counsel at the time, Roberto Danino, wrote in a May 27, 2005 letter to Mr. Wolfowitz's lawyers:
"First, I would like to acknowledge that Mr. Wolfowitz has disclosed to the Board, through you, that he has a pre-existing relationship with a Bank staff member, and that he proposes to resolve the conflict of interest in relation to Staff Rule 3.01, Paragraph 4.02 by recusing himself from all personnel matters and professional contact related to the staff member."

That would have settled the matter at any rational institution, given that his girlfriend, Shaha Riza, worked four reporting layers below the president in the bank hierarchy. But the bank board--composed of representatives from donor nations--decided to set up an ethics committee to investigate. And it was the ethics committee that concluded that Ms. Riza's job entailed a "de facto conflict of interest" that could only be resolved by her leaving the bank.
--------------

He asked not to have to deal with any matter concerning his girlfriend.

Funny how you are now attacking the girlfriend asking what she is up to at the State Department. What is the deal with that. It is not like she wanted to leave. She was made to leave, and that is where the raise come in. To compensate her for being forced out.

Sounds like MR. Wolfowitz is busy working at the bank. What are the rest of the employees up to?

Wolfowitz deserves the beating he is getting. Not just for being guilty of nepotism, but for being the architect of flawed policies at DOD. He proudly embraced a truly flawed ideology-namely the neo-con creed that we had some sort of obligation to forcibly midwife a "new Iraq".

I'm tired of him and the rest of the herd getting a free pass for their mistakes. If this is part of making him suffer for his mistakes at DOD-then smear away.

Thanks for the confirmation that 'Fake-but accurate' is still still an active strategy in the liberal playbook.