While Europe takes the day off to permit their leftists to protest the capitalist system of work-for-pay, don't think that the US has nothing to celebrate on May 1 for it is Loyalty Day:

Loyalty Day, 2007
A Proclamation by the President of the United States of America

America was founded by patriots who risked their lives to bring freedom to our Nation. Today, our citizens are grateful for our Founding Fathers and confident in the principles that lead us forward. On Loyalty Day, we celebrate the blessings of freedom and remember our responsibility to continue our legacy of liberty.

Our Nation has never been united simply by blood, birth, or soil, but instead has always been united by the ideals that move us beyond our background and teach us what it means to be Americans. We believe deeply in freedom and self-government, values embodied in our cherished documents and defended by our troops over the course of generations. Our citizens hold the truths of our founding close to their hearts and demonstrate their loyalty in countless ways. We are inspired by the patriotic service of the men and women who wear our Nation's uniform with honor and decency. The military spouses and families who stand by their loved ones represent the best of the American spirit, and we are profoundly grateful for their sacrifice. Our country is strengthened by the millions of volunteers who show deep compassion toward their neighbors in need. All citizens can express their loyalty to the United States by flying the flag, participating in our democracy, and learning more about our country's grand story of courage and simple dream of dignity.

The Congress, by Public Law 85-529, as amended, has designated May 1 of each year as "Loyalty Day." This Loyalty Day, and throughout the year, I ask all Americans to join me in reaffirming our allegiance to our Nation.

IN WITNESS WHEREOF, I have hereunto set my hand this thirtieth day of April, in the year of our Lord two thousand seven, and of the Independence of the United States of America the two hundred and thirty-first.

Now if that is not enough for you, you can celebrate the collapse of the Soviet Union. At least we no longer have to see the news coverage of the Soviet Army parading through Red Square. Of course this does not stop idiotic Socialists/communists from marching elsewhere, like Sweden: 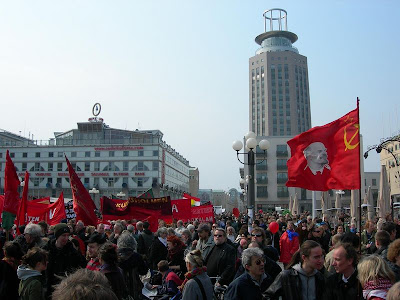 I am not sure why there are still communists around, other than perhaps they have some sort of mental condition, or are just plain stupid. Every Single Communist State Has Been A Complete Disaster. Take this about the standard of living in the socialist Soviet Union:

In the Soviet Union in 1989 there was rationing of meat and sugar. The average intake of red meat for a Soviet citizen was half of what it had been for a subject of the Czar in 1913. Blacks in apartheid South Africa owned more cars per capita. The only area of consumption in which the Soviets excelled was the ingestion of hard liquor.
Two-thirds of the households had no hot water, and a third had no running water at all. According to the government paper, Izvestia, a typical working class family of four was forced to live for 8 years in a single 8x8 foot room, before marginally better accommodation became available. The housing shortage was so acute that at all times 17% of Soviet families had to be physically separated for want of adequate space.
A third of the hospitals had no running water and the bribery of doctors and nurses to get decent medical attention and even amenities like blankets in Soviet hospitals was not only common, but routine. Only 15 percent of Soviet youth were able to attend institutions of higher learning compared to 34 percent in the U.S. The average welfare mother in the United States received more income in a month, than the average Soviet worker could earn in a year. - Wikipedia

Sounds Great. To bad they had to ruin it will 60 odd million deaths. 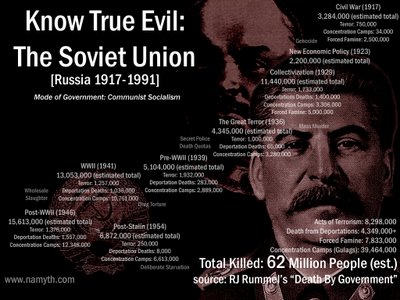 Did I mention that today is also law day?

Law Day, U.S.A., 2007
A Proclamation by the President of the United States of America

Our Nation is built upon the rule of law and guided by our founding promise of freedom, equality, and justice for all. Law Day is an opportunity to celebrate the Constitution and the laws that protect our rights and liberties and to recognize our responsibility as citizens to uphold the values of a free and just society.

Generations of Americans have served the cause of justice and shaped our legal institutions to ensure that the blessings of liberty extend to every citizen. The men and women of America's legal community have worked to defend the Constitution, protect the innocent, and secure the rights of their fellow citizens. Their efforts have helped make our Nation a shining example of justice.

America's faith in the rule of law has endured through the centuries. Today, we strive to prepare our next generation of leaders to carry on America's tradition of freedom and democracy. The theme of this year's Law Day, "Liberty Under Law: Empowering Youth, Assuring Democracy," highlights the importance of teaching our young people about the vital role they can play in our democratic society. We all have a duty to help our youth become responsible citizens by promoting the virtues that sustain our democracy and fostering a deeper understanding and respect for our Constitution and laws. These young men and women will shape the future of our country, and their spirit and character will help promote justice, equality, and opportunity throughout our country.

The strength of our legal system requires the ongoing commitment of every citizen. As we observe Law Day, we celebrate our Nation's legal heritage and honor those who work to advance the cause of justice.

IN WITNESS WHEREOF, I have hereunto set my hand this twenty-seventh day of April, in the year of our Lord two thousand seven, and of the Independence of the United States of America the two hundred and thirty-first.

Maybe someone should tell the illegal Aliens what day it is. Oh wait, since when is obeying the law of importance to them.
Posted by Fred Fry at Tuesday, May 01, 2007