This Weeks Photo:
This is the cable-laying vessel GLOBAL SENTINEL.

This vessel is operated by Tyco Telecommunications.

Tyco Telecommunications, a business unit of Tyco Electronics and an industry pioneer in undersea communications technology and marine services, is a leading global supplier for today's most demanding requirements. In over 50 years of operation, we have designed, manufactured, and installed more than 80 undersea fiber optic systems around the world. Our industry-leading research and development laboratories, manufacturing facilities, installation and maintenance ships, supply depots, and management team work together to deliver integrated solutions and network upgrades, supporting the needs of telecommunications carriers, Internet providers, offshore and scientific research customers worldwide. - Tyco 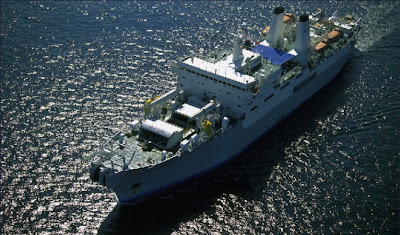 This Weeks Items:
Eagle Speak has "Port Security: The Hong Kong Model". I had the pleasure of meeting Eagle1 at the MilBlog Conference over the weekend. He has a roundup of the Conference here. You can find this week's edition of Sunday Ship History here "Sunday Ship History: The United States Exploring Expedition, 1838-1842" which notes the anniversary of the WWII Battle of the Coral Sea. Go to Steeljaw Scribe for a summary of the first day of the battle.

Tims Times (at sea) has great posts on pilot boarding by catamaran, pilot disembarking by helicopter, and the locks in Antwerp. However, I am linking to this post since I too did something similar. It is a job hazard for Deckies. Be sure to scroll through his other posts.

The Pilot Boat (at sea) has an explanation of Pilot Boarding.

Shipping Times (UK) has the world's largest non-governmental hospital ship, the AFRICA MERCY, sailing for Liberia on its inaugural cruise.

Pandagon has the odd story of Navy Petty Officer 3rd Class Jason Knight's dismissal from the Navy under the Don't Ask, Don't Tell policy for gays, and his recall to active duty with promotion despite being as gay as before. (And here I was thinking that declaring that you were gay was an easy way to get a trip home from Iraq.)

The crazy Kiwi at Sea (at sea) has a post about an encounter with a bird on the bridge while on anchor watch. This is also one of those posts that makes non-merchant mariners wonder if he went or was sent to sea.

Now for Something Different has the amazing tale of "Yankee Ingenuity and Perseverance" featuring Captain Isaac Hull and the crew of the USS CONSTITUTION during the start of the War of 1812. All Americans should read it.

Life at Sea has a poem on the firing of a boiler.

Scandinavian Shipping Gazette has a second life for single-hull tankers, as bunker barges in Nigeria.

English Russia has amazing hotos of the remains of the KURSK submarine.

Cruise Ship Law Blog has the news that the black box from the cruise ship SEA DIAMOND was brought to the US for analysis.

The Raleigh Chronicle has four new container cranes for the Port of Wilmington, North Carolina.

Fundamentalist Cycling has a crossing situation with a cargo ship during his morning drive to work.

Maritime Digital Archive has US calls at the World Trade Organization for an end to fishing subsidies.

The Fiji Times claims that over 90% of the Japanese Population is unaware of the extent of their country's whaling activities.

Military Sealift Command (MSC) has published their May edition of SEALIFT Magazine which includes a story on the upcoming retirement of the combat stores ships USNS SPICA and USNS SATURN. 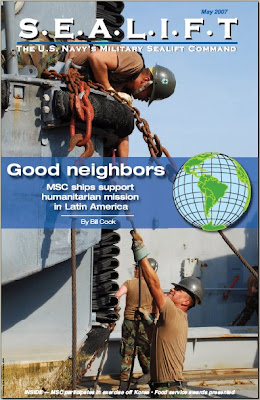 You can find MSC's 2006 Year in Review, which is full of great photos, here.

Sri Lanka News has the complete looting of the cargo and everything removable from the Jordanian Cargo Ship FARAH 111 by Tamil Tigers.

Helsingin Sanomat covers submarines in the Baltic Sea while taking a trip on the Finnish Attack Craft FAC PORVO.

Stranded on the Biggest Island is a blog by a mariner 'stranded' on the great island of China. (I linked to the blog instead of a specific post.)

LNG hysteria 'simply wrong' - HOUSTON 01 May – Concerns that LNG tankers could make an effective terrorist weapon are unfounded, according to one industry leader. Tony Stone, VP of operations and engineering with Louisiana’s Trunkline LNG, said yesterday that hysteria being spread about the risks of LNG is simply wrong. In remarks touting the value and growth of the global LNG industry to the International Association of Ports & Harbors’ meeting in Houston, Stone told attendees that the LNG mix carried on tankers “is just too rich to explode.” He extolled that “an explosion requires the proper mix of fuel, oxygen and an ignition source” and said that while LNG would burn, “it won't explode”. His comments were in response to a query from Houston ports boss Tom Kornegay, who said he had recently seen a television programme depicting terrorists in a small boat crashing into an LNG tanker. Kornegay said the programme presented the view that such an incident would rupture the tanks and release a fiery and explosive cloud over surrounding communities. “That’s just wrong,” Stone opined, adding that such a scenario could be true with liquid propane gas (LPG – which is heavier than air) but not with LNG, which he said is lighter than air and will simply float away. - Fairplay Homepage (Used with Permission)

Thnx for your appriciation....
Your suggesions are always welcomed.