Take a look at this map below of historical CO2 emissions. It shows the following:
Historical Contributions:
Americas
- United States: 30.3%
- Canada: 2.3%
- South and Central America: 3.8%
Total: 36.4%
Europe
- Western Europe: 27.7%
- Eastern Europe & Russia: 13.7%
Total: 41.4%
While the US is currently the largest emitter of Greenhouse gasses, it is Europe and Russia that has been the biggest emitter of Greenhouse gasses. It is important to know this since Europe keeps accusing the US of not doing enough to combat global warming.
Europe is currently enjoying a substantial reduction in how much they pollute as a result of the collapse of the Soviet Union. This has rewarded Russia with carbon credits due to the Soviet Union being so ecologically damaging to the planet. But since when are the worst offenders rewarded. Europe did nothing to earn these credits that they are getting ready to trade between each other. The US earned them by pushing for the collapse of communism. 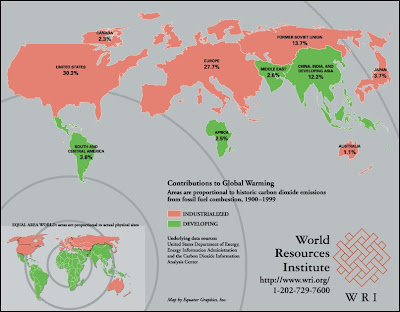 So the next time you hear that the US is the world's worst polluter, you can point out that Europe is just as bad, other than for signing a promise to do better which they have yet to act on.
Graphic found at EarthTrends.org Here.
Posted by Fred Fry at Sunday, May 06, 2007

There is just one thing that you haven't considered.
USA population is 300 million.
Europe and former SU countries (counting only european ones) is 727 million.
This means that every US citizen has a (storical) emission that is about twice the pro capite emission of the europeans...

Actually I did. Take a look at the post. It says "Americas". The total is from the North Pole to the southern tip of South America.

One thing to consider is the 'quality' of the emission. Is it wasteful or productive. I dare say that European emissions are more wasteful than US emissions, despite all our SUVs.