Note: This Tuesday, 22 May, is Maritime Day in the US.

Siba Ships is also home to the world’s biggest and most technically advanced livestock carrier, the Becrux, capable of carrying both cattle and sheep at the same time.

The construction of the Becrux was the result of a policy aimed at achieving maximum quality and efficiency while obtaining the best results regarding animal welfare and mortality.

The company remains committed to an ambitious construction project that in 2007 will see the launch of the world’s first livestock carrier with its own independent double propulsion system (IPS Independent Propulsion System). - Siba Ships 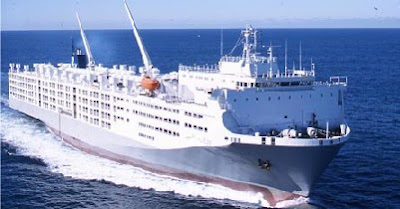 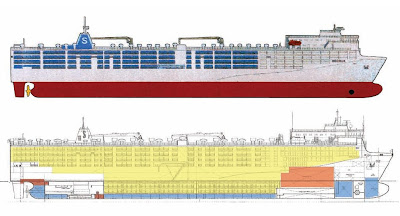 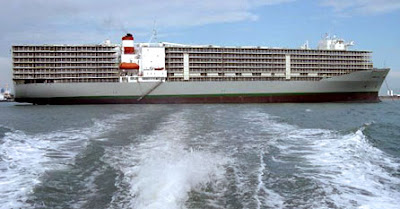 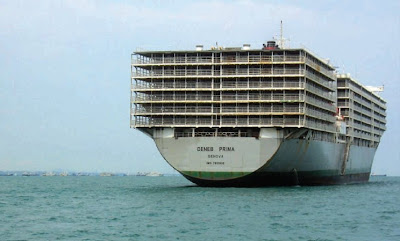 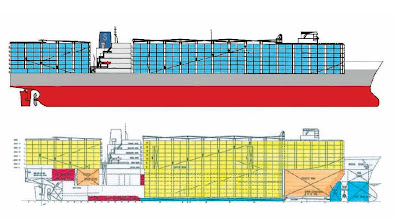 Take a good look at the layout of the DENEB PRIMA. It used to be a containership. That is why the 'house' is back at the stern and the bridge was relocated forward.


This Weeks Items:
Eagle Speak has the launch of the armed Nuclear Fuel ship PACIFIC HERON. Once you have read that, be sure to go to his home page and scan the plethora of other maritime stories he has posted over the last week, including "Sunday Ship History: International Ice Patrol"

The New York Post has the sudden death of a SUNY Maritime Cadet on the TS EMPIRE STATE IV just days after it departed for its summer training cruise.

CBS News 60 Minutes covers the US Coast Guard's seriously botched modernization Program in "The Troubled Waters Of “Deepwater”". Sadly, this is well-earned exposure.

Sailors, Mariners & Warriors League has the ammunition ship USNS SHASTA's rescue of the crew from the MV HAUROSI after it suffered a major engine room fire.

New York's Newsday has (South) Korea's welcome of the first cargo ship from the North in over 50 years. (Meanwhile other countries like Japan, Australia and the US maintain UN sanctions against the North.)

Tims Times (at sea) has his experience with today's Soviet port security in St. Petersburg. (I have a post here of an image of a USSR passport issued in 2000.)

gCaptain points to NATO's investigation of how to provide protection to oil and gas facilities in Nigeria. (This is a bad idea. Only Nigeria can fix the problem. If NATO moves in, it has the same effect as relieving Nigeria of its responsibility to solve the situation and even gives them the opportunity to permit NATO to do its dirty for for them.)

The Pilot Boat (at sea) has photos of a Brazilian sunset.

Life at Sea has a great post about pirates including a list of famous pirates and modern victims.

American Shipper has China's effort to build a fleet of at least 90 supertankers to increase the percentage of oil imported by China carried on Chinese-flag vessels.

The BBC has the EU's decision to build its Galileo GPS System using public funds after the attempt to build the system using a public-private partnership has failed.

EU Referendum has his two cents about the current developments in the Galileo disaster, including the possibility of taxing or licensing your GPS receivers.

Shipping Times (UK) has the sale of Scotland's Viking Offshore to Vroon of the Netherlands.

The Yankee Sailor has a serious police raid at the Japanese Naval Academy.

CDR Salamander has the USS EARNEST G SMALL and the story about how it lost its bow at sea and lived to sail again.

From the Back Nine has Cruise tips from a frequent cruiser.

The Space Review has a story on the post-war second life of the WWII Liberty Ship AMERICAN MARINER.

Mr. Boat Blog has the amazing 1/8th scale model of the MAJESTY OF THE SEAS. (Don't let the word model five you a false impression about its size. The damn thing is huge!)

The May Edition of Marine Log is available on the Internet. (Click on the image to open it.) 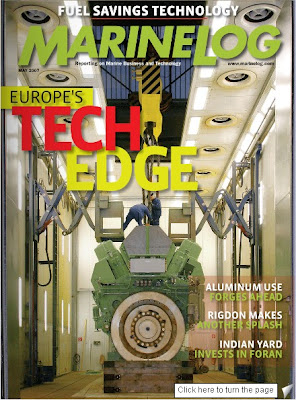 Times Union has a great piece about being on time. While not exactly a maritime post, other than their title for the piece, it does apply. (A ship will only wait for its captain)

President Bush seeks US accession to UNCLOS - The White House released a statement from President Bush urging the Senate to act favorably on United States accession to the United Nations Convention on the Law of the Sea (UNCLOS). The US will also seek to have the IMO designate the Papahanaumokuakea Marine National Monument as a Particularly Sensitive Sea Area (PSSA). (5/15/07). - Dennis Bryant Holland & Knight homepage (Used with Permission)

European owners shun EU umbrella - LIVERPOOL 16 May – Alfons Guinier, secretary-general of European Community Shipowners’ Association, stood firm against protectionism at an EU level yesterday, alleging that the Jones Act had been responsible for the severe reduction in US-registered shipping. He further warned that protectionist measures would lead to flagging out from European registers and, more significantly, to similar measures from India, China and Japan. He outlined the EC’s Green Paper on maritime policy to members of the seafaring union Nautilus UK at their biennial general meeting in Liverpool. Explaining why he felt it would be unhelpful for the EU to speak on behalf of member states at IMO and ILO, Guinier opined that maritime expertise in individual states would be lost if the single maritime voice came from Brussels. Similarly, a single European ship register would mean issues such as competency, taxation and social security would need to be harmonised by law, whereas they are now moving closer through commercial imperatives. Lamenting the decline in maritime expertise across Europe, Guinier called for some of the EU funding currently going into research to go into training instead. - Fairplay Homepage (Used with Permission)