Is Black Culture behind the DC AIDS Epidemic?

By now everyone has probably heard about the 'Don't Snitch' culture that has taken control of many Black communities in the US mainly thanks to pro-crime rap music.

Last week, 60 Minutes covered this perverse culture of "Don't Snitch". This 'culture' in effect prevents the police from catching criminals, simply because there are no witnesses to any crimes, that is if anyone even bothers to report a crime. The problem is so great that in some places nine out of ten murders are going unsolved as witnesses and others who might have information about crimes refuse to come forward.

"Anybody who comes forward and talks to the police about something they witnessed, a murder or a crime, are they a snitch?" Cooper asks.

"Yes… It's a crime, remember, in our community, to snitch," says Tess. - 60 Minutes (Click the link to read the whole story on Don't Snitch.)

I moved out of DC because it has a huge crime problem. While there are all sorts of calls for more action to be done in high-crime areas, it is starting to appear that the crime problem in black communities has been bought and is owned by those who live there. This means that it is up to them to solve their crime problem, starting with returning to cooperating with police again. (One excuse I heard was that the police mistreat informants, but this excuse falls flat when you consider that tips can be called in anonymously.)

Now I wonder, is high crime the only result of this new development in Black Culture? Maybe 'don't snitch' is also one reason why Washington, DC has such a high AIDS infection rate? Any person would be hesitant to tell others that they have AIDS. That would be all the more likely in a culture of don't tell.

How bad is the AIDS epidemic in Washington DC?

"Since June we have screened more than 16,000 individuals," Martin added. Of these, 580 have been positive, giving an infection rate of 3.5 percent -- far above the estimated U.S. national rate of between 0.8 percent and 1.2 percent. - Reuters

Highest in the country. Well that still can't be so bad, right?

We really need to get people thinking about HIV more," he said. "People don’t really think about it all that much. If Washington, D.C., were its own country, it would have the third-highest rate of HIV in the world, but you never hear about that." - Bangor Daily News

That is bad, and like most bad things, Washington, DC seems to excel at being at the extreme end of a bad thing. They are estimating that 1 in 20 DC Residents might be infected with the AIDS virus.

1 in 20 is 5%. To put things in perspective, the HIV prevalence rate for all of Sub-Saharan Africa is 7.4%. Miami, Florida's hardest-hit city, has a rate of around 1%. - AIDS Combat Zone

One suggested way of combating this epidemic in Washington, DC is to distribute free condoms like they do in Africa. However, in Africa, the issue for many is one of access and the ability to afford condoms, as well as being an education issue. This would not be the case for those living in Washington, DC. They are just being lazy, careless or just don't care. But if people living in DC are too lazy to buy a condom, what makes anyone think that they will not be lazy enough to use one? Or maybe, not using condoms is just another part of black culture?

Then there is the problem of unwed/single mothers. Don't snitch fits nicely here. Really, if you are going to give murders, drug dealers and robbers a free pass, why pick on men for getting women pregnant and then ditching them with their child.

Now all these issues can be examined in all sorts of ways. So how about investigating how the community itself might be responsible for its problems and social issues. Then perhaps the problems can be tackled. But for that to happen, people are going to have to look to school to get their education instead of a rap song. 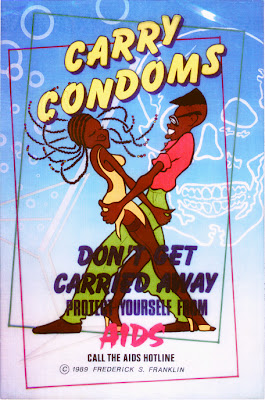