This Weeks Photos:
Here are some photos from the website of the Netherlands Shipping Company Anthony Veder.

Anthony Veder offers you a modern high quality fleet of gas tankers for the transportation of LPG, petrochemical gases, CO2 and LNG. The fleet is continuously modernized, renewed and adjusted to comply with new regulations, customer requirements, and the high standards of the gas industry. The Rotterdam based company has a strong customer focus and offers a reliable and flexible service with a wide range of high quality modern gas tankers. - Company website

LPG, liquified petrolium gas, in addition to being transported in little tanks that are attached to barbeques, is also transported by ship. (And people are afraid of LNG ships.) 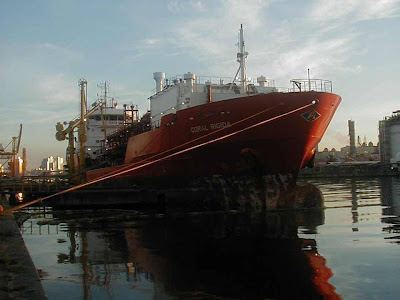 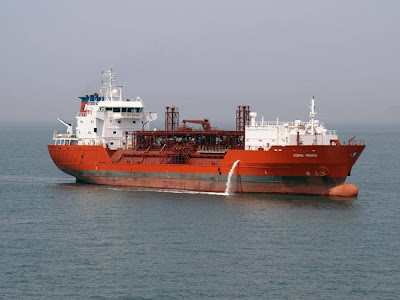 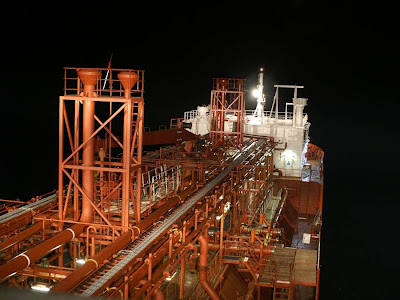 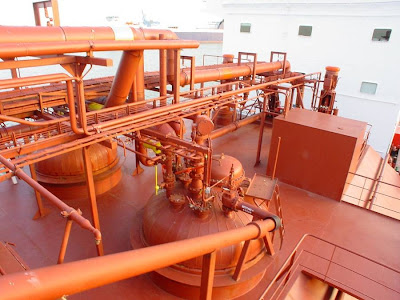 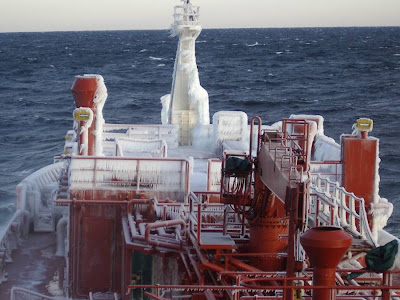 Wikipedia has a summary of the last voyage and sinking of the RMS LUSITANIA on May 7, 1915 with the loss of 1,198 passengers and crew.

Eagle Speak covers a news report that sailors at sea work around the clock. You can find this week's edition of Sunday Ship History here: "Sunday Ship History: Breakaway music" covering one aspect of underway replenishment.

USA Today has a Q & A with Captain Karin Stahre Janson, the first woman to become captain of a major cruiseship, the MONARCH OF THE SEAS.

The Seattle Times has anti-war protesters at the Port of Grays Harbor against the loading of the MV CAPE HENRY. The vessel's MSC page can be found here. (Yes, they support the troops. The question is, which troops?)

Sailors, Mariners & Warriors League has the lost story of the HMS CORNWALL, the vessel whose boarding party was taken by the Iranians. It involves two lesbian crewmembers, 9 pints of lager, a fist and a court martial.

The Pilot Boat has the soon to be christened M/V CORVO and gives a summary on load lines.

Scandinavian Shipping Gazette has a warning about a fake pilot station in Nigeria.

The Monitor has "Engineers and Accountants".

California Photos has pictures of the SS RED OAK VICTORY.

Balita (Philippines) has the arrival of two of South Korea's Maritime Training Ships in Subic Bay to take advantage of local navigational training.

The United States Halocaust Museum has the sad voyage of the SS ST. LOUIS which sailed from Germany on 13 May, 1939 carrying Jewish refugess to Cuba. They were eventually refused entry in Cuba, the US, and Canada before returning to Europe where passengers were eventually admitted to Great Britain, the Netherlands, Belgium, and France. A short summary is also at Wikipedia.

Project Disaster has a summary on the TWIC Program.

The Stupid Shall Be Punished has coverage of the accident report for the deadly USS FRANK CABLE steam rupture accident.

Dark Roasted Blend has a photo showcase of Ekranoplans.

Confessions of a Train Geek has photos of an oversize transport by NB Southern Rail shipment. (Posted in recognition that this stuff needs to get to a port somehow.)

Never Sea Land has "Crew of the Week". (Warning: Do not click the link if you are offended by women in bikinis.) This blog also does a 'Mermaid of the day'. So go to the homepage and scroll through the posts. Same warning applies. Not like I should have to give one given the subject of the post.

Here is an extract from the News Release:

In Etelka Barsy-Partaki's (EPP-ED, HU) own-initiative report on the mid-term review of the Commission's 2001 Transport White Paper, there was general support for the Commission's stance, but MEPs in the committee stressed that the rapid completion of the TEN-T network was the best way to create conditions for a making best use of all the different mode of transport in a complementary fashion, an approach known as co-modality. A shift in the balance of modes of transport ("modal shift") was essential for reducing the environmental impact of transport. Shifts to rail, bus and coach, maritime transport or inland waterways should be achieved and emphasis should be put on those transport modes whose level of participation is still low. - Full Press Release

If the EU was concerned about the environmental impact of transport, then it would not be preparing to launch dozens of rockets into space to create a duplicate of the US's Global Positioning System. I have seen no mention anywhere of plans to offset the CO2 emissions from that project. 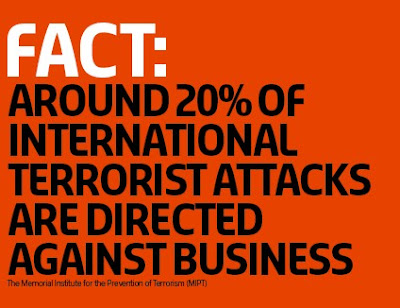 Mystery surrounds Sinegorsk master fate - ST PETERSBURG 08 May – The apparent arrest and detention in Finland of the master and chief engineer of the Sinegorsk, a timber carrier in the Fesco fleet, remain a mystery this week, as Finnish officials at Turku port claim to know nothing about the jailed mariners, or the pollution charges said to have been lodged against them. The two men are believed to have been detained by the Finnish authorities at Turku, according to Leonid Belov, a duty official at the St Petersburg sea-rescue centre. However, Fesco spokesman Tatiana Kozina told Fairplay the Sinegorsk was released from Turku port on 30 April, manned by a substitute master and chief engineer flown in by the company from Russia. "The Sinegorsk captain and chief engineer remain in the port," Kozina said, "to assist the representatives of the Finnish sea authorities in their review of this incident." She added that there might have been a fuel spill during bunker loading at Turku, but denied there had been any pollution while the vessel was underway between Naantali and Tallinn. Kozina claims Fesco cannot confirm the arrests. However, Belov and Russian newswires have reported that the jailing was sought by the Finnish authorities, and ordered by a court. The two seamen, whose names have not been disclosed, will remain in detention until mid-June, when their case comes up in court. Russian maritime sources say this is "ünprecedented". Belov told Fairplay that tests of the oil slick, spotted in the waters off Turku, will be compared to fuel samples taken by the Sinegorsk, and should be definitive on whether it or another vessel was the source. - Fairplay Homepage (Used with Permission)