Mexico and the US Governments are the Immigration Problem

10 to 20 percent of all Mexicans live in the US. (Some state that half of them live here legally.)

With Mexico at the Southern US border, it is no surprise that 86% of all illegal aliens captured in the US are Mexican Nationals. In 2005 there were over one million apprehensions of Mexican nationals either at the borders or within the country itself. 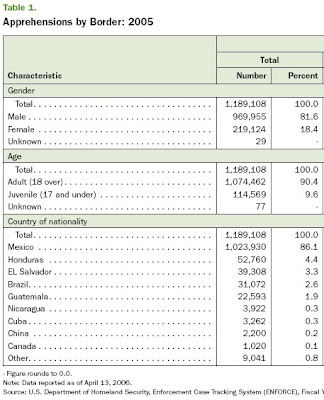 Mexico does nothing to stop this mass exodus from their country. Worse, they actively work to assist illegal alien Mexicans to get into the US. They have explained to the US Government that a Mexican has a right to roam wherever they please within Mexico, including right up to the border. They have also vigorously fought any US attempts to build a border fence to restrict Mexicans from roaming outside their national border into the US.

Once the illegal alien Mexicans get here, the Mexican Consulates provide them with identity documents in the form of “Matricular Consular” ID cards.

Roberto González, 20, a construction worker living here illegally, waited recently in the lobby for the identification card the Mexican government issues known as the “matrícula consular.” The card is honored in the United States by many police agencies, employers and — most important — by banks, which are used by countless immigrants to send billions of dollars home every year. But it is a lightning rod for critics of illegal immigration, who see it as a demonstration of the Mexican government’s helping its citizens live in the United States illegally.

“I will be able to open bank accounts, pay water and light bills, have an easier life here with the consulate and the documents they give,” said Mr. González, one of more than 200 people who have received a card since the consulate opened. - NY Times

Does anyone see a problem with this? Why is it that Americans are hassled to death to ensure they follow the rules and illegal aliens are given all sorts of ways to get around them.

Here is where the US Congress steps in. Not to fight illegal immigration, but to assist it. It is illegal to accept Matricular Consular Identity cards in the US as a form of identification, but congress has prevented this law from being put into action. These identity documents are used as an excuse to permit service to illegal aliens, such as opening bank accounts, even though it is well known that these documents are completely unreliable according to the FBI, and Congress.

Regulation in the federal budget prohibited U.S. businesses from accepting these cards, but an amendment passed September 14, 2004, which Congressman Miller opposed, that pulls this requirement. - Congressman Gary Miller

In the example above, you have proof that the US Government is colluding with the Mexican Government to facilitate illegal immigration. Really, do you think we would have 12 million illegal aliens here if they had a hard time doing things once they got here?

Just to show how reckless the allowance of these IDs are, note that Mexican Matricular Consular ID cards are such a weak form of Identity documents that they are not currently accepted as a valid ID IN MEXICO or even valid for entry into Mexico.

This is a clear exemption from strict identity rules. Also, since the law prohibiting acceptance of these IDs is not in place, they completely subvert other laws that require proper identification.

Local immigrants say illegal aliens are contributing to Maryland's surge in license applications by flocking to the state when their visas expire or by using the Maryland addresses of relatives.

"I heard that it's easier [to get licenses] here because in other states you need documents, but here it's not required," said 16-year-old Marcela, a Salvadoran immigrant who lives in Silver Spring and did not want to give her last name.

Antonio Lopez, a Guatemalan immigrant living in Hyattsville, said it is common for illegals to come to Maryland to apply for a license because a green card or Social Security card isn't required. - Washington Times

Imagine this, not only are illegal aliens obtaining drivers licenses illegally, they are also giving their names to the press to publish. Seems like they have no fear in Immigration going into Maryland's database to look these illegal aliens up. (Although doing that would surely reduce the number of illegals going to Maryland for licenses.)

Now can you imagine how you would be treated if you went to open up a bank account or apply for a drivers license without proper ID and a Social Security card?

Now with that drivers license, they can get a bank account, credit card and Could probably even apply for social services, which legal alien immigrants are not able to do. In my case, I had to agree to fully support my foreign wife and I am criminally liable if she applies for any Government program such as unemployment or welfare, even if we get divorced! (I am responsible for her until she either works full time for ten years, permanently moves back to her home country or I die.)

There is currently a bill in Congress that, if made into law, will legalize many of the 12 million illegal aliens living in the US. This will do nothing to stop the flow of Mexicans into the US. It however will surely increase the amount of illegal aliens trying to get here for the next declaration of amnesty. (My illegal alien friends moved here a couple years ago when Amnesty was first being talked about in the hopes of getting amnesty.)

Excellent article! Definitely not something I should have read right before sleeping though (topic raises the blood pressure), but definitely a great resource and great reading. As is the entire blog.

Half of my family are not American. Those in the US today are either here legally (and have worked, paid taxes, kept the money in the US and not received any gov't aid) or are descended from legal immigrants (same as above). In addition, I have missed the pleasure of foreign friends and relatives coming for an extended visit because they could not legally get a short-term work visa. Did they break the laws and come anyway? Nope...Instead, they went to England and then one went to Israel.

Why is it okay to break the laws if you're Mexican and not if you’re western European, etc? The whole situation, amnesty et al, is discriminatory against those who are legal residents & citizens. (I thought liberals positioned themselves as those who fight discrimination? Hmmm.)

I am going to quote you from now on: "If Congress is going to pass this sort of amnesty, they should also offer a Greencard to all Mexicans still living in Mexico (and Canadians too just to be fair)..."

You bring out a very good point in that there are so many who would like to come here but are not able to since there are rules and limits to do so.

Unfortunately, nobody is interested in addressing the problems that are in the other countries.

I was serious about offering all Mexicans and Canadians greencards. Maybe that will force Mexico to make changes once they realize there is nobody left to do the work. The US should also have open immigration with EU Member countries whether they reciprocate or not. The trick in all of this is to admit the educated from these countries so that they can create new businesses that will create jobs for the low-skilled workers who have fled here already.

If you are looking for a immigration consultant in US you are most welcome in U.S immigration for the best services in the industry.