Welcome to the 24th edition of Maritime Monday.

This Weeks Photos:
Here are some pictures of the dramatic rise of the COUGAR ACE. Things could have turned out differently, like as in the TRICOLOR disaster (The TRICOLOR Cars). I did run across a couple photos of damage on the car decks, but it seems that the page has since been removed or relocated. According to reports and what little I did see, many of the cars did not break their lashing straps and are not all piled up against the port side of the vessel. (Try that with a container vessel!): 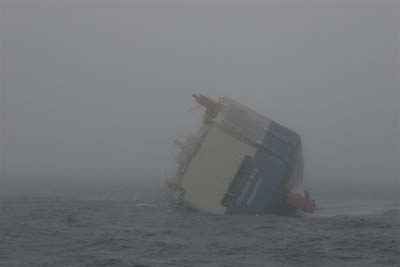 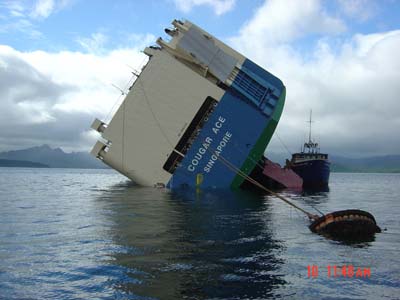 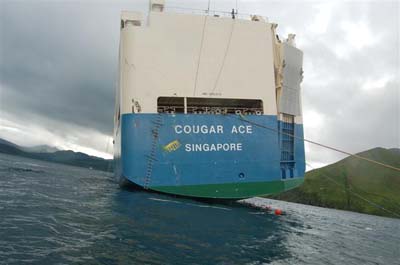 Sailors, Mariners & Warriors League has news (note: Page come with music) of the ordered sale of the Egyptian cargo vessel THE EDCO, which has been detained in Charleston, South Carolina for the last two months related to a problem with a sister vessel. (This is one reason why you NEVER use one company to own more than one vessel)

Counterterrorism Blog has coverage of the Iranian attack on a Romanian Offshore Oil Rig. (Interesting way of negotiation those Iranians have.)

Logistics Management has a summary of the P&O NEDLLOYD GENOA container loss. Apparently MAERSK had put out a warning to better observe cargo lashing procedures prior to the accident. As it so happens, the report on the accident, mentions that there is little room for error in the design of the lashing requirements for cargo stows. A couple of overweight containers or a missing lashing rod might be all it takes for containers to end up over the side.

DefenseTech.org has news of changes to the US Navy's mine hunting capabilities.

Engadget has the story of underwater robots assisting in the oil spill near Guimaras, Philippines resulting from the sinking of the SOLAR I.

Ocean Defenders (note: Greenpeace) has the story of meeting their own Wärtsilä generator, in pieces all over the engine room. Of course, they are all over the oil slick. Check out the crew weblog for more.

USA Today has a story on the ANDREA DORIA.

EuroNews has the sinking of (10 meter long) vessel carrying over 110 illegal immigrants off Sicily, Italy with 50 either dead or missing.

SeaSpook's Rants has word of PT 728 touring the US East Coast.

Safe Cruise has word of the US Maritime Security Expo in New York on the 19th and 20th of September, with an offer of free tickets. I would like to say 'see you there' but I am off to Europe on vacation on the 19th.

Betsy's Page notes that the US Merchant Marine Academy scored as "Least Happy Campus" in Princeton Review's College Campus Survey. (If you can't be first....)

You can read my comments on Alaska's latest attempt to gouge the rest of us here.

The Stupid Shall Be Punished (Sub Blog) has coverage of difficulties during a recent Canadian Naval Operation in their far north.

The Jawa Report exposes Hezbollah's claim to sinking an Israeli warship by noting that the photo is actually of the Australian vessel HMAS TORRENS.

IMO – emergency dumping - Canada - The IMO issued a circular forwarding a communication from the Government of Canada stating that it granted two permits for emergency dumping of fish wastes to avert causing a risk to human health resulting from a build up of these wastes ashore. LC-LP.1/Circ.3 (7/26/06).

Japan wants dual registry with Panama - TOKYO 25 August – The Japanese government has announced plans to change domestic law next year to allow Japanese-controlled Panamanian-flagged vessels to fly the Japanese flag, as a security measure. In a move unconnected to separate efforts to establish a tonnage tax, the maritime bureau of Japan’s Ministry of Land, Infrastructure and Transport (MLIT) has initiated discussions with the Panama Maritime Authority (AMP) to try to develop a plan to separate a vessel’s registry and its flag for security purposes. Fairplay does not currently know the exact security aspect involved. The move is supported by Japanese ship owners, who want to maintain the cost advantages of flagging in Panama while being allowed the international protection of the Japanese flag. Panama is the most commonly used registry for Japanese-controlled international trading ships, although tax-friendly flagging schemes in Hong Kong and Singapore have recently been gaining support from Japanese owners. The Japanese proposal would deprive the AMP of jurisdiction over flag state functions. In Panama, AMP deputy administrator Carlos Raul Moreno told Fairplay today that Panama's ship registry legislation allows dual registry providing the other flag state approves the conditions set in the Panamanian law. It was confirmed that Japanese officials from MLIT were in Panama recently and discussed at length with the AMP the possibility – in the event the tonnage tax were approved – of its fleet having dual registry, although nothing concrete has come from the meetings. - Lloyd's Register