11 Buildings Were Hit in Qana, Lebanon

The blue squares are strikes on roads.

The red squares are strikes on "Building (general)" which suggests a typical building.

Now before you go claiming that the map makers are somewhat biased, keep in mind that this map came from the UN itself. The Organization is called UNOSAT, located in Geneva, Switzerland. 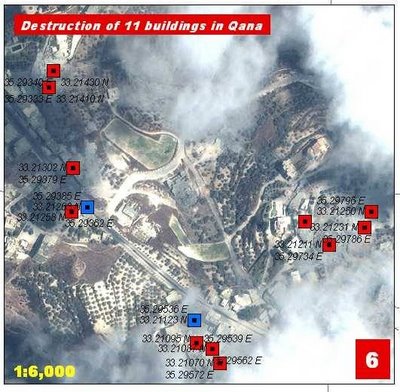 You can view the complete map from this page here.

When you look at the detail in the map, you can see how selective Israel was in its targets where buildings were completely leveled with the neighboring buildings still standing.

Here is a summary of the damage done in the Tyre region, of which Qana is a part: 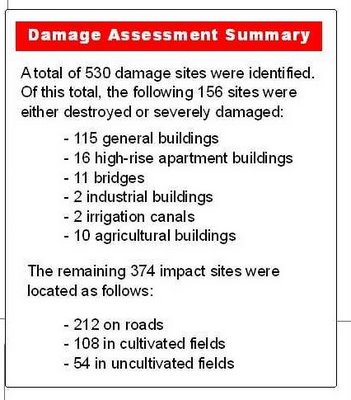 With all the publicity of targeting bridges, you would have thought that they would have attacked more in the Tyre region than 11.

A possible 1 mistake out of 11 in Qana. That would mean a hit rate of over 90%. That's pretty good, especially considering that the enemy they were fighting looks just like every other Lebanese in the country.

EUREFERENDUM has total coverage of the Qana incident. The information above fits in with their coverage starting on this post, which notes:

Whether or not that route was blocked, we do not know for certain. However, via Fred Fry, we see that the UNOSAT post conflict assessment (Inset #6), using the Ikonos Satellite, shows a large part of the road and no signs of damage. Perversely, there is one bomb strike on a road marked - on the main Tyre road a few yards north-west of the junction with the alternative route. If that had impeded traffic, it would have affected access to Qana from Tyre as well - from where "Green Helmet" and many of the rescue teams came. - EUREFERENDUM

From the post is this photo which provides a reference to where the building attack was: 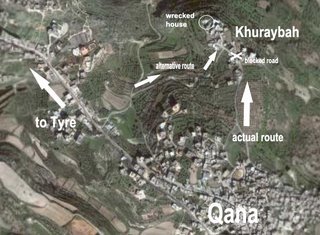 For reference, one of the Forum posters (PACIFIER) sent me a link to this overlay of the UN Sat photo to give context to local damage: 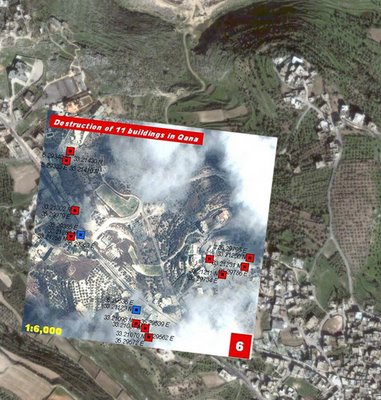 Pretty odd that the UN would completely exclude the location of the most contriversial strike of the conflict from their map. Not only is it not on the Qana inset, but it is not even on the general map either. (Should be directly above the right side of the inset box.) Also note that these attacks were not even in central Qana, but in the outskirts of the City. 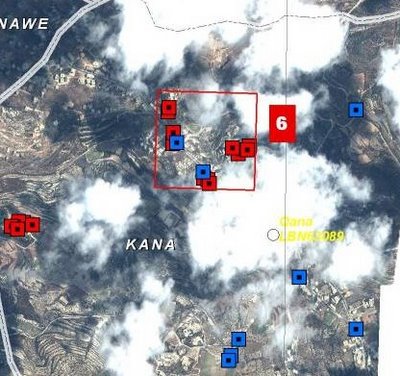