Welcome to the 22nd edition of Maritime Monday.

This Weeks Photos:
Here are some pictures of the supply vessel AMERICAN TERN during in Antarctica. The first photo is from Navsource.org here and includes a summary of the vessel. The second photo is from the website of a person who was working at the research station. His website, Images of Antarctica, contains more photos of the visit as well as of the discharge at what is probably the world's southernmost cargo terminal. 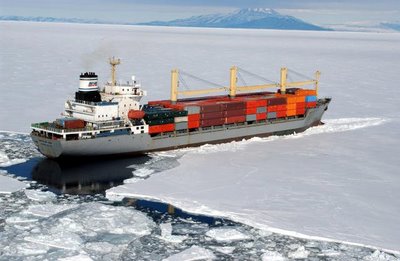 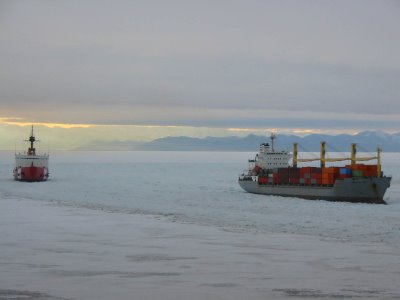 Sailors, Mariners & Warriors League has a must read in the 'troubles' of sailing in the merchant marine as a transgendered person.

Macsmind has news of delivery of humanitarian aid to Lebanon, done with the assistance of the US Navy.

Japan Probe has the shocking news of Japan being accused by Australia of catching up to $2 billion in bluefin tuna over their quota over the last 20 years. There is also an update in the post where New Zealand accuses the Australians of the same level of thievery!

The Torch has the story on how repairs to one of Canada's new submarines that was damaged in a deadly fire will not start until 2010, in an effort to save money. (Note to Canada about 'boats': If you have to ask how much it costs, then you can't afford it.)

EagleSpeak has coverage of the US Navy's Military Sealift Command tug USNS APACHE coming to the rescue of the Estonian-Flag vessel TAHOMA REEFER which suffered an engine room fire just outside the port of Monrovia, Liberia. (MSC's APACHE page here.)

Make Blog has "The most powerful diesel engine in the world" which just so happens to be used in containerships. (Many more photos here.)

Argghhh! has word that the professionalism of Mexico's Navy has been rewarded with a gift of two recently decommissioned amphibious ships from the US Navy. (formerly USS Ogden and USS Cleveland)

Safe Cruise has news of an attempted robbery of $400,000 from the SAPPHIRE PRINCESS by a member of the crew.

Thomko Petro Chemical Blog has news of rising tanker rates, due to the partial closure of the Alaska Pipeline.

For the latest on the COUGAR ACE recovery, check out the official recovery website.

DailyPress.com has news of upcoming renovation work on the NS SAVANNAH.

RadiationWorks has the history of the nuclear-powered cargo ship NS SAVANNAH.

Bloodless Coup has news of the now approved scrapping of the SS FRANCE in India.

Maritime Matters has the history of the SS FRANCE.

Where will the 'toxic' Polembros tanker ALFASHIP be scrapped? Here is a Llyods List story from May.

Here is the homepage of the Basel Action Network which is against the dumping of 'Toxic ships' in third-world countries. As would be expected, they are none-too-pleased with the SS FRANCE scrapping approval.

OzeLaw has a summary on Australia's decision to build a prison ship to hold suspected illegal fishermen and questions whether the action will bring Australia more in line with UNCLOS or in violation of it.

The Stupid Shall Be Punished (Sub Blog) has more information on the Submariner being held by the US Navy on espianage charges. (I posted on this story last week here.)

Lawyers, Gun$ and Money has the history of the last Imperial Russian Navy Battleship, the VOLYA / GENERAL ALEKSEEV in "Sunday Battleship Blogging".

Suite 101 suggests a visit to the Alaska Sea Grant Bookstore.

Domestic intermodal shipment controlled by COGSA, not Carmack - The US Court of Appeals for the Eleventh Circuit ruled that, in the absence of a separate domestic bill of lading covering the inland leg of an intermodal shipment, the Carmack Amendment does not apply to a maritime contract covering a shipment from a US possession to an inland US location where the intermodal bill of lading specifically incorporates the Carriage of Goods at Sea Act (COGSA). In the instant case, plaintiff shipper arranged with defendant maritime carrier for the shipment of a container of cigars from Puerto Rico to Tampa via Jacksonville. The bill of lading called for the container to be transported overland from Jacksonville to Tampa, incorporated COGSA, and extended the application of COGSA to the overland carrier. The container was stolen during the overland portion of the shipment. The cargo owner brought suit against the maritime carrier, who then brought in the overland carrier. Suit was brought more than one year after the cargo was scheduled for delivery. Defendants moved for summary judgment, contending that the one-year statute of limitations in COGSA applied. Plaintiff argued that the two-year statute of limitations in the Carmack Amendment applied since the loss occurred during the overland portion of the shipment. After reviewing various cases holding that, with regard to international shipments, the COGSA provision is controlling where there has not been a separate domestic bill of lading, the court decided that the same logic applied to domestic intermodal shipments. Altadis USA, Inc. v. Sea Star Line, LLC, No. 05-14988 (11th Cir., August 7, 2006). - Dennis Bryant