Exactly just how concerned should we be about this? 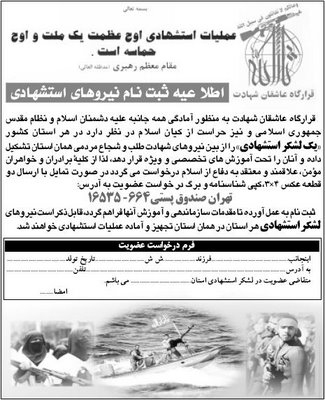 Translation (and the original ad) found on IranFocus.com:


Statement for Recruitment of Martyrdom-seeking Forces

In order to achieve all-round readiness against the enemies of Islam and the sacred Islamic Republic and to protect the foundations of Islam, the Lovers of Martyrdom Garrison plans to organise “a martyrdom-seeking division” for each province in the country from the martyrdom-seeking and brave popular forces of that province and give them specific and specialised training. We therefore request all our pious brothers and sisters, who are committed and determined to defend Islam, if willing, to submit two photographs of themselves, a copy of their identity cards, and the filled-in application form below to the following address, so that preparations for their organisation and training could begin:
P.O. BOX 16535-664, Tehran

Mohammad-Reza Jaafari, the commander of Iran’s “Lovers of Martyrdom Garrison” and a Brigadier General in the IRGC, said, “Now that America is after gaining allies against the righteous Islamic Republic and wants to attack our sanctities, members of the martyrdom-seeking garrisons across the world have been put on alert so that if the Islamic Republic of Iran receives the smallest threat, the American and Israeli strategic interests will be burnt down everywhere”.

He was speaking to a group of suicide volunteers in Shahr-Rey, on the outskirts of Tehran, on Saturday evening.

“The only tool against the enemy that we have with which we can become victorious are martyrdom-seeking operations and, God willing, our possession of faithful, brave, trained and zealous persons will give us the upper hand in the battlefield”, he said.

“America and any other power cannot win in the unbalanced war against us”.

“Upon receiving their orders, our martyrdom-seeking forces will be uncontrollable and a guerrilla war may go on in various places for years to come”, Jaafari said. - Little Green Footballs

So it seems that the ad(s) back up the threats of the Iranian Government. Then we have this 'response' coming from the Iranian President at the end of August to the UN Security Council Resolution. Who can guess what kind of response he's planning. I would think that if he was going to attack Israel or anyone for that matter, he would have used the fighting in Lebanon as an excuse already. Maybe they plan to go nuclear by exploding a nuke. Perhaps it is something less dramatic like pulling out of the non-proliferation treaty. If that were the case, they could have done that weeks ago already. So it's not very likely. One thing for sure, it is probably not going to be pretty.
Could it be that Iran had knowledge of the UK liquid explosive plot? The latest word was that the attacks were to start on the 16th, but the date was pushed forward due to the capture of one of the planners. Might the original date have been set for the end of August? If not, all we can do is hope that Western Intelligence is aware of what he's up to and are prepared to stop it.
Notice the logo in the ad. Doesn't it look somewhat like the Hezbollah logo? 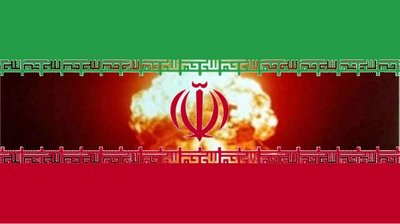